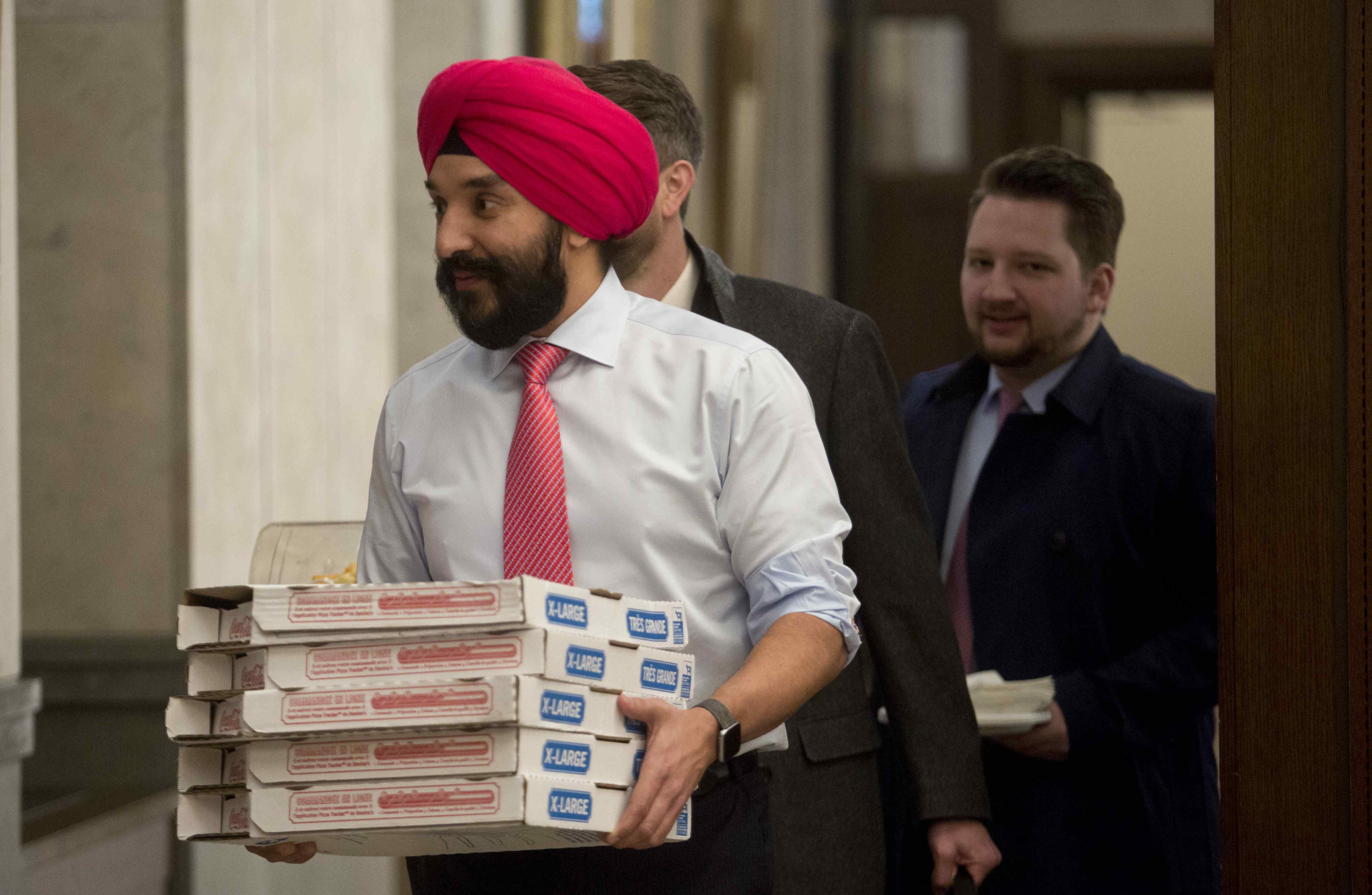 The decision by Teck Resources to abandon its proposed Frontier oilsands mine has dominated Canadian media for two days, but by Tuesday evening some MPs were wondering why their colleagues were still looking in the rearview mirror.

“How does this debate constitute an emergency?” wondered NDP MP Laurel Collins, more than an hour into a late-night House of Commons session Feb. 25 concerning Teck’s announcement that it made on Feb. 23.

“Teck pulled out of a project that was a bad decision economically given their business case, relied on extremely high oil prices for decades to come — over $95 a barrel, much higher than what Teck told their investors and almost double what our oil prices are currently — and it was an even worse environmental decision.”

The House held an “emergency debate” on the issue of Frontier after a request for one by Conservative natural resource critic Shannon Stubbs was granted by the speaker.

It went on for hours on Tuesday, beginning at about 6:15 p.m. Eastern and still going more than three hours later, at the time of publication. Earlier in the evening, Industry Minister Navdeep Bains could be seen carrying boxes of pizza into the House lobby.

In a public letter to Environment and Climate Change Minister Jonathan Wilkinson, Teck explained that it could not proceed without more “clarity” as to how Canada’s climate goals — such as Ottawa’s desire to achieve net-zero emissions by 2050 — fit with the nation’s apparent ambition to continue exploiting its oil and gas reserves.

The project also faced serious obstacles, according to Teck’s own CEO Don Lindsay, in terms of a lack of investment partners, low oil prices and sparse pipeline capacity.

But the debate showed how the federal political parties all see the Teck decision a bit differently. For the Conservatives, the blame lay squarely at the feet of Prime Minister Justin Trudeau, and they used Tuesday’s debate to make sure Canadians were aware of that position.

Stubbs decried a long list of Liberal misdeeds, including “attacks on oil and gas,” “anti-business” legislation, “layers of new taxes” and “escalating uncertainty,” all of which she described as “attacks on all of Canada’s economy.”

“Teck pulled out of a project that was a bad decision economically given their business case...and it was an even worse environmental decision," said NDP MP Laurel Collins during an emergency debate in the House of Commons on Tuesday.

The Liberal government’s “attacks on the oilsands” were a central issue underpinning everything from the loss of capital investment in the sector to an increase in employment insurance claims, bankruptcies, real estate vacancies and food bank use, she said.

She even attacked the media: “While Albertans wonder why oil and gas job losses and all the related social consequences — suicides, family breakdowns, crime — don’t seem to be occupying the permanent attention of national media and commentators, the cancellation of Teck just adds to an already-existing pattern of crisis, and it has been escalating since 2015.”

But Stubbs was challenged by Liberal MP Wayne Easter, who said he had supported the Frontier mine but was worried that the debate was going to “fan the flames of rhetoric on both sides.”

“There are already 20 oilsands projects in the mill with approval,” said Easter. “Trying to blame everything on the prime minister is not the answer. Does she really think that the price of oil in the market had nothing to do with this decision?”

That was the Tory position, and they repeated it. “Anyone who believes this mine was cancelled for market reasons is dreaming in technicolor,” said Pierre Poilievre later in the evening.

Yet Collins was not alone in wondering why the Conservatives had asked for a House of Commons emergency debate on a decision by a private company that had already been announced.

“Why are we here?” wondered Bloc Québécois MP Mario Simard. Teck itself decided the project wasn’t viable, he noted. “The main problem with Alberta is they've put all their eggs in one basket.”

For their part, the LIberals responded to the emergency debate by touting their climate plan and trying to shift the focus to fighting carbon pollution.

Wilkinson acknowledged the “tens of thousands of well-paying middle-class jobs” provided by the energy sector. But “at the same time” he said, the government was trying to tackle climate change, as “the existential threat of our age.”

He raised the fact that Canada is heating up twice as fast as the rest of the world, according to government research. “It is no wonder that youth around the world are fed up with our generation not acting on the science we have before us,” said Wilkinson. He said Canadians voted in 2019 overwhelmingly for parties that offered “ambitious climate plans.”

Investors are signaling that countries need to reduce their environmental footprint, Wilkinson added. “We have made tremendous progress in addressing greenhouse gas emissions since 2015,” said the minister, listing off the government’s policies including electric vehicle and public transit investments, the planned coal power phase-out, energy efficiency standards for buildings and the price on pollution.

“We are finally seeing a decline in absolute emissions and projections are on a downward trend,” he said. But developing a plan to achieve net-zero carbon emissions by 2050, as the Trudeau government has said it wants to do, “will be even harder, given our vast geography, northern climate, and reliance on a resource economy.”

Achieving this goal requires a “national consensus,” Wilkinson argued, a “team effort” that “must include” the oil and gas sector, provinces and territories, energy companies, explorers, their employees, and Canadians who drive their cars and heat their homes with fossil fuels.

After Wilkinson was finished, Conservative MP Kelly McCauley stood up to thank the minister “for his very well-read speech.”

“It’s certainly one of the best-read speeches from the PMO (Prime Minister’s Office) I’ve heard in a long time,” he said.

That irked Wilkinson, as he stood up later to clear the record.

“I actually wrote that speech, it wasn’t the prime minister’s office,” said the minister.

Great article.
It's unbelievable that the CONS can't accept truth. They got their heads buried deep in the Tarsands.
Teck made a business decision.
Based on the real science and the business model projections.
Climate change must be addressed and the blame falls squarely on the shoulders of CON Jason Kenney. The carbon tax was supported by the Tarsands companies. He gutted responsible legislation. He cost people their jobs and brought in his recession. He's stealing albertans pensions for Tarsands and corporate welfare giveaway.
The emergency debate for a businesses decision. Ugh !! What a travesty.
CONS whine alot.
The country loses big.
Teck's moved on. They ain't looking in rearview mirror. CONS are frozen in the last century.

This is not an emergency, it

This is not an emergency, it is a blessing unless we want to make this planet uninhabitable. Was there all this weeping and wailing when the costal forest industry basically shut down in BC. It made towns like Port Alberni into nearly ghost towns. I feel great compassion for the Alberta workers but if we want earth to support all life these decisions have to be accepted. This wasn’t a government decision, it was an economic decision by Teck. To carry on with these oil and gas projects is the same as Australia opening new coal mines while the country burns. People need to stop being so short sighted and think in the long term if Earth is going to be habitable for future generations. This is not just Alberta this is the world.

As an Albertan, I am fed up

As an Albertan, I am fed up with the CONS. Shannon Stubbs is so concerned about “attacks” by Liberals on the Oil and Gas sector. What about those of us in the public sector? Many of us women, what about our Mental Health? Of course we need to support the workers of the oil and gas sector transition and that is why a Green New Deal and a just transition are so essential. Not the policies in my province where they keep propping up the billionaires with subsidies and tax breaks all while cutting services that so many will need.

We've made great progress since 2015 and have *reduced absolute emissions*???? Really, Mr. Minister???