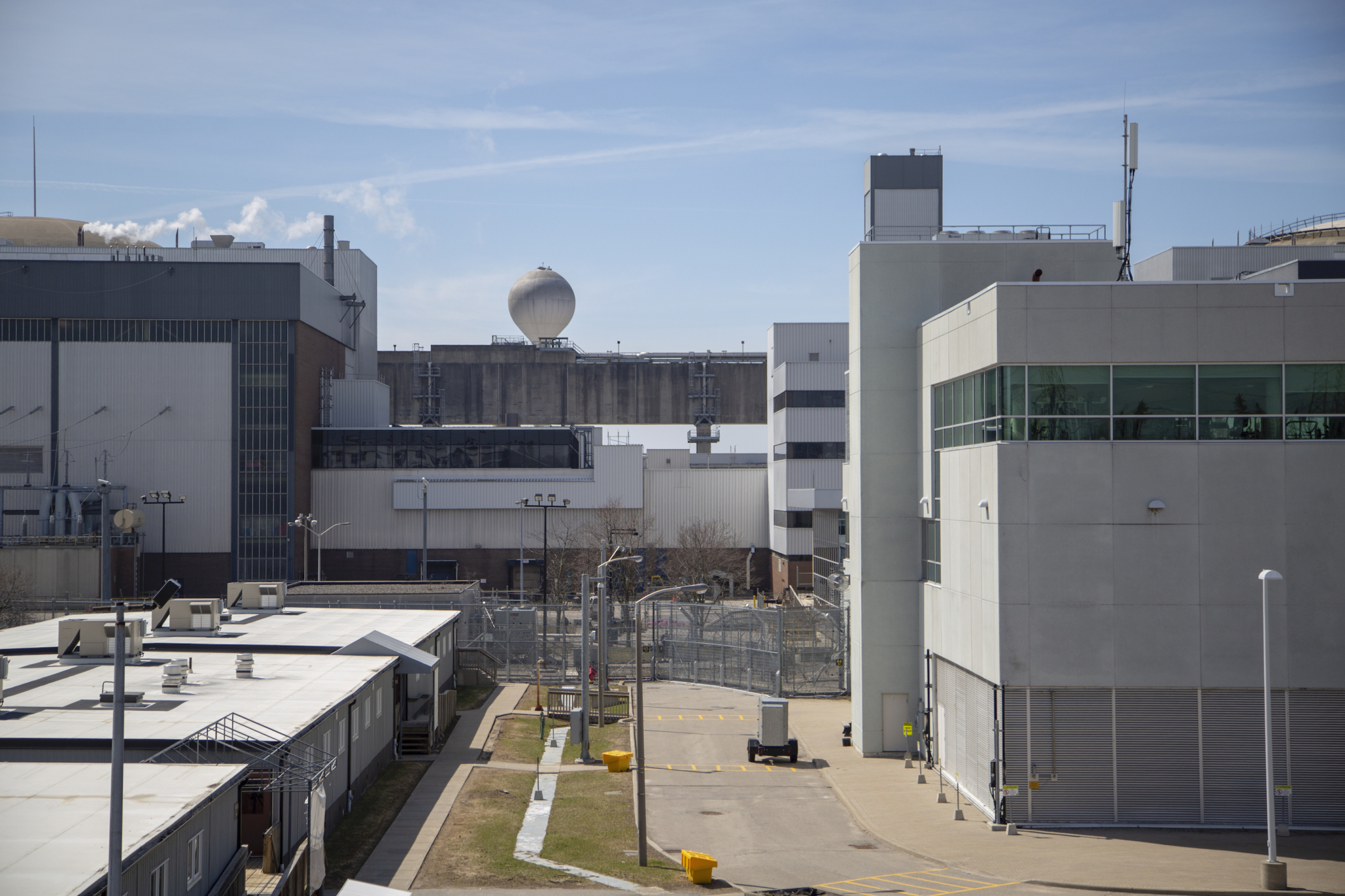 A view of the Pickering Nuclear Generating Station for the National Observer on April 17, 2019. Photo by Carlos Osorio
Previous story
Next story

A breakdown in communications exacerbated the human error behind a false emergency alert about an incident at Ontario's Pickering nuclear plant issued last month, according to a government-led review of the mistake.

In the early hours of Sunday, Jan. 12 all of Ontario was erroneously told that "an incident was reported at the Pickering Nuclear Generating Station." It took almost two hours for a second mass alert to be issued telling everyone the first alert was sent by mistake.

The delay was due to confusion and disagreement over whether a second alert needed to be sent as widely as the first, and a lack of direction and procedural documentation about how to do that, according to the findings of a government-led investigation of the situation released on Thursday.

That investigation said "procedural gaps, lack of training, lack of familiarity with the Alert Ready system and communication failures" all contributed to the snafu. 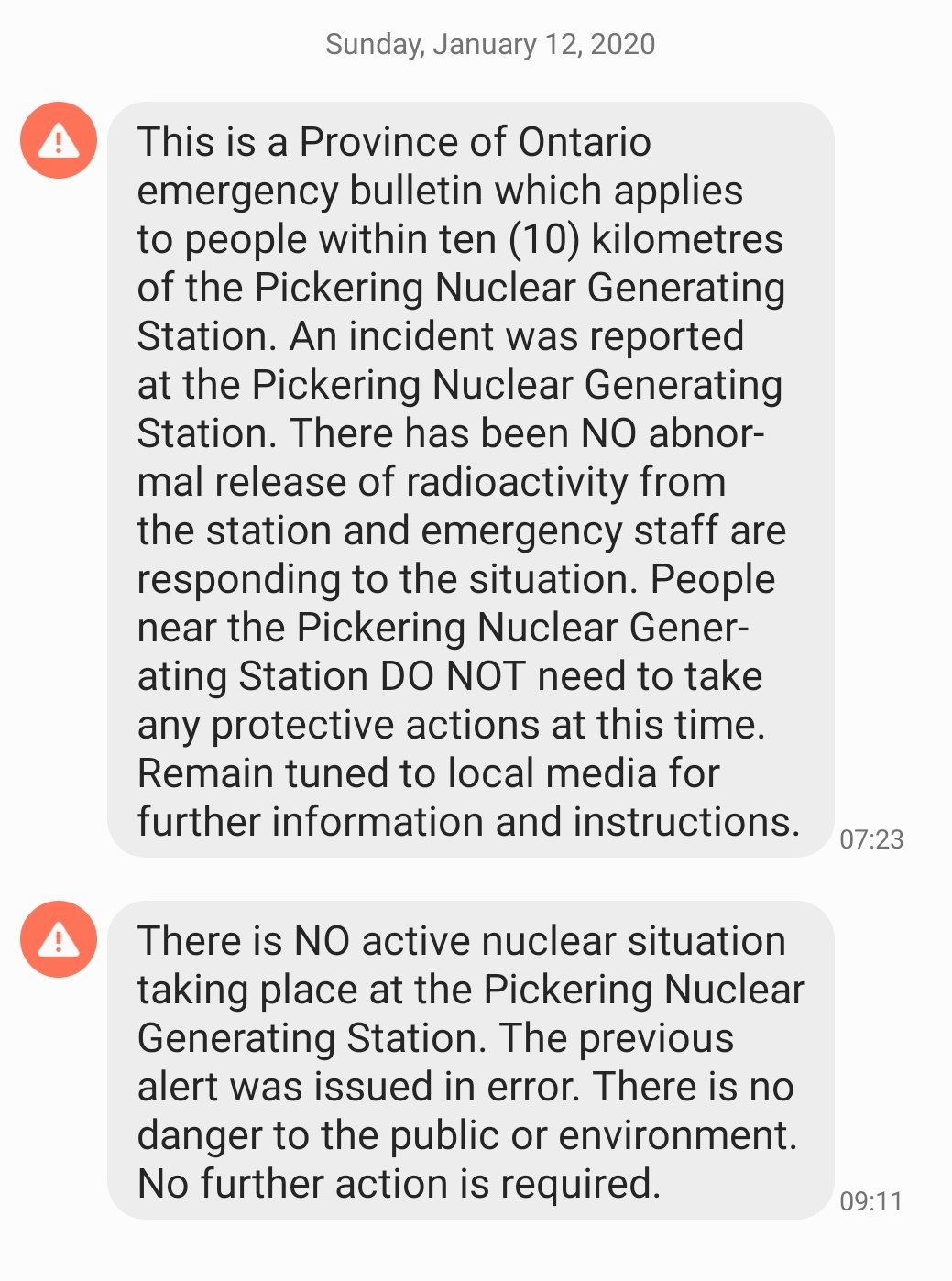 A screenshot of the two alerts issued across Ontario on January 12, 2020.

The report found that a recently-hired duty officer had accidently sent the live alert when it was intended to be sent on a training system. It found that the process and prompts for each system are "nearly identical with the exception of a final confirmation prompt on the live system."

Neither that employee nor a second duty officer knew how to fix the error and sought the help of supervisors, who were unable to provide clear direction.

"The supervisors were uncertain about whether or how to issue a second broadcast intrusive alert," the report said.

The report also found that employees at Pelmorex, the private company that operates the Alert Ready system, consistently advised against sending a second alert at the same level of priority as the first.

A breakdown in communication exacerbated the human error behind an erroneous alert about an incident at Ontario's Pickering nuclear plant, a government investigation found.

Pelmorex defended its role in the situation by saying it was merely offering its opinion.

“We provided our recommendation,” it said in a statement. “However, it is at the sole discretion of the authorized government issuer to determine if and when to issue a broadcast intrusive ‘End of Alert’ message.”

The company added that it was reviewing the report and would work with government partners “to ensure that the Alert Ready system continues to be used, as intended, to notify the public of life-threatening situations.”

Adding to the confusion, senior public officials initially thought the alert was related to an unrelated loss of power at the plant during planning maintenance.

Duty officers operating the alert system at Emergency Management Ontario's Provincial Emergency Operations Centre are expected to undertake four weeks of training. But the pair who were on shift that day, both hired on Nov. 4 last year, received a shortened version because they were put to work dealing with a provincial response to flooding.

Mike Schreiner, the leader of the Green Party of Ontario, said it was alarming that flaws in the system left people in the dark for nearly two hours.

“Clearly there were significant gaps in protocol and procedures that must immediately be addressed to ensure this does not happen again,” he said.

"I am confident the actions taken to address the gaps brought to light by this investigation will make Ontario's emergency management system even stronger," she said.

"Ontario's emergency response experts and its network of front-line emergency responders are world class and stand ready to respond to emergencies on any scale," Jones said in a statement.

But that was not the view of the International Atomic Energy Agency, which in a report issued earlier this month said that Ontario does not provide clear guidance and assurance for the protection of emergency workers and helpers in the event of a nuclear emergency, and that the province has not trained designated medical workers to deal with radiation injuries.

Editor’s note: This article was updated at 5:11 p.m. Eastern with a response from Pelmorex and comment from Green Party leader Mike Schreiner.

When I think of Nukes, I

When I think of Nukes, I think of Homer Simpson, and worry. When Pickering was brand new, they wanted a see-through model of the works for their lobby. It was built by Henry Persig & co. They wanted to do the installation themselves, so Persig's asked if they knew how to drill the mounting holes in Plexiglas. They scoffed, but then returned the model for expensive repairs to the base, with marks for the hole locations.