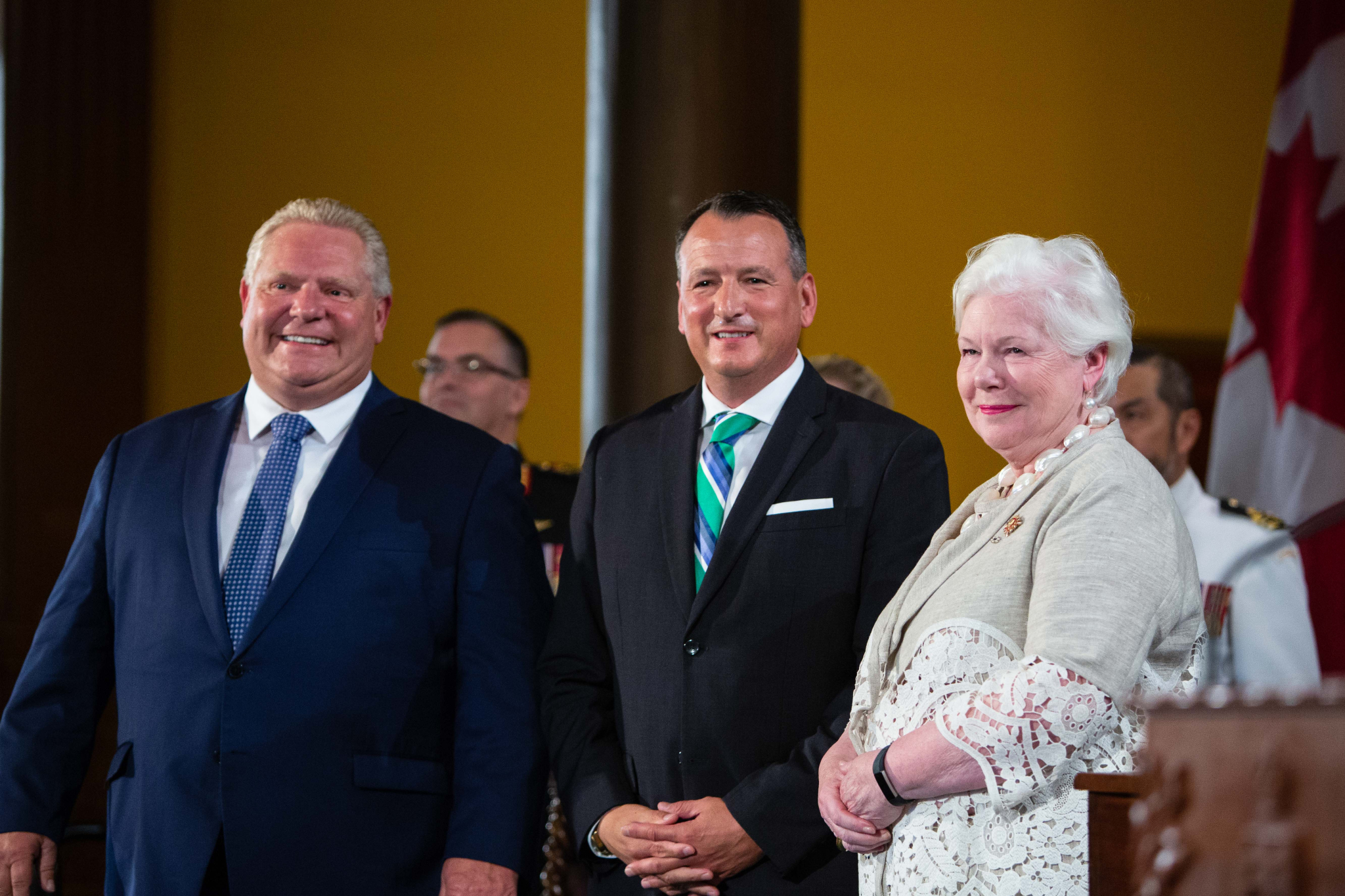 The Pickering nuclear power plant is already operating beyond the terms of its natural life. Critics warn that the Ford government’s move to eke out a little bit more power from the site is playing with fire.

Energy Minister Greg Rickford said on Tuesday that Ontario Power Generation, the provincial agency that operates the site, had proposed keeping four of its six operational reactors going for one year past the already-extended deadline of 2024.

But critics warn that even one extra year of operations at the site is a risky undertaking.

“They are already skating on thin ice, and this is only going to make it even thinner ice,” said Gordon Edwards, a scientist and the founder of the Canadian Coalition for Nuclear Responsibility.

That’s because the zirconium alloy used in the hundreds of tubes holding nuclear fuel in Pickering’s reactors are exposed to intense radiation, very hot water, and high pressure, he said.

It costs billions of dollars to replace the tubing, which is what is being done at the refurbishments at the two other nuclear plants in Ontario, in Darlington and on the Bruce Peninsula.

Anti-nuclear advocates at Ontario Clean Air Alliance said in response to the extension news that Pickering “relies on seriously outdated technology” and is designed in such a way that a problem with any one of its six operational reactors could create a cascading effect on the others.

Angela Bischoff, a director at the group, also said that the plant has been plagued with safety problems over the years, including an accident in 1983 in which a pressure tube suffered a metre-long rupture and a loss of coolant. Coolant loss can cause a surge of power to occur in the reactor core. The site was shut down and two of the four reactors were eventually replaced (and two mothballed) at a cost of $1 billion.

Then in 1994, another pipe break resulted in a major loss of coolant and a spill of 185 tonnes of heavy water. Emergency measures to cool the core averted a meltdown.

The news that the Ford government was looking to extend the Pickering plant’s operational life was first reported by the Toronto Star on Monday.

The proposal would need to receive approval from the industry’s federal regulator, the Canadian Nuclear Safety Commission (CNSC).

A spokesperson for the regulator said it has not yet received notice that OPG intends to amend the terms of its licence. If and when such a notice is received, it would be reviewed by staff who would then make recommendations to the commission.

The application would also be subject to a public hearing “focused on safe operations and the protection of health, safety and environment,” senior communications advisor Isabelle Roy wrote in an email.

“It is important to emphasize and reiterate that the Commission will not issue a licence amendment, or any licence, unless it is satisfied that it is safe to do so and that there are adequate measures for the protection of the environment, the health and safety of persons and the maintenance of national security and international obligations,” she added.

Pickering was initially expected to safely produce power for some 230,000 full power equivalent hours, which is equal to about 30 years of typical operation.

It is not clear if the Ford government’s proposal will include exceeding that limit.

When Quebec closed its sole nuclear facility, Gentilly-2, in December 2012 it was approaching the 210,000 full power equivalent hours it was designed to withstand.

Thierry Vandal, Hydro-Quebec’s then-CEO, told the province’s National Assembly soon after that he was no more inclined to operate it past that limit than he would “climb onto an airplane that does not have its permits and that does not meet the standards.”

Green Party leader Mike Schreiner said he is “not ideologically opposed to nuclear” but warned that “you don’t want to tempt fate or roll the dice too many times before something goes wrong.”

“It is well past its best-before date,” he said. “It seems really irresponsible on the premier’s part.”

He also pointed out that the Ford government had promised to lower electricity costs, yet is choosing expensive nuclear refurbishments and extensions over cheaper alternatives. These include efforts to improve energy efficiency and conservation, for which Ford has cut funding. Ford’s government has also spent at least $231 million to cancel hundreds of wind and solar projects, including two that were nearing completion, and rejected a deal with Quebec to import some of its excess hydro-electric power.

“They’re chasing nuclear dreams when we have lower cost options available to us,” he said.

Editor's note: This article was updated at 5:25 p.m. on January 15, 2020 to include a response from the Canadian Nuclear Safety Commission.

Are there really no honest nuclear power critics?

Graham, could you please

Graham, could you please explain what you mean by "honest"?

Do you mean critics who will talk about the full nuclear lifecycle costs, including; the cleanup of mine tailings and fuel refining sites, the as-yet-unknown costs of final high-level waste storage, and the actual carbon footprint of fuel production and the construction and ultimate decommissioning of the plant?

Not to mention the potential human and economic costs to the GTA of a serious accident at Pickering, and the subsequent cleanup? (Imagine the indefinite closure of the 401 and 407, and Pickering, Ajax, Whitby, Oshawa, Scarborough and/or Markham rendered uninhabitable for years or decades, plus the surrounding countryside and farmland).

If that's what you mean, there are many such critics out there.

Or by "honest" do you mean parroting the current campaign to greenwash nuclear power as a carbon-free solution to climate change, by simply ignoring all of the above issues?

See my answer at https://www

See my answer at https://www.quora.com/Why-isnt-spent-nuclear-fuel-stored-underwater-on-t... .

The concern about mine tailings would seem genuine if it applied equally to uranium in phosphate fertilizer and radon in natural gas combustion effluent.

I just noticed this by Sharp above the line: "Coolant loss can cause a surge of power to occur in the reactor core." That would be a surge downwards, of course.

Of course there are many such critics. As many as money can buy.

The problem with CANDU is

The problem with CANDU is "positive coefficient of void reactivity" which means that a sudden loss of coolant from a pressure tube break would cause a surge of power. As the industry points out, the multiple safety shutdown systems exist to cover that eventuality. Nonetheless the (literally) kilometers of piping make such a break likely.
The other problem with pressure tubes is that they sag over time (they reach horizontally from one face to the other and carry the fuel bundles) and cause the ends to pull away from the end fittings. A retired nuclear engineer told me privately that the tubes in Pickering are like "kolbassa sausages".

NO, not a surge downwards.

NO, not a surge downwards. Do we need to explain this step by step? All right. Nuclear power plants work by having radioactive materials undergo enough fission to get very, very hot. Running water by that heat causes it to boil into steam, the pressure from which turns turbines which generate electricity. Now, if you have a loss of COOLANT, what would happen? Very good, the radioactive materials would GET HOTTER. Then the water would turn into steam faster, GENERATING MORE POWER. A "surge" of more power.
Do you understand now?

Nuclear power plants are always in a careful balancing act. If you cool the fissionable materials too much, they don't generate electricity. If you don't cool them enough, power surges are the least of the possible problems. If you slow down the nuclear reaction too far, again they will cool down and generate less electricity. But if you let it speed up too much, they will not just overheat but the reaction will accelerate, feeding on itself--more flying particles break more atoms which generate more flying particles, at which point the sky's the limit in terms of what can go bad. It's a tricky business, which is best not done with decrepit equipment. And the radiation makes equipment get decrepit much faster.

So, $15 billion to fix these pipes, huh? How many solar panels or wind farms would that buy? And we shouldn't be under the illusion that the coolant pipes are the only things that have been compromised by the passage of time and the stress of heat and radiation. There's plenty other stuff in a nuclear plant that rots . . . containment vessels, generators and who knows what all.

hard to believe we elected a

hard to believe we elected a government with so little knowledge of the energy sector. Or any other sector . The public service could , and tried to educate them but this is getting ridiculous. We need to lock in hydro from Quebec asap and if we want homegrown power get those wind and solar projects back on the work-order.

Getting hydro from Quebec

Getting hydro from Quebec seems like a win-win-win. Good for Ontario, Good for Quebec. And good for Canada’s climate goals. Building transmission infrastructure might not be cheap, but likely cheaper than dealing with the disruption caused by age-related reactor failure. No pun intended but it is literally the difference between planning for the future vs simply reacting to it.

This news is certainly

This news is certainly concerning, and any attempt to further extend the life should be carefully analyzed.

Having said that, the article is unnecessarily alarmist and hyperbolic. The Fukushima reactor was one of the earliest boiling water designs, one known to be dangerous. CANDU by contrast has natural safe degradation modes. Furthermore, the large cylinder attached to the site is partially evacuated and could pull in any reactor spill.