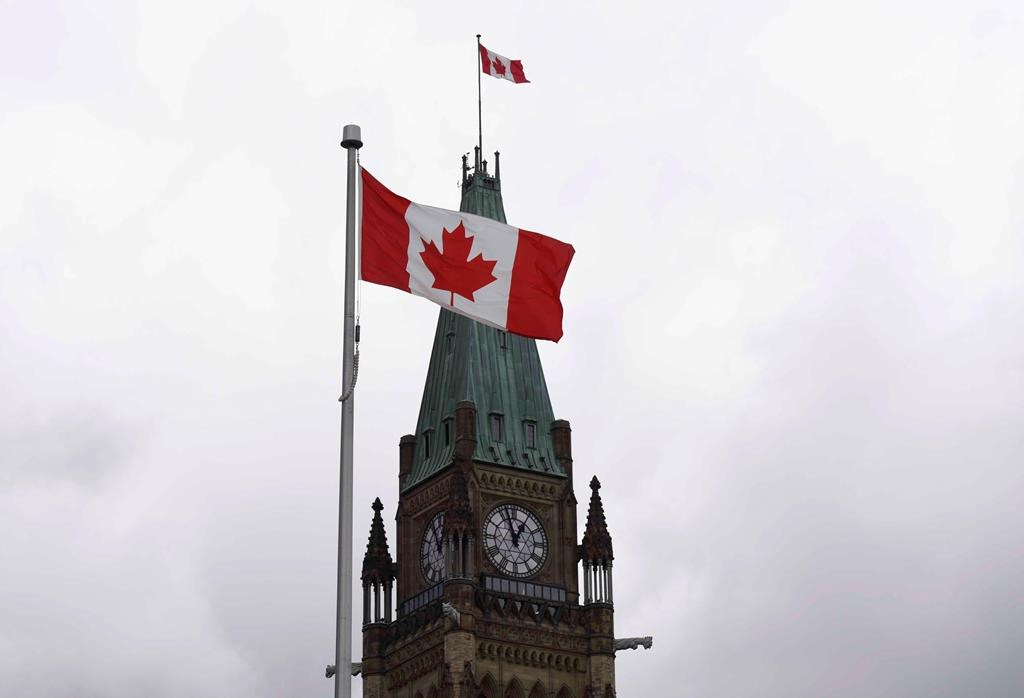 Centre Block's Peace Tower is shown through the gates of Parliament Hill in Ottawa on Tuesday, April 21, 2015. File photo by The Canadian Press/Justin Tang
Previous story
Next story

The federal Liberals could add billions in spending and keep federal finances sustainable over the long run, Parliament's budget watchdog says in a report that begins to set the stage for Finance Minister Bill Morneau's upcoming budget plan.

Parliamentary budget officer Yves Giroux says based on current policies and programs, the government could permanently increase spending or reduce taxes by around $41 billion and maintain its current debt-to-GDP ratio over the long term.

That is likely good news for the Liberal government, which has been criticized by the Opposition Conservatives for ringing up tens of billions of dollars in additional federal debt in recent years even as it looks to introduce a new budget in the coming weeks.

Giroux told The Canadian Press in an interview the government has fiscal wiggle room to increase spending under current conditions, but warned "that could change if the government were to change program parameters or go on a spending spree of some kind or establish new programs."

Next year's deficit is expected to be $28.1 billion, before accounting for election promises the Liberals will unveil in their 2020 budget, such as a national pharmacare program.

Morneau told the House of Commons finance committee earlier this month that he was working through the budget to "demonstrate fiscal responsibility" and ensure "Canadians can meet affordability challenges." The government doesn't foresee a radical cut in spending, he said at the time.

"Clearly, taking a significant amount out of the economy rapidly would have a negative impact on growth," Morneau said, adding a few seconds later: "It's not a path that we intend to go down."

The coming days will provide more inputs into the government's calculations. On Friday, Statistics Canada will unveil how the economy fared in the last three months of 2019. Then next week, the Bank of Canada unveils a decision on its trendsetting interest rate.

Forecasts from the bank and Giroux suggest Friday's economic figures will show a slowdown, due in part to a shutdown in traffic during a CN Rail strike in November, that will spill into the first few months of 2020.

Further dampening economic expectations is the novel coronavirus outbreak that has shut down Chinese factories that Canadian companies rely on, disrupted exports to China and impacted global supply chains.

"We were already expecting this year's federal budget to lean into stimulus, with spending and the deficit ramping up, and deepening coronavirus concerns simply reinforce that view," BMO chief economist Douglas Porter wrote in a research note this week.

The confluence of COVID-19 and continued demonstrations snarling rail traffic — in a show of support with Wet'suwet'en hereditary chiefs in B.C. protesting a natural gas pipeline through their territory — has unnerved business groups who have asked Morneau to rethink his budget plan.

Goldy Hyder, president of the Business Council of Canada, told Morneau in a letter last week that a weak economy would make it difficult to "sustain the vital public services on which Canadians rely" and meet the challenges of climate change and an aging population.

In an interview, he said the Liberals appear to be taking their time on the budget that isn't expected until the end of March.

"I don't think this government, I certainly don't think this finance minister, is out to add even more to the deficit at this time and they have to be seriously concerned as to the impact on revenues," Hyder said.

"Reassess and rethink where you are today — not where you were in October."

Giroux's report was less rosy for provinces and territories, which could put pressure on the federal government to help them out.

The budget officer said provinces and territories would have to either raise taxes, reduce spending or a combination of the two to bridge a $6-billion gap to long-term sustainability.

The key driver, Giroux said, was increased pressure for health-care services from growing ranks of seniors.

He said an "obvious area" for the federal government to help would be to change how it transfers money to provinces and territories for programs, which could gobble up some of its own fiscal wiggle room.

This report by The Canadian Press was first published Feb. 27, 2020.