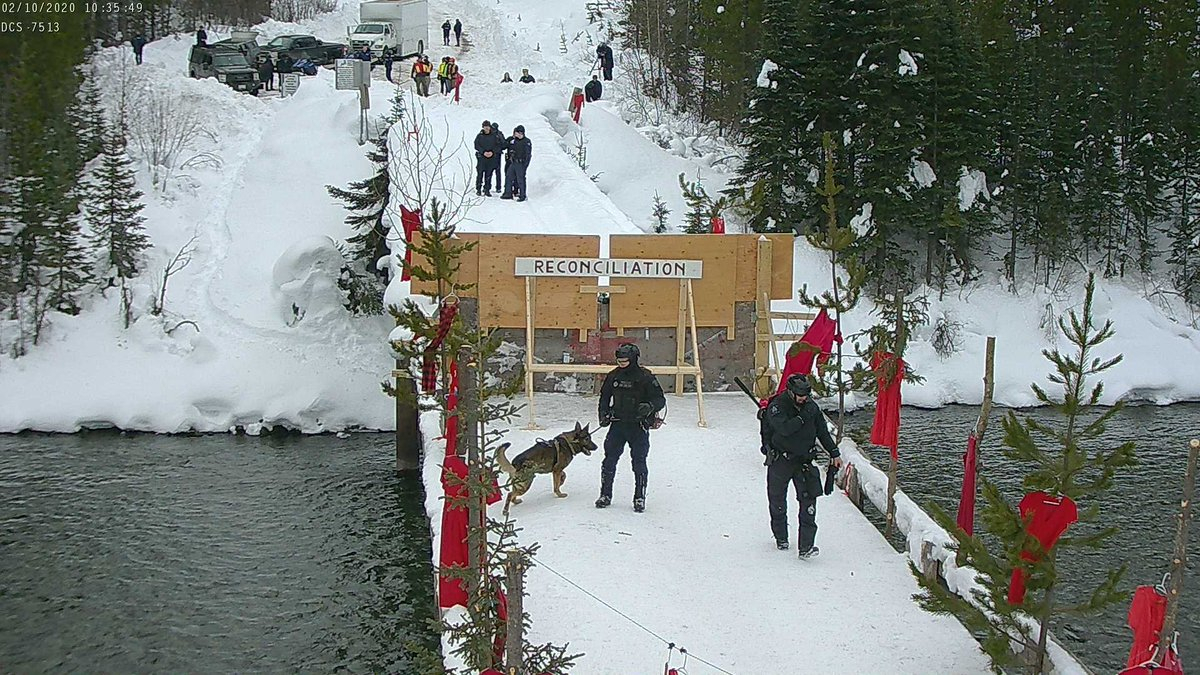 Hereditary chiefs of the Wet’suwet’en Nation struck a proposed deal with British Columbia and federal officials over the weekend in a land title dispute that inspired nationwide rail blockades.

But the tentative agreement, announced Sunday after three days of talks between the hereditary chiefs and officials from the federal and provincial governments, doesn’t address the pipeline at the centre of the controversy. That means the Wet’suwet’en solidarity blockades are unlikely to stop, for now.

“We’re not standing down, and we’re not asking anybody else to stand down either,” said Molly Wickham, also known as Sleydo, a spokesperson for Gidimt’en, a Wet’suwet’en clan.

Several Wet’suwet’en hereditary chiefs are fighting to stop the Coastal GasLink pipeline, a planned natural gas project that’s slated to run through the nation’s unceded traditional territory in northern B.C. The solidarity blockades were sparked last month after the RCMP raided Wet’suwet’en camps to clear pipeline opponents out of the project's path.

Here’s what you need to know about the draft agreement, and how it impacts Coastal GasLink and the Wet'suwet'en solidarity blockades.

The proposed agreement does not address Coastal GasLink directly, focusing instead on the deeper issue of Wet’suwet’en governance and the nation’s right to its traditional territory. The draft agreement essentially sets ground rules for more discussions over what to do about the controversial pipeline.

A 1997 Supreme Court of Canada decision, Delgamuukw v. British Columbia, has previously affirmed that the Wet’suwet’en have the right to their land. But the court didn’t resolve several key questions, leaving the nation to either negotiate with the B.C. government or go back for a costly second trial, neither of which happened.

Now, 23 years later, the proposed arrangement attempts to pick up where the Delgamuukw decision left off.

The hereditary chiefs, federal Crown-Indigenous Relations Minister Carolyn Bennett and her provincial counterpart Scott Fraser announced the broad intent of the draft deal Sunday, but didn't divulge details. Before the proposed agreement is shared publicly, the nation will review it in the feast hall ⁠— where Wet’suwet’en hereditary leaders typically make major decisions ⁠— in accordance with Anuk nu'at'en, or Wet'suwet'en law, in the next few weeks.

On Sunday, Hereditary Chief Woos said the proposed agreement is a milestone, but the “degree of satisfaction is not what we expected.”

Canada’s colonial Indian Act also created elected band councils with jurisdiction over reserve lands. Some elected councils have supported the project, though the reserve lands aren’t adjacent to the pipeline.

What does this mean for Coastal GasLink?

We appreciate the dialogue that has occurred over the past several days between the Wet'suwet'en Hereditary Chiefs and Government representatives. Read our full statement following the conclusion of discussions here: https://t.co/Fqimt0e4R2 #CoastalGaslink #Wetsuweten #bcpoli

Even if the Wet’suwet’en and the B.C. and federal governments sign off on the proposed deal, it may not affect the dispute over Coastal GasLink.

Meanwhile, the hereditary chiefs who oppose Coastal GasLink have said they are unwilling to allow the pipeline to proceed.

It isn’t clear when pipeline construction could begin. Last month, B.C.’s Environmental Assessment Office (EAO) rejected a key report from Coastal GasLink Ltd., a subsidiary of TC Energy (formerly known as TransCanada), which will construct and operate the Coastal GasLink pipeline. The report must be approved before the company can begin building an 18-kilometre portion of the pipeline in Wet’suwet’en territory, near the Morice River (also known as Wedzin Kwah). The company now has 30 days to go back and do more consultation with the Wet’suwet’en.

Aside from area affected by the EAO's rejection of the report, Coastal GasLink’s backers are free to do construction work on Wet'suwet'en territory. In the area where it's not allowed to do construction work, the company can still complete other do pre-construction tasks like surveying, the B.C. Ministry of Environment confirmed to National Observer Monday.

Last week, work stopped on Wet’suwet’en territory to allow for talks between the Wet’suwet’en and the Canadian governments.

After the tentative deal was announced, the company said it would resume “construction activities” Monday. The company didn’t specify what that entailled, and didn't immediately respond to a request for clarification from National Observer Monday.

Why aren’t the blockades coming down?

Train stopped on the tracks. pic.twitter.com/d0CCGeB06V

The blockades have led to outcry from several industries that have struggled to move goods, upping pressure on political leaders to resolve the situation.

More Indigenous-led demonstrations have sprung up even as authorities attempt to shut them down with arrests and court injunctions. The pipeline opponents organizing the blockades have said they won’t stop until the Wet’suwet’en hereditary chiefs’ demands are met.

That hasn’t worked out so far. The chiefs have asked for Coastal GasLink to be halted ⁠— something the B.C. government has said it’s unwilling to do.

They’ve also asked the RCMP to leave Wet’suwet’en territory. The Mounties temporarily stopped patrolling the area to allow for talks between the chiefs and the Canadian governments, but it’s not clear whether officers will return now that initial discussions have ended.

Two of the most prominent blockades, Mohawk-led demonstrations in Belleville, Ont., and Kahnawake, Que., remain in place. A separate one outside of Montreal temporarily blocked VIA Rail service Monday.

Tsake'za Sleydo': We're not resting, we're not giving up, we're not standing down, we're not asking other people to stand down. (2/3) #WetsuwetenStrong pic.twitter.com/7wNFksZwob

In a press release Monday, Canadians United Against Hate warned of death threats, overt racist acts, and acts of hate against Indigenous people protesting Coastal GasLink.

Last week, a bomb threat was reported against the Mohawks of Tyendinaga, who have organized the rail blockade near Belleville. A similar threat was made against Unist’ot’en, a Wet’suwet’en house group.

Some threats have included calls for vigilante violence against protestors, the online media outlet Ricochet reported.

Dini'ze Woos: The Hereditary Chiefs are opposed to any pipeline going through their territory (1/3)#WetsuwetenStrong pic.twitter.com/tRm6mAa6Y5

It’s not exactly clear. The Wet’suwet’en hereditary chiefs haven’t said when the community will discuss the tentative agreement.

If the clans approve, federal and provincial officials will return to sign the deal. If not, it’s unclear what will happen.

More discussions will be required either way to sort out what to do about Coastal GasLink.

For now, pipeline opponents have planned solidarity actions in various cities through the first week of March.

Well, if they sign off on the same kind of deal that other first nations were forced into, they can say goodbye to anything more control than a right to protest expropriation, which is what they've pretty much got right now, with their territorial boundaries still in question.
I hope they get really good legal counsel before signing off on anything.