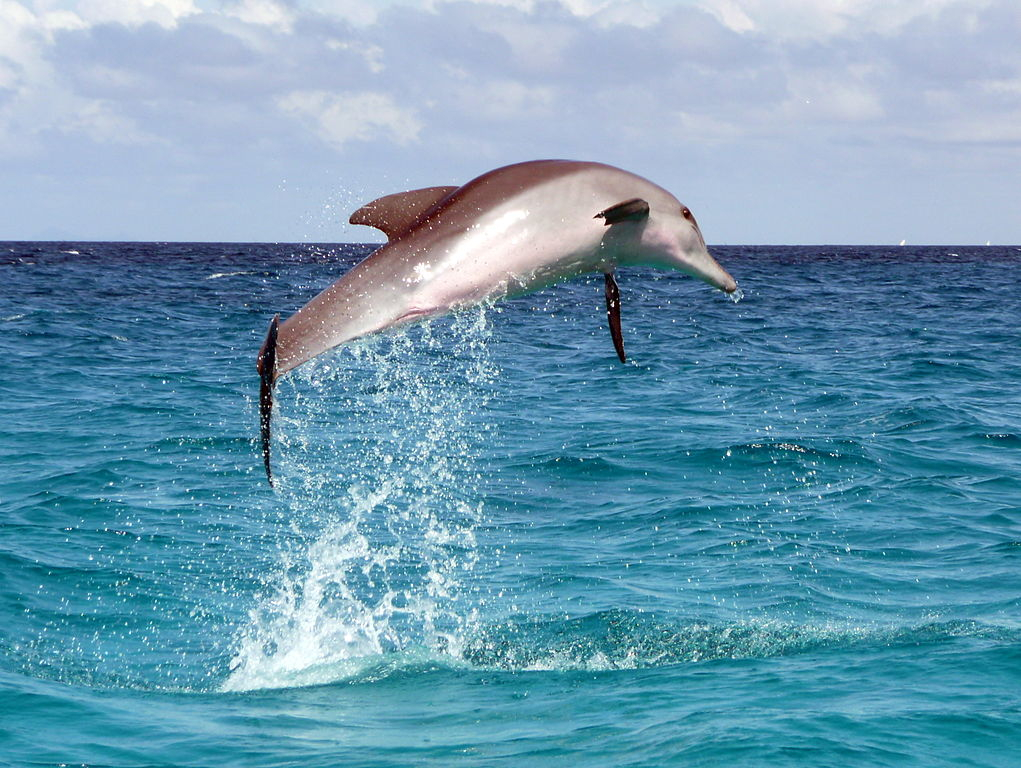 A juvenile Pantropical spotted dolphin leaps out of the water in the Indian Ocean, off the coast of Zanzibar, Tanzania. Author:Sbork / CC BY-SA/3.0
Previous story

Dolphin numbers in the Indian Ocean may have dropped by more than 80% in recent decades, with an estimated 4m small cetaceans caught as “by-catch” in commercial tuna fishing nets since 1950, according to a study.

The study, led by Dr Charles Anderson of the Manta Marine organisation in the Maldives, estimated dolphin numbers had likely dropped to only 13% of their levels before 1980, when large-scale fishing efforts for tuna in the Indian Ocean began.

Dr Puti Liza Mustika, a co-author of the study from James Cook University’s College of Business, Law and Governance, told Guardian Australia that most of the dolphins caught accidentally in gill nets did not get reported and were likely discarded over the side of boats.

About a third of the tuna pulled from the Indian Ocean is caught in gill nets that hang in the water column – a method that has long concerned conservationists because as well as catching the valuable tuna, they also entangle other species including dolphins, whales, sharks and turtles.

In the study, the authors acknowledge the estimates of the impacts on dolphins are “not definitive” and are “subject to much uncertainty”. There was no attempt to differentiate the different dolphin species impacted.

But the authors added: “Nevertheless, they do highlight the potential impact of Indian Ocean gill-net fisheries on regional cetacean populations, and the need for much improved monitoring, mitigation and management.”

Mustika said some reliable data was available from observers on boats and from previous studies. While the study looked at all cetaceans – dolphins, porpoises and whales – the vast majority being caught were dolphins.

More than 80% of Indian Ocean dolphins may have been killed by commercial fishing, study finds

“That by-catch number is alarming, but there are a lot of uncertainties because the datasets are insufficient,” Mustika said.

Results taken from 10 programs to reliably count by-catch between 1981 and 2016 – carried out in Australia, Sri Lanka, India and Pakistan – were used as the basis to extrapolate how many cetaceans were caught across all Indian Ocean fisheries covering 24 countries.

Iran, Indonesia, India, Sri Lanka and Pakistan were five countries catching the most tuna using gill nets. Together with Oman, Yemen, UAE and Tanzania, those nine countries accounted for almost all the dolphin by-catch.

Iran and Indonesia did not report by-catch, Mustika said, while the limited figures that were available from other countries were likely unreliable.

About 4.1 million small cetaceans had been caught between 1950 and 2018 in Indian Ocean gill nets.

The study said Iran’s average annual catch of 214,262 tonnes of tuna – the greatest haul across the Indian Ocean gill-net fisheries – was likely catching 30,302 cetaceans a year.

The study found that for every 1,000 tonnes of tuna currently being caught, about 175 cetaceans were also being caught.

Mustika said the vast majority of those animals would die. “It’s a painful death. Dolphins are clever, but because the net is very thin in the water, the dolphins’ sonar misses them.”

She said the fishers should not be seen as “dolphin killers” and those she had spoken with were unhappy when dolphins became caught in their nets.

The study said the by-catch estimates could also be too low. “These estimates do not include cetaceans that were caught by gill net but discarded at sea, used as bait and not landed, escaped from capture but subsequently died, or suffered significant sub-lethal impacts, caught in ghost nets or landed but not recorded.”

Mustika said solutions to the problem could include working with fishers to switch from the gill nets to other fishing gear, such as pole and line.

There had also been trials using devices attached to the nets that deterred dolphins, including lights or devices that caused a rattling sound. Setting nets at shallower depths reduced the by-ctach but also reduced the amount of tuna being caught.

“The solution has to be technology, as well as using fishing gears that are more sustainable,” Mustika said. “But banning these fishers is not a solution for developing countries.”

She said it was important to understand there was a “political reality” in the Indian Ocean, where hundreds of thousands of relatively poor fishermen and their families relied on the gill nets.