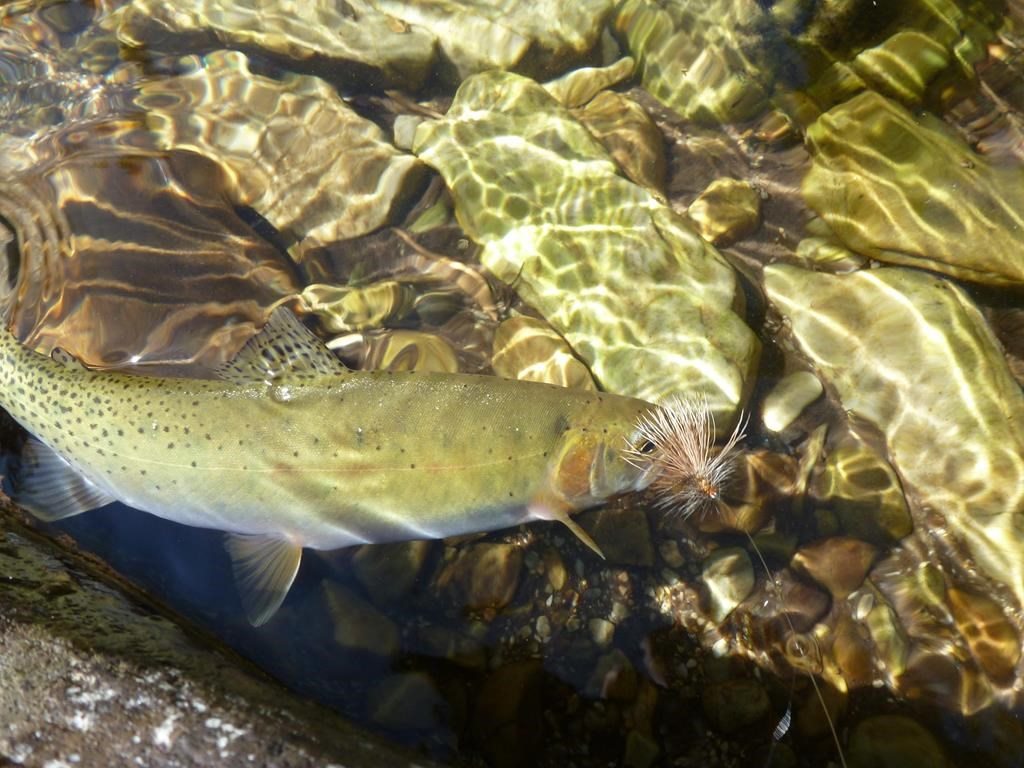 A Westslope cutthroat trout swims next to a lure in Idaho's North Fork of the Clearwater River on July 19, 2013. File photo by The Associated Press/The Idaho Statesman, Pete Zimowsky
Previous story
Next story

Teck Resources says it's baffled over the virtual disappearance of a rare fish from a lengthy stretch of a long-contaminated river downstream from the company's coal-mining operations in southeastern British Columbia.

A recent survey of cutthroat trout, a species of special concern, in the Fording River immediately downstream from the mines found numbers of the prized game fish have unexpectedly collapsed. Stretches of river that teemed with hundreds of adults and juveniles were empty of fish two years later.

Survey teams working for the company in 2017 estimated 76 adult fish per kilometre in the 60-kilometre stretch of river from Teck's four mines to the town of Elkford, B.C. By late 2019, the estimate was nine.

Contamination from Teck's mines into the rivers of the Elk River watershed are a long-standing problem. Coal mining releases selenium, an element which in large amounts is toxic to wildlife and humans.

Reports on selenium concentrations in area waterways have levels at the maximum or above B.C.'s drinking water guidelines. Two are four times higher.

Elk River water monitoring stations near the mines have reported levels 50 times what's recommended for aquatic health. Near the city of Fernie, B.C., readings have in the past reached 10 times that.

Brown said Teck plans to spend more than $1 billion by 2024 to clean up its effluent. A malfunctioning water treatment plant has been repaired and two new plants are to be operating by the end of the year, he said.

"Once we reach that point, we expect to see some really significant reductions in selenium downstream," Brown said. "We are behind on implementation because of the challenges we faced with the first facility."

Selenium isn't the only problem. Mining effluent causes calcification in which the loose, pebbly stream bottoms trout need to lay eggs harden over.

Neither issue is new and Brown said nothing changed in the last couple of years to account for the near-disappearance of one of the few remaining genetically pure stocks of one of Western Canada's iconic species.

"We don't know if it involves water-quality issues related to mines or if it's natural causes, predation, climate change ... That's the work we need to do to fully understand what of those factors is playing a role."

The collapse was, however, predicted.

"The upper Fording River population of westslope cutthroat trout is in a critical downward spiral," wrote an Environment Canada expert in 2014.

"Further increases in waterborne and fish tissue concentrations (of selenium) can only lead to one outcome ... total population collapse."

The B.C. government said it's aware of and concerned about the fish. Monitoring programs with Teck and the Ktunaxa First Nation are being set up, said Environment Department spokesman David Karn.

"(The province) is working with other provincial and federal agencies to review and oversee the short-term mitigation actions and determination of cause, as well as proposed fish population studies in 2020," he said.

Teck now reports every two weeks to the provinces on work by third-party investigators, said Karn.

This report by The Canadian Press was first published March 8, 2020

WHAT IS "BAFFLING" ABOUT FISH DISAPPEARING FROM A "LONG-CONTAMINATED" RIVER?

Is this The Beaverton? The Onion?

It's a sign of the times that you can't tell real news from satire.