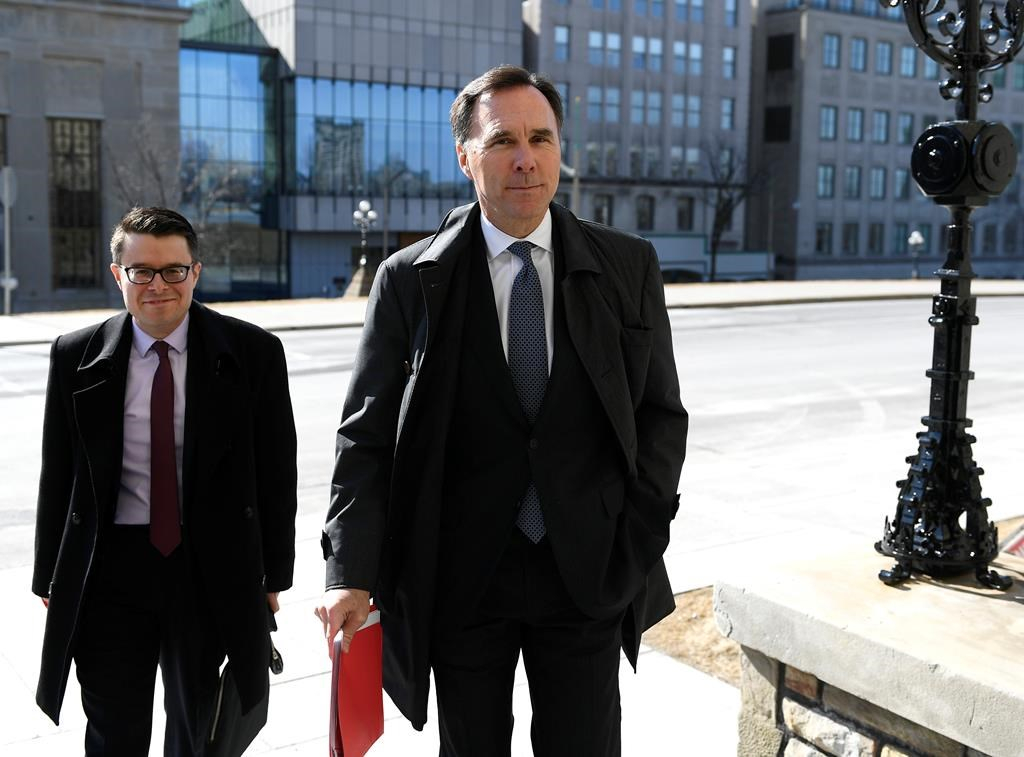 Minister of Finance Bill Morneau arrives for a press conference on economic support for Canadians impacted by COVID-19, at West Block on Parliament Hill in Ottawa, on Wednesday, March 18, 2020. File photo by The Canadian Press/Justin Tang
Previous story
Next story

A growing number of business and labour groups are urging the federal Liberals to up their promised wage subsidy to help companies hit hard by COVID-19 keep people on their payrolls.

The latest salvo came from the United Steelworkers union on Tuesday morning, around the same time the Canadian Federation of Independent Business panned the promise for not going far enough to save jobs.

There are calls for Ottawa to increase the subsidy to 75 per cent from the Canadian Federation of Independent Business, the federal New Democrats and Greens. The Steelworkers want it increased to 80 per cent as is being done in the U.K., which has also set a monthly cap of almost $4,000.

The Business Council of Canada and Canadian Chamber of Commerce have issued similar requests for more wage help.

Dan Kelly, president of the Canadian Federation of Independent Business, said the belief across all those groups is that helping employers retain workers, instead of paying the money through employment insurance or other similar benefits, will help the country get back into recovery mode quickly.

The Liberals have said their economic stimulus plan, which includes $27 billion in spending and $55 billion in tax deferrals, is only a start.

Canada, as part of a joint declaration Tuesday from G7 finance ministers and central bankers, agreed to do "whatever is necessary" to protect jobs and businesses, and urged other countries to follow suit as long as required.

All the measures announced to date, coupled with the economic situation, likely puts the starting federal deficit for the coming fiscal year around $86 billion, up from the estimated $28.1 billion late last year, according to a Royal Bank report this week.

It's possible that the Liberals will up the wage subsidy as in other countries, but likely not soon enough to stave off heavy job losses, said Kelly.

"Hearing everything is on the table, but not having any more meat on the table is wearing thin with the business community that is absolutely freaking out," he said.

The job losses from the shock could be significant. The Conference Board of Canada estimated in a report Monday the economy could shed more than 330,000 jobs over the next two quarters.

Wage subsidies may be the fastest way to ensure that income continues to flow to households to cover essential costs and maintain their connection to the workforce, said Jennifer Robson, an associate professor of political management at Carleton University in Ottawa.

Some businesses like big grocery stores won't need the help, she said, but a subsidy might help others facing cash-flow and operational constraints — by being ordered to close, for instance — "hang on to more workers, even if at reduced pay relative to pre-crisis levels."

Sheila Block, a senior economist with the Canadian Centre for Policy Alternatives, said it may be more effective to deliver direct benefits to workers and use existing programs like employment insurance that act as automatic financial stabilizers instead of creating a new program.

Wage subsidies can help in traditional downturns, she said, but this isn't one.

Businesses have been ordered to close and workers to stay home as policy-makers try to limit the spread of COVID-19, which has already thrown a wrench in supply chains and created uncertainty in financial markets over the depth and duration of the economic shock.

"It's about helping businesses survive during this downturn ... and it's not clear to me that the wage subsidy is the right approach when we're saying send your workers home," Block said.