Ford's handling of the pandemic drawing praise from friends and foes 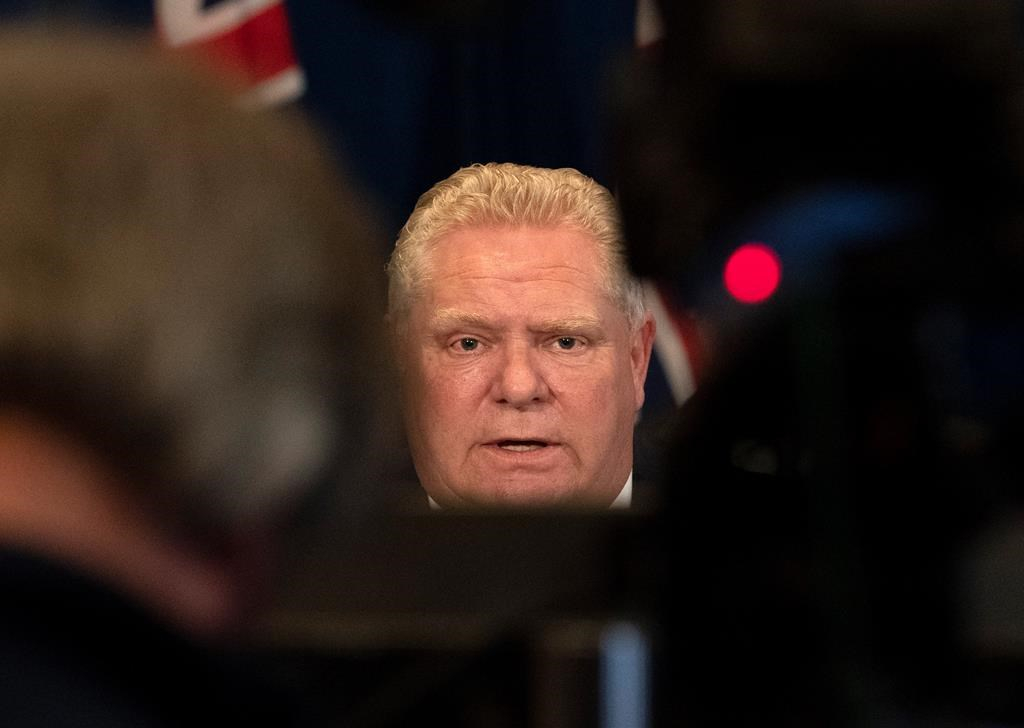 No aspect of Canadian life has been left untouched by the COVID-19 pandemic, including politics, and pundits agree the premier of Ontario is one of those most transformed by the outbreak.

Doug Ford, a divisive player on the regional stage long before becoming an equally polarizing national figure, has been turning heads since it became clear that Canada would not be spared the spread of the novel coronavirus. But many of those heads, once likely to be thrown back in dismay, are now bestowing nods of approval.

Gone is the pugnacious partisanship and populist rhetoric that opponents once used to compare Ford to U.S. President Donald Trump. The premier's regular briefings have instead drawn widespread plaudits for their calm, collegial tone as well as their comparatively progressive content.

Such an approach, political observers say, differs not only from that demonstrated by like-minded politicians south of the border but from his own past conduct.

"I'm a Liberal, but I'll give Doug Ford a lot of credit — he's handling this really well," said Dan Moulton, vice-president at Crestview Strategy and former senior staff member in the previous Liberal government. "He's being transparent, responsive, engaging. Ontarians are really seeing him in action."

Praise from the centre or left of the spectrum has been rare through Ford's unorthodox and colourful political career.

During his time as Toronto city councillor, Ford drew heavily on his experience running the family label-making business and his well-honed populist instincts to carve out a reputation for staunch conservatism and straight talk.

Those traits remained on full display when he became premier in June 2018 and throughout a tumultuous first year in office that saw his Progressive Conservative government reverse course on a host of core policies and promises.

He arbitrarily slashed the size of Toronto city council half-way through a municipal election campaign, then threatened to invoke the rarely used notwithstanding clause to overturn a court decision that found his actions unconstitutional. The case will now be heard by the Supreme Court of Canada.

He led a coalition of provincial premiers who took the federal government to court over its carbon tax and rarely missed an opportunity to level partisan broadsides at real or perceived political foes.

All that changed earlier this month, and Ford's near-daily public appearances during the COVID-19 crisis have been free from political attacks.

In an interview with The Canadian Press, Ford said unprecedented times called for a fresh approach.

"We put differences aside and we moved together because people expect that," Ford said of his current, friendly relationship with federal and municipal officials.

Ford's reference to the will of the people is more familiar to political analysts, as is the clear communication style that's characterized most of his speeches since the pandemic took hold and prompted him to be among the first provincial leaders to declare a state of emergency.

Political communications consultant Tim Abray said clear messaging has long been one of Ford's political strengths, noting that aspect of his performance to date has not come as a surprise.

More striking, he said, has been Ford's willingness to give equal prominence to credible scientists and public health officials, ensuring reliable information is readily available in one of the provinces hardest hit by the outbreak.

Moulton agreed, crediting Ford for showcasing some of his strongest cabinet performers during a slew of multibillion-dollar spending announcements made to safeguard the province during the pandemic.

Some trademark measures remain, such as significant corporate tax breaks, and Ford's populist appeal was on full display during a recent, impassioned rant against a high-end store selling disinfectant wipes for $30.

But the new announcements have also included measures that depart radically from his government's usual agenda, such as boosting income for some poor residents and jettisoning the party's oft-stated goal of balancing the province's books.

The approach has not gone unnoticed, even drawing praise from traditional political adversaries well outside of Ontario.

"While I can’t say I have historically been a fan of (at)fordnation, I have to say he is doing an incredible job on the COVID-19 file," wrote B.C. Green party Leader Andrew Weaver on Twitter. "He has shown strong, decisive and compassionate leadership at a critical moment in Ontario's history."

Such praise marks a reversal for Ford, whose popularity had plummeted to new lows in the months preceding the outbreak.

"The main thing that has been driving the animosity around this government is an apparent lack, during normal times, of the ability to listen to non-aligned voices," Abray said, noting Ford has previously demonstrated an ability to adjust his position in the face of new information. "What I think he's done is he's stepped up and is behaving more like Doug Ford the person rather than Doug Ford the partisan Tory."

Ford, for his part, said the experience of steering Ontario through the pandemic has produced lessons that will be applied once the crisis passes.

"There are so many things that we can agree on," he said "There's so much opportunity for governments to get a lot more done if we all work together."

Yes it is true. He's doing a

Yes it is true. He's doing a good job and Canadians who oppose him politically are getting behind him because that is what it takes in this time. I see the same thing happening across the country. We should be celebrating also those who sit in opposition, and hold their powder dry, for another time and another day. They too are serving and serving well.

He allows unnecessary construction to continue putting workers and all of us at risk because he has friends in the industry. He does fake anger at Pusateris for price gouging but lets companies like pawnbrokers and loan companies prey on the vulnerable. He is a hypocrite trying to save his electoral ass by towing the line for now. Sorry if I am not impressed.

I didn't vote for this man

I didn't vote for this man because of his politics. I disliked him very much. That said I have nothing but praise for the way he and this Ontario government has handled the situation we all find ourselves in. I am seeing first hand how this government is listening to the people who are on the front line of this. Our local MPP office is in touch with my partner on a daily basis. She is heading up the pandemic mission in my area and is getting help, cooperation and a concerned, listening ear from this MPP. Thank you Mr. Ford and the Ontario Government for getting on top of this and being the antithesis of the American Conservatives.

Yet another CP puff piece.

Yet another CP puff piece. This stuff is bad enough on its own, but compared to the excellent critical work done by your own reporters, it's just laughably propagandistic. What's the deal? What's in it for National Observer to run this awful writing.
Ford's list of Essential Services is criminally irresponsible and one of the main factors, I daresay, why Ontario's trajectory looks a lot more like Italy's than South Korea's. Get one of your bright reporters to investigate that. I guarantee you'll hit it out of the park with that story.

And what's Doug's (and

And what's Doug's (and Christine's) response to the WHO's one imperative... "Test, test, test!? They certainly aren't doing a good job of that. PPE for hospital workers? Fail! Ventilators? Fail! Good job? No. When this catastrophe is done and all the horrific tallies of infection rates, mortality rates, slopes of exponential curves are in we can talk about what a hero our great leader was. I predict that the best anyone will be able to say will be "at least it wasn't as bad as in the USA." Take a look at various countries' trajectories https://ourworldindata.org/grapher/covid-confirmed-cases-since-100th-cas... our world in data for org. Not a pretty picture.

Add to that that our total

Add to that that our total caseloads are completely suppressed by the testing criteria, which require people to be having difficulty breathing, to have a fever, to have recently travelled outside the country or been in close contact with someone who has done so ...
The wait time for a callback from TeleHealth (who you're supposed to call if you think you have COVID-19 and are having difficulty breathing) takes 4 days to get a callback.
If that's a good job, it beggars the imagination to think what a bad one might look like.

For once he isn’t acting like a Trump clone. Kudos to him, he deserves them this time.

In 60 years of listening to

In 60 years of listening to the words of political leaders, I've yet to have come across anyone but Ford and Kenney, of whom people would have such a low level of expectation that it'd be deemed kudo-worthy to not act like a 4 year-old playing revivalist preacher.
If that's the standard we expect, maybe we deserve what we've got.
Not many people couldn't do better.

Say *What*????
No, my dears, he's not done a good job. He waited for equipment to materialize out of the ethers.
He decries the low test rate, but there's been no change to the testing criteria.
No level of government in Ontario acknowledges in its policy what is now widely known fact: that fever is no definator of infection, and that virtually everyone who has the illness and develops fever has been contagious, and infecting other people, for a minimum of two days, and up to 20.
He's still putting his beloved "little guys" in "working families" at risk by having construction workers and miners toiling at close quarters, and then going home to their families.
BC has, in fact, done a much better job, where the Chief Medical Officer of Public Health has been providing BC residents with facts; meanwhile, our own provincial officer has taken a backseat to the politicos, remains mum, and gives the impression that he sees nothing further to be done.