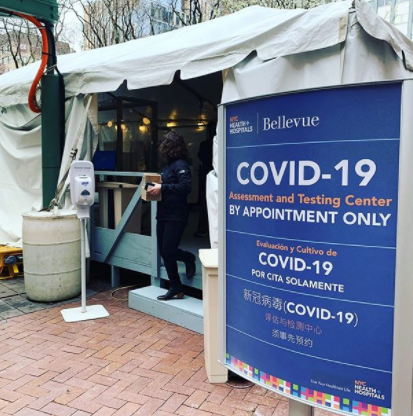 The Empire State Building lit up Monday night with revolving red and white lights resembling the flashing lights of an ambulance. The iconic building, which is visible from my own neighborhood across the bridge, has often symbolized New York City. And it does again. But this time it symbolizes the crisis taking place in the city at the epicenter of the coronavirus pandemic, not just in America, but in the world.

With more than 41,700 confirmed cases of COVID-19 — including 1,096 deaths — as of Tuesday morning, New York City now accounts for more than one in five COVID-19 cases nationwide, and five percent of all cases globally.

New York City, is indeed, a city with a flashing emergency light.

The @EmpireStateBldg reminding us that the city is in the middle of an emergency. pic.twitter.com/50TjEjOogN

Yet as even as the city is forced to set up makeshift morgues and refrigerated trucks to handle the sheer number of dead bodies, some right-wing media figures and pro-Trump conspiracy theorists still aren’t convinced that the crisis is real — or are claiming if it is real it’s being exaggerated by the media in an effort to hurt Trump.

The latest iteration of this disturbing trend took off on social media over the weekend when former Fox News commentator Todd Starnes posted a video on Twitter showing a seemingly quiet scene outside Brookdale Hospital in Brooklyn, NY, which was described last week as a “war zone” by a doctor who works there.

Starnes told viewers that he wanted to expose what was really going on, suggesting that news reports conveying the accounts of healthcare workers have overstated the severity of the crisis.

“You’re hearing one thing on the mainstream media​, and this is what it’s like in reality,” Starnes said in the video, describing the hospital as “very quiet [and] very calm.” And in the video he posted, the scene was relatively quiet. The thing is, the action isn’t taking place in the parking lots where he filmed.

He posted the same video, with a similar message, on Facebook, writing: “The Mainstream Media and Democrats want you to believe our NYC hospitals are war zones. Well — this is my local hospital.”

As hospital workers share horrifying stories from the frontline of the battle against coronavirus, conspiracy theories downplaying the crisis have made their way from the fringes of social media onto Fox News.

In an accompanying column in the conservative publication Townhall, Starnes contradicted widespread reports of overflowing hospitals from doctors, nurses, patients and hospital officials, writing: “I personally visited two hospitals in Brooklyn and did not [see] any unusual traffic. Nor did I see hospitals that were overrun by patients seeking treatment.”

He acknowledged that the scene in New York City could get worse, but concluded that, “at this very moment hospitals have not been turned into war zones…”

And so the conspiracy dye was cast.

The next day, the hashtag #FilmYourHospital trended on Twitter, as ordinary people and right-wing media figures alike took to social media to post videos of empty parking lots and entrances outside of hospitals in New York City and around the country.

“We are being lied to,” one Twitter user claimed about the scene in New York City. “The deep state wants maximum panic.”

At least two former congressional candidates joined in, blaming the media for “causing unneeded panic” and claiming that “we are not being told the truth” and “we can’t trust the news.”

By Sunday night, the conspiracy theory had made its way from the fringes of social media onto Fox News, where contributor Sara Carter — who earlier on Sunday posted a now-deleted tweet promoting the #FilmYourHospital hashtag — suggested to host Steve Hilton that the videos of parking lots and hospital entrances were reason enough to question whether hospital employees are telling us the real story.

The answers to these questions are readily available. The latest data on ICU availability in New York City, which was released Friday, shows that 1,520 COVID-19 patients were receiving care in ICUs. Since then, 2,000 additional people have been admitted to New York City hospitals, with more than 8,500 COVID-19 patients hospitalized as of 5 p.m. Tuesday.

Last Thursday, New York City had a capacity of just over 2,000 ICU beds, of which only 15 per cent remained available. At the time, 850 COVID-19 patients were in the ICU. Capacity has increased since then, with the construction of field hospitals and temporary medical facilities, as well as the arrival of the hospital ship USNS Comfort, but widespread shortages are expected and hospitals are already talking about rationing life-saving medical equipment.

"Today was the worst day anyone has ever seen, but tomorrow will be worse," Meredith Case, an internal medicine resident at Columbia/New York-Presbyterian Hospital, wrote in a March 25 Twitter thread. "We are on the precipice of rationing. Needless to say, these decisions run counter to everything we stand for and are incredibly painful."

New York is expected to need a minimum of 30,000 ventilators when the pandemic hits its peak in 2-3 weeks. As of last Thursday, there was still a need for 26,000 additional ventilators.

So how can the scene inside the city’s hospitals be so vastly different from the quiet parking lots outside?

For starters, medical centers have canceled elective procedures, switched from in-person visits to telemedicine, and banned visitors from coming inside. In New York City, some hospitals have converted into COVID-19 treatment centers and are sending non-COVID-19 patients to other facilities to avoid the risk of infection. Meanwhile, cities with major outbreaks have shut down and enacted mandatory quarantines to keep residents inside — so a drop in traffic is to be expected.

More to the point, the “war zone” scenes described by doctors and nurses aren’t taking place in parking lots or hospital entrances, but in ICU’s and COVID-19 isolated wards. Not only are these areas restricted due to the risk of infection, but HIPAA laws mean they’re also off-limits to the media and others with a camera.

For that reason, doctors and nurses can’t quite join in on the “#FilmYourHospital” trend, but they have and will continue to provide firsthand accounts of the horrifying conditions they're seeing inside.

And as they do, the Empire State Building will remain lit up to make sure that this moment in history is neither forgotten nor denied.

Somebody has to be the bottom

Somebody has to be the bottom of the IQ scale.

Thanks for the report

Thanks for the report Caroline,
a very disturbing trend by Trump sycophants even though the President has FINALLY acknowledged that the COVID-19 virus is REAL and that it may be possible that tens of thousands will die.
Please listen to the EXPERTS everyone or this mess may take a longer time go away.

I shared this one to the FB

I shared this one to the FB group I manage. I'm amazed at how many reasonable people are posting comments questioning our Chief Medical Officer of Health's directives. Not questioning the reality of the pandemic but still.... What's the point? Even if you don't agree with everything being done in your province, spreading doubt on FB only increases fear and uncertainty.

Well, one thing I am certain

Well, one thing I am certain of is that I'd rather be dead of the COVID than living in a police state with a bunch of cowards.

Well, that also means you

Well, that also means you would be endangering other people's lives by spreading the virus in an "uncowardly" manner. Plus you would be dead. How clever is that?

The Trump Right or Wrong

The Trump Right or Wrong adherents are a strong force in the USA. I truly believe, while it will be very unfortunate, Trump will be re-elected this fall. What he says and does seem to have little effect on Republican voters. I almost wish he would get a severe case of Covid-19 and require a ventilator. Almost but I wouldn’t wish that on anyone. Even our Trump clone Ford is doing far better in Ontario. At least he believes this is a serious problem.

Trump's pale photocopy, Ford a short time ago deemed LCBOs and alcohol retail an"essential service". And- wow- kept the booze flowing going while Covid kept flowing faster.
Yes- now Ford gets it, but I don't think this qualifies him as "doing far better in Ontario"...

Your report is unbalanced.

Your report is unbalanced. March 31 CBS admitted that they used footage of a crowded Italian hospital ward in a piece about New York hospitals. This omission is egregious when we are discussing the credibility of mainstream media.

Mr. Smith, the virus is real.

Mr. Smith, the virus is real. Its devastation is real. Promoting disinformation in times like this is irresponsible. Your comment is right out of the conspiracy theory playbook: find one example of a slip up by a generally credible source to invalidate all sources, while ignoring the drivel pandered by crackpots. And oh by the way, the moon landing happened.

"And so the conspiracy dye

"And so the conspiracy dye was cast. "

I like the imagery, Caroline, throwing dye around., but that's not a correct use of the idiom. It's "die." Two dice, one die. The die has been cast, and there's no going back.