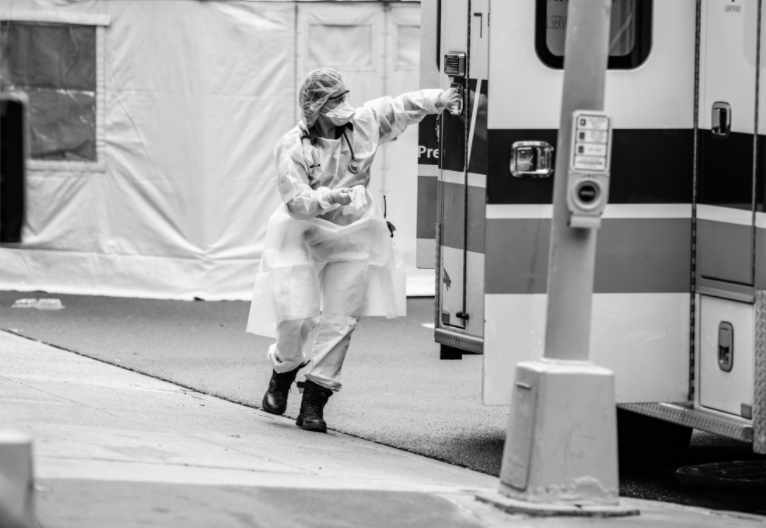 An employee at New York Presbyterian Hospital disinfects an ambulance amidst a surge of COVID patients at the city's hospitals. Photo: Patrick McLeod/Twitter
Previous story
Next story

The body trucks arrived last week. If you didn’t know what you were looking at, you might not have taken a second glance at the unmarked white trailers parked outside some of New York City’s largest medical centers.

But in the city that has become the epicenter of the coronavirus pandemic in America, the non-descript trucks are just one more reminder of the grisly reality we are all facing. As bad as it is right now, the situation is expected to worsen over the next few weeks, as hospitals hit their capacity and cases continue to rise.

Over the weekend, morbid videos emerged showing hospital employees in full protective gear, loading bodies into the refrigerated trucks. In one viral video, a bystander can be heard breaking down as he filmed the scene outside Brooklyn Hospital, where a forklift was being used to move what appears to be bodies from the hospital to the truck parked outside.

“Please pray for us,” the man pleaded.

On Saturday, an average of one person died every nine minutes in New York City. On Sunday alone, 98 people died within a span of just seven hours. As of Monday morning, New York City had more than 36,200 confirmed cases of COVID-19, including nearly 800 deaths.

The entire city only has enough capacity for 900 bodies to be stored, so officials asked the Federal Emergency Management Agency (FEMA) for help setting up makeshift morgues.

The city has reportedly purchased 45 refrigerated truck trailers, each capable of storing up to 44 bodies. Those, combined with tents set up as makeshift morgues, will give the city capacity to hold up to 3,600 bodies.

The last time New York City faced a mass casualty event of this scale was on September 11, 2001.

Dr. Steve Kasspidis, of Mount Sinai Queens hospital in Astoria, Queens, described the situation as “biblical” and said it feels like being in “hell.”

New York City Mayor Bill de Blasio has warned that half the city’s 8.6 million residents should expect to get #COVID19 before the deadly pandemic comes to an end.

“People come in, they get intubated, they die, the cycle repeats,” he told Global News. “The system is overwhelmed all over the place.”

“9/11 was nothing compared to this,” he added. “We were open waiting for patients to come who never came, OK? Now they just keep coming.”

Calls to the city’s 911 medical services have reached more than 6,500 per day — the highest volume on record, surpassing even 9/11.

Medical professionals aren’t the only ones bearing the brunt of the deadly pandemic. More than 500 members of the NYPD have tested positive for COVID-19, and three have died. On Sunday, nearly 5,000 of the department’s nearly 24,000 officers called out sick, leaving the police department operating without 14 per cent of its workforce.

Police Commissioner Dermot Shea said Sunday that he expected the number of confirmed cases of COVID-19 among NYPD officers to surpass 900 on Monday.

With an estimated 28,000 residents per square mile, New York City is by far the most densely populated city in the United States. Mayor Bill de Blasio said last week that half the city’s 8.6 million residents should expect to get COVID-19 before the pandemic comes to an end.

The peak of the pandemic is projected to hit New York City within a matter of weeks, according to Gov. Andrew Cuomo, but even with thousands of additional beds at field hospitals and emergency shipments of medical supplies, the sheer volume of severely ill patients is expected to far exceed capacity at the city’s hospitals.

At hospitals across the city, doctors are preparing to confront a grim new reality, as many will likely soon be forced to make decisions about rationing life-saving medical equipment.

“The deluge is here. Our ICU is completely full with intubated COVID patients. We are rapidly moving to expand capacity. We are nearly out of PPE. I anticipate we will begin rationing today,” Meredith Case, an internal medicine resident at Columbia/New York-Presbyterian Hospital, wrote in a March 25 Twitter thread.

Case said hospitals are having trouble discharging stable COVID patients because they are being refused by nursing homes and other long-term care facilities — a problem that is greatly exacerbating existing shortages.

“The only beds we’ve been able to free up are people who have died,” said one doctor at Elmhurst Hospital in Queens.

The tragedy that is unfolding here is compounded by the nature of the virus. Because of the high risk of infection, family members are prohibited from visiting their loved ones in the hospital, so most COVID-19 patients are dying alone. In some hospitals, even non-COVID-19 patients are affected by the restrictions.

“Imagine being hospitalized alone. Imagine dying alone. This is the reality for more than just #COVID19 patients as hospitals ban visitors for everyone,” Stanford physician Roxana Daneshjou wrote on Twitter last week.

Dr. Chinazo Cunningham, a faculty member at Albert Einstein School of Medicine and internist at Montefiore Medical Center in the Bronx, said on Twitter that the current crisis is the worst she’s seen in more than 25 years of practicing medicine.

“COVID19 is decimating our health care system. PPE is so scarce. Physicians are scared. Patients are scared and dying alone. We have so little to offer,” she wrote.

Funeral services are also affected, with restrictions placed on who can attend private ceremonies and burials. In most cases, only immediate family members are allowed to attend funeral services, and gatherings are limited to 10 or fewer people. Some funeral homes are even requiring attendees to stay in their cars.

For the nation’s largest city, it already has.

Everyone knows someone who is sick. Most of us know someone who has died. And all of us are just trying not to be next.