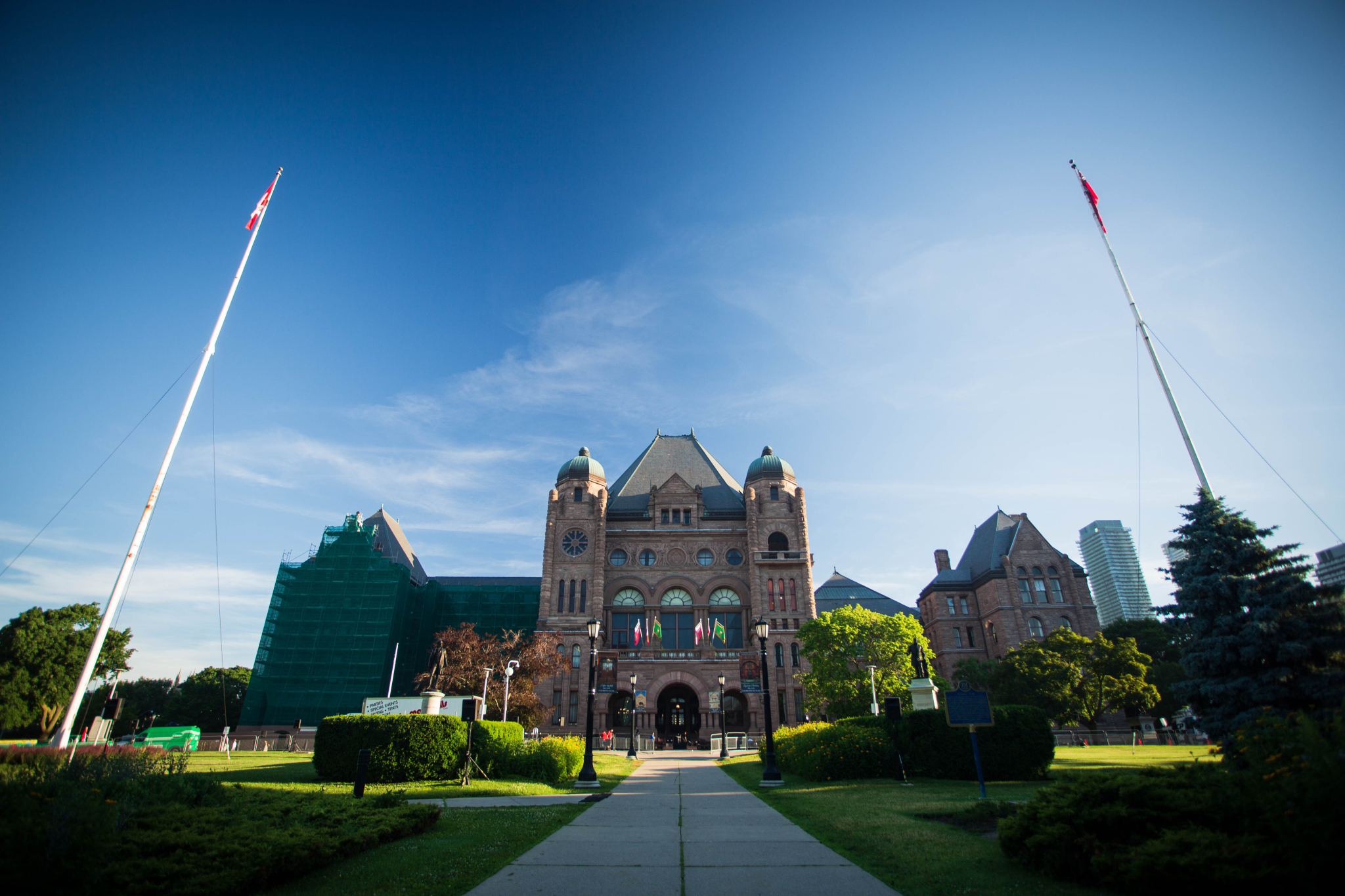 Queen's Park, the building that houses the Ontario Legislative Assembly, in June 2018. Last week the Ontario government rolled back environmental protections, saying they rules would hamper its response to COVID-19. File photo by Alex Tétreault
Previous story
Next story

The Ontario government has suspended key environmental protection oversight rules, saying they could hinder its response to the COVID-19 pandemic.

The change allows the Progressive Conservative government to push forward projects or laws that could significantly impact the environment, without consulting or notifying the public. Critics say they fear the relaxed rules could be used to skirt environmental oversight for projects unrelated to COVID-19.

Under the new regulation, government ministries do not have to consult the public or consider environmental values as they make decisions. The regulation doesn’t specify that those decisions must be related to COVID-19.

“At this point I will give the benefit of the doubt to the government … but we will be watching very closely,” said Ontario NDP environment critic Ian Arthur.

“The danger of this could be if it was done for political reasons.”

A spokesperson for Ontario Environment Minister Jeff Yurek, Andrew Buttigieg, said the government still believes environmental protection is a “vital consideration.” Officials will continue to consult with and notify the public about non-urgent projects, he added.

“This will ensure our government is able to quickly respond to time-sensitive needs that arise as a result of the COVID 19 pandemic,” Buttigieg said in an emailed statement.

“These steps are temporary in nature and will only be taken during this unprecedented emergency period.”

The new rules don't specify what kind of coronavirus-related project could be accelerated by dropping the need for public consultation. When asked, Buttigieg didn’t specify, saying only that the loosened requirements hadn’t been used yet, and the public will be notified if they are.

“At this point I will give the benefit of the doubt to the government… but we will be watching very closely,” said Ontario NDP environment critic Ian Arthur. #onpoli

The temporary rules suspend a key section of the Environmental Bill of Rights, a piece of legislation that gives the public the power to have a say in environment-related decision-making, and hold the government accountable for what it does or fails to do.

The regulation also exempts the government from publicly posting what it’s doing to Ontario’s Environmental Registry, an online tool that allows the public to comment on environment-related moves, though Buttigieg said that the government will continue to post bulletins about its actions there.

The broad exemption is an unnecessary overreach, said Robert Wright, a staff lawyer at the non-profit Ecojustice and former vice-chair of Ontario’s Environmental Review Tribunal. Instead, the government could have written the regulation to allow one-off exceptions to the rules, he added.

Green Party of Ontario Leader Mike Schreiner said he doesn’t believe the government is up to anything nefarious, but he wants the government to assure the public that no major projects will be pushed through during the COVID-19 emergency. “We do need to be vigilant,” he said.

'There is a pattern here that I’m concerned about’

The Doug Ford government has a history of gutting environmental laws. In the nearly two years since the premier took office, Ontario has cancelled 227 clean energy projects, wound down conservation programs, weakened endangered species protections and took away powers from the province’s environmental commissioner, who is meant to hold the government accountable.

There’s no evidence that this move is part of the same agenda, Arthur said, but it’s a “legitimate fear.”

Former Ontario environmental commissioner Dianne Saxe said no one objects to the government using all of its power to act quickly in the face of the pandemic. But the government has already demonstrated its willingness to drop environmental measures without consultation, as it did when Ford cancelled Ontario’s cap-and-trade program without notice, she added.

“There is a pattern here that I’m concerned about,” she said.

“I recognize that right now everybody I know in the public service is going flat out, doing the best they can. It’s hard to know if this is simply an error from rushing, or a reflection of the attitude of the government.”​​​​​​

Alberta made a similar move last week, temporarily loosening its rules so that companies don’t have to report environmental data to the province during the pandemic. And the U.S. Environmental Protection Agency has paused enforcement of pollution laws on orders from the Trump administration.

If anything, Saxe said, governments should be increasing environmental protections during the pandemic. There’s evidence that air pollution is linked to higher death rates from COVID-19, a respiratory virus. And the climate crisis remains a looming problem, one that will hamper our ability to cope with all kinds of situations, she added.

“Yes, we have a current emergency,” Saxe said.

“But we can’t allow it to blind us to the much larger problem that is underway.”

Wake up Canada! No government

Wake up Canada! No government has a legitimate mandate to push ahead with any long term infrastructure, spending or regulatory agenda until this COVID19 nonsense is resolved and the full functionality of our representative government has been restored.

Our legislatures are not sitting, our courts are barely functioning. Only the executive branch of government (police and military) is in full operation. This is the definition of a police state.

Thank you for this article. This action by Ontario (and Alberta also) is very worrisome. It's an example of what Naomi Klein discusses in The Shock Doctrine. Shame on Doug Ford and his government!

Good reporting. Thank you. The first instinct of Conservatives is to loot the environment. Jason Kenny, Ford's Conservative counterpart in Alberta, has done the same, suspending environmental oversight of the oil industry. What non-Conservative provinces have felt the need to give themselves an environmental hall pass? This shows us again how Conservatives cannot be trusted to show stewardship toward our future. Their whole thrust is to increase immediate private wealth at the expense of public values and the wellbeing of citizens of the future.

On yes, - the pattern is very

On yes, - the pattern is very clear. It has been tthe Ford government's dearest wish to suspend/de-fang,expunge, all environemtnal barriers to the holy grail of makimore money for the wealthy by stripping Ontario of its natural resourses and destorying environments that do not sufficiently contribute to the provincial coffers/monied classes.. Useless Green Belts, green spaces, parks, reserves, wetlands, rare biologically diverse tracts must all be sacrificed for energy gobbling suburbs, smoke belching, toxic spewing industries. Open for business indeed! Closed for pandemic prevention, of a disease that arises because humanty is destroying and invading natural lands and evicting the disease carrying inhabitants.

Covid19 is a symptom of our relentless drive to extinguish everything remotely edible from the planet. Erasing generations of hard won protections for precious, non-renewable, biological diversity, climate moderating forests, life giving uncontaminated waters, is, no matter how you parse it, a criminal act against life on earth.