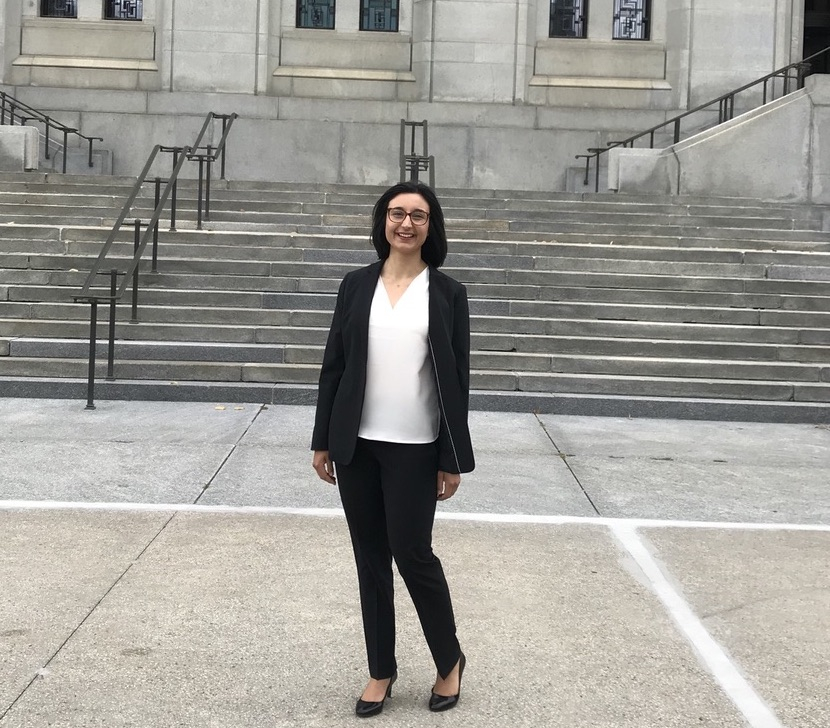 First year law student Michelle Folinas is still hoping to find a summer job related to her studies, and doesn't see how the expanded summer jobs program will help her. Photo supplied by Michelle Folinas
Previous story
Next story

The federal government expanded the reach of its summer jobs program Wednesday in response to the COVID-19 pandemic's blistering attack on the job prospects of students and other young people.

Just what that will mean for students scrambling for summer work is still unclear.

"The messaging students are receiving is confusing. On one hand, it's 'Don't go outside, it's a pandemic!'. On the other, it's 'The CSJ will be employing programs for students to go out and work'," Michelle Folinas, a first-year law student at the University of Ottawa, told National Observer.

What is clear is that the changes mean private and public sector employers can join non-profits in getting employees' wages covered up to the minimum hourly rate in their province, compared to the 50 per cent subsidy first rolled out. Employment can also now be offered on a part-time basis and extended through to the end of February 2021.

But critics said the boost may not be enough, and that it is misdirected.

"The intention with job creation is important, but we don't think this is the right measure," said Alex Gold-Apel, a master's candidate at the University of Toronto's Munk School of Global Affairs and Public Policy, who has been leading a push for students to be covered by Ottawa's Canada Emergency Relief Benefit (or CERB).

Almost 26,000 people have signed a petition under the hashtag #Don'tForgetStudents calling on Ottawa to provide all students and recent graduates with direct income support.

The CERB benefit has started paying out $2,000 a month for up to four months to workers who have lost all income due to COVID-19. It is out of reach of most students since largely they were not working when the pandemic forced the closure of large swaths of the economy starting in mid-March.

It is difficult to estimate the economic costs of summer job opportunities lost to COVID-19, since they technically didn't exist yet and for now may be merely delayed or altered rather than cancelled. But we do know the losses already incurred are primarily being carried by students and youth. (Canadian jobs numbers for March released Thursday showed young people were particularly hard hit; almost 400,000 mostly part-time jobs gone for those between 15 and 24, mostly students working in accommodation and food services).

"Students should not have to put themselves at risk in the community in order to get the assistance that everyone else is getting from the government," says @AlexGoldApel, who is pushing for students to receive the same relief as laid-off workers.

Folinas was also skeptical the expanded program could help her. She was in the midst of a summer job hunt when COVID-19 disrupted those efforts. She is still waiting to hear back about some jobs at courthouses, but they are closed for now, and she is not hopeful.

"While I understand this isn't the time to be picky, I'm 24, have spent six years in post-secondary education, and am not really interested in working at a summer day camp," she said, adding not all students would even be able to consider taking the jobs on offer.

"Students who live with older parents or with people who are immunocompromised are now forced to decide between putting people (and themselves) at risk or paying their bills," she said.

Gold-Apel also expressed concern that students might be put into unsafe working situations where they risked being exposed to the novel coronavirus, which has killed almost 400 people across Canada.

"Students should not have to put themselves at risk in the community in order to get the assistance that everyone else is getting from the government," Gold-Apel said, adding the program also excludes mature students over the age of 30. "Assistance should not be tied to employment."

The government hopes the re-imagined federal summer work program can still create some 70,000 jobs for Canadians between the ages of 15 and 30 at a cost of $263 million. More than two million students are enrolled in post-secondary education.

That target is the same as was originally intended, before COVID-19 happened. It's just that now the jobs may be very different.

Ottawa is planning to work with MPs to find employers who could use young workers to help provide essential services. Groups, who may or may not have applied by the February deadline, now have until April 20 to make themselves known to their representative. Approvals for the regular program were due to roll out in May.

Better than no job

She said the allowance for employment to be extended through to February would mean that schools and employers willing to take on their co-op students could draw on the funds to support those efforts beyond the summer, when many hands-on programs are being cancelled or delayed due to social-distancing efforts.

She said it is currently "a huge question mark for a lot of institutions and organizations about what the fall is going to look like.”

She also saw the positive in allowing employers to adapt projects and jobs to support essential services.

“This is great because we can look at where the needs are in the labour market and help fill those needs with students," Krezek said, pointing to the example of distilleries that have switched to the production of hand sanitizer and may need additional help.

She said students unable to secure experience directly related to their fields “could still build their skills through a variety of other opportunities, and frankly, it’s also better than them not having any employment.”

Royal Bank of Canada economist Andrew Agopsowicz said the measures would help fill some of the gap in relief for students, but that its chances of success largely depend on whether businesses are in any position to hire at all.

"If the social-distancing measures to protect public health are still required into the summer, many students may still find it very difficult to find work," he said, adding that expansion of the CERB to cover students "might be the natural next step."

Editor's note: This article was updated at 10:03 a.m. Eastern time to include reference to a petition calling for direct student relief, and at 6:40 p.m. to add details from monthly jobs data and reference to government's April 20 deadline for new applications to the program.

PM Trudeau's strategy for students is a comprehensive strategy- one meant to support students, yes- but also to secure the existence of those businesses now strained to breaking, and to maintain the bones of an economic structure which could be resilient and not in ICU after our situation with Covid. Let us look beyond the obvious; let us understand the compromises that will need to be made to get students through now and simultaneously sustain parts of our economy when this epidemic ends. Students stocking grocery shelves could do so on a midnight shift with minimal human contact; some employers may devise online work usually done otherwise. Students might also be hired to do painting, light repair and other work not usually part of their job routine. Both students and businesses want to work- let's see what some creative tinkering can do.