By Matthew Klippenstein | Opinion | April 14th 2020
#304 of 1611 articles from the Special Report: Coronavirus in Canada 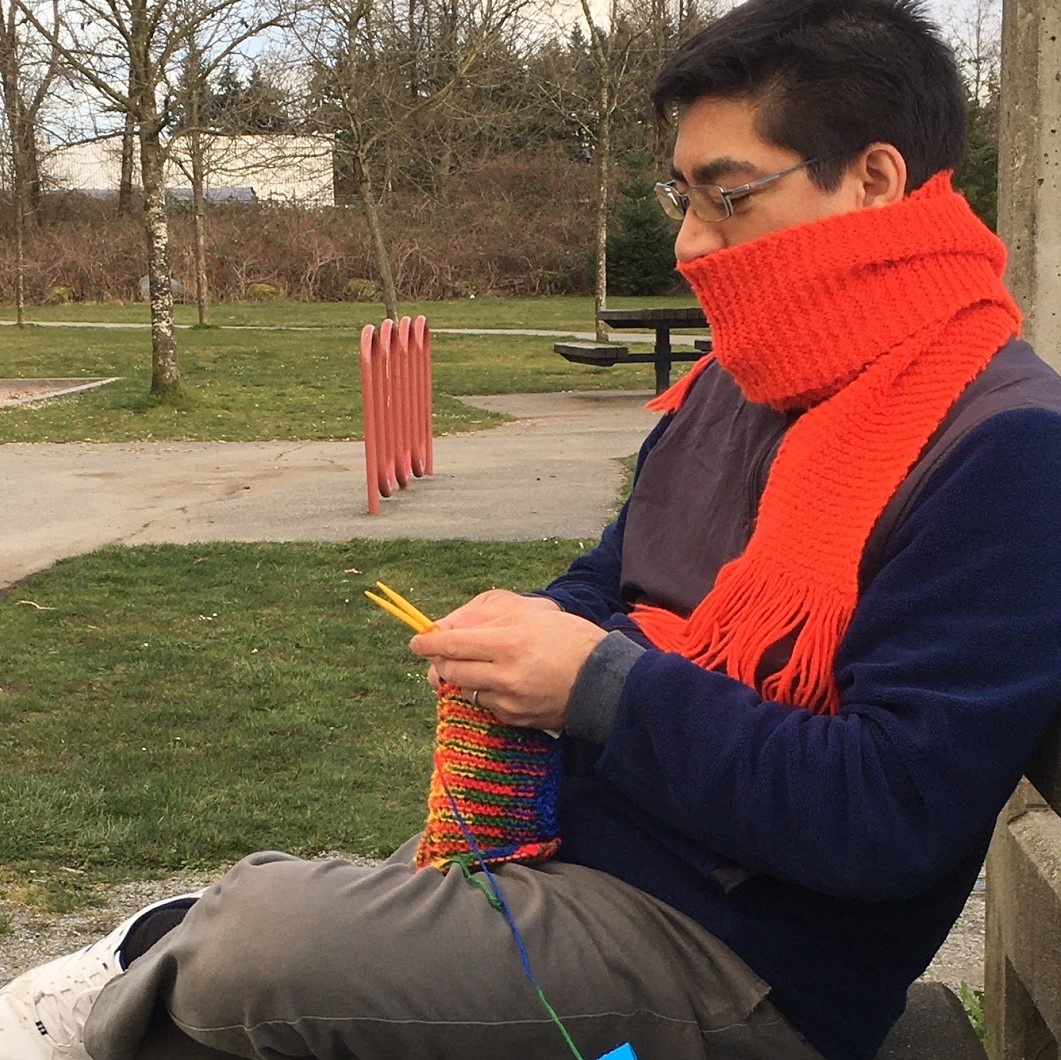 The fashion-wise author sticking to his knitting. Photograph courtesy of Matthew Klippenstein
Previous story
Next story

I found toilet paper and returned home as triumphant as a Cro-Magnon from the mammoth hunt. We’re down to two spare boxes of facial tissues — there are five scattered around our condo — but that’s a lesser concern. We’ve got paper towels; I’ve always considered them the softer option.

Since my prior post, British Prime Minister Boris Johnson tested positive, got hospitalized, was put on a ventilator, recovered, and was released from hospital. It’s as if time is moving in fast-forward, as rushed as the last season of Game of Thrones.

If I can be really selfish for a moment I really, really hope series creator George R.R. Martin stays safe. He’s old and has underlying health conditions, and I really, really, really want to know how the official story ends. To have a pandemic suddenly steal him away before fans get their decades-in-the-making ending would be as cruel as a real-life “Red Wedding” — but gruesomely true to the brutal world he created.

That said, I do hope that everyone — not just family and friends but strangers and foes, and all those I don’t know — stays safe.

(Update: Martin is apparently self-isolating and has outlined the rest of the tale to two trusted writers. They’d better not board the same flight together.)

Pollsters will tell us how public opinion shifts over the course of this pandemic, but statistics are impotent. They need stories to explain how mood went from “W” to “X”, and why.

So before new developments push old memories aside, here are some mental milestones the coronavirus crossed for me in the past several weeks. Maybe they’ll make the pandemic’s progression more vivid and accessible for future Canadians than rising lines of infections and deaths.

Early to mid January: The novel coronavirus appears on my radar. But it’s far away. It’s in China, which might as well be Mars. And lots of people do die from the flu each year.

Still, if the coronavirus is making the news, it must be different enough from the flu to warrant that attention.

Late January: I read that the Chinese government is building several emergency hospitals to deal with patient overflow. So it’s definitely not the flu. Around this time we postpone our spring break travel plans to summer, but for unrelated reasons.

"Here are some mental milestones the coronavirus crossed for me in the past several weeks. Maybe they will make the #COVID-19 progression more vivid and accessible for future Canadians than rising lines of infections and deaths."

I perceive the coronavirus to be real but distant — like retirement. This is the time of year when RRSP advertising floods onto screens, speakers and surviving print media. It’s great that one-third of Canadian households contribute to RRSPs each year, but today’s bills take priority over tomorrow’s savings. (The number rises to two-thirds when TFSAs and pension plans are included.)

The coronavirus remained less of a concern to me than the fact that there was a bare, fur-free patch on our cat’s right front leg. A fungal infection? Should we see a vet? She’d begun acting strangely, too — jumping on the dining table and sniffing at human food.

Our biggest concern was whether our younger child would be eligible to attend the same elementary school as our older one, or whether we’d have to drop them off to different schools every day, come September.

January 27: The first case of coronavirus in Canada was confirmed in Ontario.

January 28: The first case of coronavirus in British Columbia was confirmed.

Both cases were linked to the epicentre of Wuhan, and the individuals were self-isolating. The coronavirus was now in Canada, but still seemed easily avoidable.

Week of January 27: A friend tells their company that in light of the coronavirus, they don’t want to do any work-related travel. Management respects their wishes, though they probably thought fears overblown.

Their company does business in China — but nowhere near Wuhan. China is enormous. It’s barely smaller than Canada in total area, and if you ignore lakes and territorial waterways, its land area is actually bigger. By Canadian analogy, a measles outbreak in Vancouver probably wouldn’t alarm parents in Saskatoon.

Also around this time I read that the Chinese government has extended the Lunar New Year holiday to slow the coronavirus’ spread. Definitely, definitely not the flu.

January 31: My EV news scanning informs me that renowned epidemiologist Elon Musk expects “corona” to be comparable to other forms of the common cold. Two months before, he had promised to “solve” autism and schizophrenia with a brain chip.

Tesla’s Chinese factory would reopen on February 10 — ahead of the country’s other auto plants — after the Communist Party rushed 10,000 face masks, disinfectant and other supplies over. Good thing they never expect favours in return. In late March, Musk’s “coronavirus equals the common cold” tweets are still up. Dangerous coronavirus myths are starting to pop up on social media and right wing conspiracy theories seem to be going mainstream.

This is an era where billionaires go as unchallenged as Louis (“divine right of kings”) XIV. The only person they need to fear, it seems, is Saudi Arabia’s Crown Prince.

February 2: I watch the last 15 minutes of Super Bowl LIV so I have something to talk about at work the next day. To my hilarious dismay, no one else at the office did.

It was a welcome levity. The dam would burst; the virus would punch through; our lament would begin.