Club Quarantine: Queer love from Toronto to the world 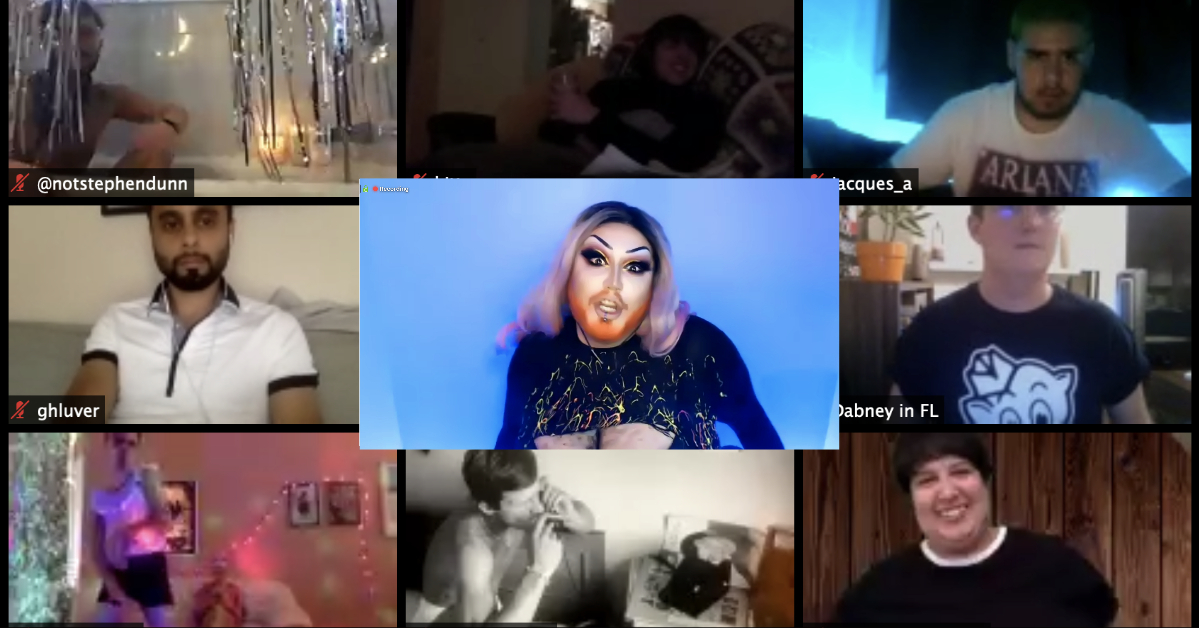 “My plants are talking to me,” Club Quarantine co-founder and comedian Brad Allen joked at the start of the online dance party’s one-month-anniversary live stream on Wednesday. “A little bit of cabin fever over here, but you all are keeping us alive.”

The feeling was mutual for hundreds of people in Toronto and across the world who stayed in and partied that night, getting their queer groove on in the only communal way they can in the time of COVID-19.

“For me, Club Q represents a release from the drudgeries of everyday life during the quarantine,” said Clare Din, a yoga teacher in Philadelphia who’s joined Club Q almost nightly for the past two weeks. “I also get my 20,000 steps in every time I’m on, so there’s a health benefit, too.”

The nightly interactive club provides a welcome respite and outlet for pent-up creative energy for thousands of cooped-up partiers, and is an increasingly popular venue for acts and promoters no longer able to put on live shows. They include such big names as Charli XCX, who played to a capacity 1,000-person crowd last month.

“We get a lot of messages from people saying that ... Club Q is the one thing to look forward to in their day and it's like this light at the end of the tunnel,” said Mingus New, a digital creative and another of Club Q’s co-founders.

Rebecca Black showed up for the anniversary night and danced along to “Friday,” her viral track that broke the internet in 2011, before the chat-channel crowd exploded in admiration for her new single, “Closer.”

Rebecca Black plays “Friday,” the 2011 track that made her internet-famous, at the online Club Quarantine on April 15.

“For me, Club Q represents a release from the drudgeries of everyday life during the quarantine,” says one regular @reachclubq reveller. @5thEstate joined the online queer party this week for its one-month anniversary featuring @MsRebeccaBlack.

New said it was inevitable the queer community would navigate quickly away from social isolation and into a safe, shared online space.

“Partying is obviously so important to queer culture ... always has been, always will be,” he added. “It's kind of like a church ... queers need to be able to be around other queer people and express themselves and put on a stupid look and dance.”

The code to get in is dropped every night at 9 p.m. Eastern on Club Quarantine’s Instagram page, which had almost 50,000 followers as of this writing. But the parties go down on Zoom, the video-conferencing app that allows for anyone to share their video and for moderators to pick screens to highlight for everyone.

This has encouraged partiers to create elaborate installation pieces (one pole dancer attaches their phone to their ceiling for a bird's-eye view of their performance, for example) and dress in their most over-the-top outfits and creative makeup, waiting to be picked out for a spotlight.

“It's a great opportunity to go online and be seen and be loved and affirmed and who you are,” New said.

While the online version will never fully replicate the packed dance floor experience, it has also opened up the scene to those who might otherwise not get to participate, including people with disabilities and social anxiety, the underaged, and those who are in the closet.

It’s the type of social connection necessary these days, especially for the artists and musicians who would otherwise be earning a living creating for in-person audiences.

Drag performer Kendall Gender speaks about working at online parties, including Club Quarantine, in an interview with National Observer on April 16.

“We all needed this,” well-known Toronto drag performer Allysin Chaynes said later in the evening, before launching into a performance of “Intergalactic” by the Beastie Boys.

“When (social isolation) first started, I felt really, really, really down,” said Kendall Gender, a Vancouver-based drag queen. The self-described extrovert only shook off the funk with her first online show, and featured at Club Q last Friday.

“It was so engaging,” Gender said of the experience. “You really feel enveloped within this community ... it felt a lot more engrossed in something bigger.”

The four friends behind Club Q — the others are recording artist Andrés Sierra and producer/DJ/party thrower Casey MQ — started it the first night Toronto’s bars and clubs were told to close (March 16), and promised early on to keep it going every night until the quarantine was lifted.

With no end in sight, the team is now settling in for the long haul. They’re collaborating each Wednesday with Paper Magazine, for example, who helped bring in Black for an evening that also featured Chilean DJ Javiera Mena, European techno musician Himera, New York glam duo Sateen and Chaynes.

They’ve also hired someone to take care of administrative tasks and brought on more moderators to keep the space safe, all of which should allow the core four to occasionally take a night off.

“Not that you can do much with your night off, but I can just plan to watch a Netflix movie or, like, eat dinner that night,” New said.

They've also just discovered they can live-stream the events to YouTube, meaning people can still watch future headline events even if Zoom's capacity is exceeded.

Rebecca Black dances to her new song, “Closer,” at Club Quarantine on April 15.