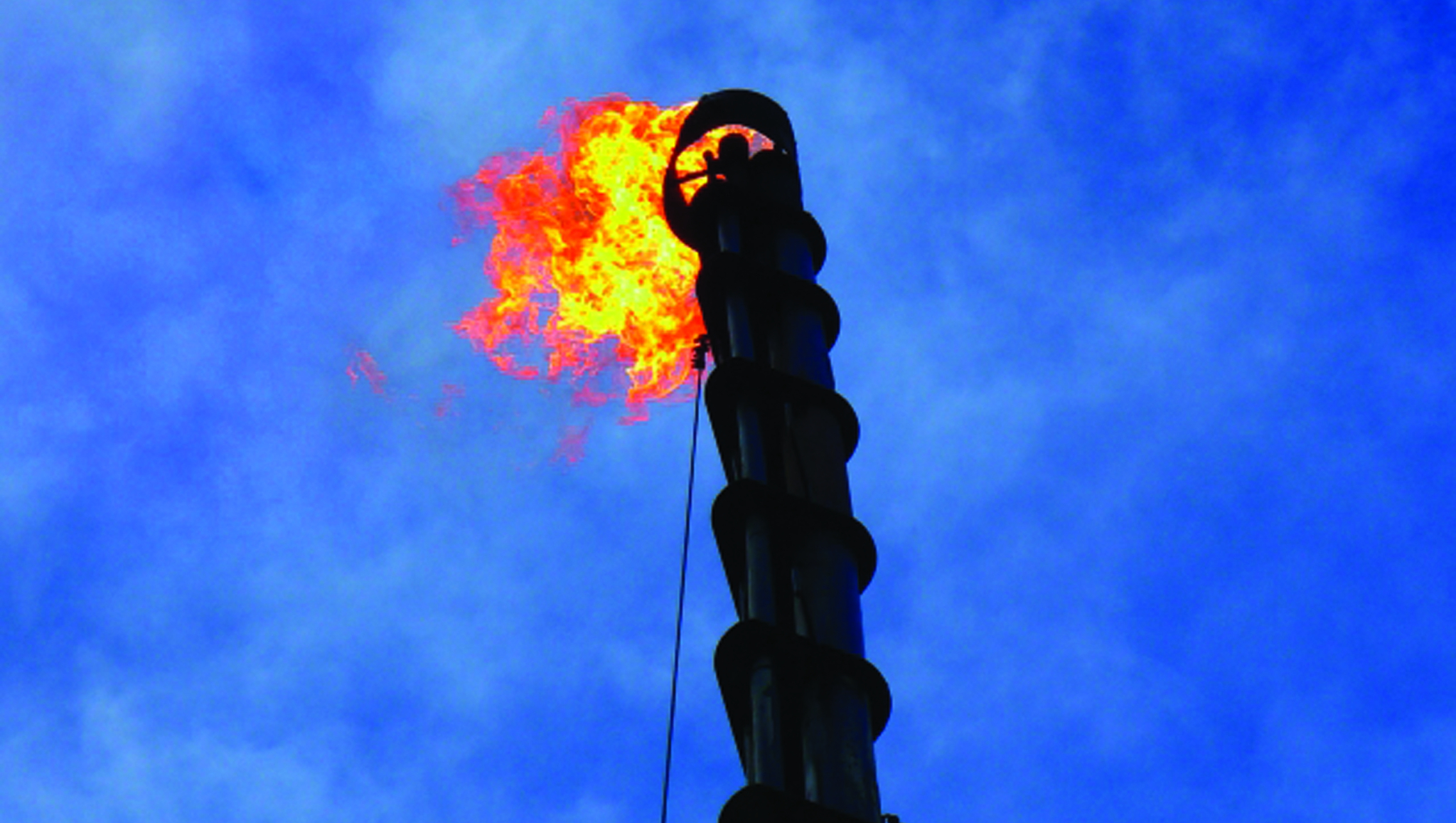 Ottawa on Friday announced a $750-million fund for cracking down on methane, which is sometimes flared off from oil and gas operations. Alberta Energy Regulator photo
Previous story
Next story

The two measures consist of $1.72 billion for cleaning up orphan or inactive wells in British Columbia, Alberta and Saskatchewan, the prime minister said, as well as $750 million to create an “Emissions Reduction Fund” to help firms meet federal methane-reduction standards. A tenth of that fund, designed to offer loans, is meant for cutting pollution in Newfoundland and Labrador’s offshore oil industry.

Trudeau said he wanted to support workers and their families and help oil and gas companies avoid bankruptcy, while supporting his government’s environmental goals, after the coronavirus pandemic and an oil-price crash have created new obstacles for the industry.

Many energy firms are experiencing cash-flow issues and “don’t have the funds to invest in technologies to reduce emissions or fix methane leaks,” the prime minister said from Rideau Cottage in Ottawa, adding that the new fund would create jobs to allow this kind of work to be done.

Methane is a greenhouse gas 86 times as powerful as carbon dioxide at trapping heat over a 20-year period. The fossil fuel industry, a primary contributor to atmospheric methane, burns it off or vents it as an unneeded byproduct of drilling, and it also leaks accidentally from equipment.

Scientists say methane is jeopardizing efforts to halt the global temperature rise and slow climate change. Canada has committed to cutting methane from the oil and gas sector by 40 to 45 per cent from 2012 levels by 2025.

Meanwhile, orphan wells are a major problem in Western Canada. National Observer has reported Alberta’s industry-funded non-profit, the Orphan Well Association, has an inventory of 2,789 wells that need to be abandoned and a further 3,331 sites where land must be reclaimed.

The Supreme Court of Canada has ruled companies cannot use federal bankruptcy laws to avoid regulations requiring them to pay for cleaning up abandoned wells. But it could take more than 2,800 years to clean up some of them, a senior official from the Alberta Energy Regulator has told industry.

A private presentation in 2018 by a high-ranking official from the regulator estimated it could cost $260 billion to clean up all environmental liabilities, including problematic wells, pipelines and tailings ponds. The presentation describes that figure as “likely less than the actual cost" and warned liabilities from conventional wells were getting larger, although the regulator would later characterize it as a “worst-case” scenario and an "error in judgement" following media reports.

“We’ve listened to the concerns of landowners, municipalities and Indigenous communities who want to make sure that the ‘polluter pays’ principle is strengthened and that their voices are heard,” Trudeau said about orphan wells.

Overall, the two commitments are expected to maintain “roughly 10,000 jobs” countrywide, the prime minister said, with more than half of those based in Alberta.

“Just because we’re in a health crisis, doesn’t mean we can neglect the environmental crisis,” he said.

Canada's domestic and export credit agencies, Export Development Canada and the Business Development Bank of Canada, will also offer fresh support to “medium-sized” energy firms in trouble, Trudeau added, so they can keep employees on the payroll. The government is expanding eligibility for the Business Credit Availability Program it first announced March 18.

Environmental advocates who spoke with National Observer on Friday said they were relieved Trudeau — at least for now — has avoided a much larger bailout of the oil and gas industry. One media report, for example, had suggested a $15-billion package was in the works. It also avoids some demands, like freezing the carbon tax or delaying climate regulations, that the oil lobby has been pushing for.

Still, they also raised questions about whether the funding would come with sufficient oversight, be steered by appropriate voices such as Indigenous communities and municipalities and not the federal cabinet and be able to stick to the stated goal of cleaning up emissions and contaminated sites, without money being funnelled into the hands of large, still-profitable corporations.

Julia Levin, climate and energy program manager at Environmental Defence, said she was glad to see the government stick to federal methane regulations, given Ottawa has been negotiating equivalency agreements with provinces that she said could weaken pollution standards.

“But the taxpayers shouldn’t be on the hook for compliance,” she added. “These companies have known they have to work on their methane reductions for years, and now, all of a sudden, we have to pay so they can have more efficient infrastructure.”

Marc Lee, a senior economist with the B.C. office of the Canadian Centre for Policy Alternatives, said he liked that the methane fund was designed as repayable loans rather than a direct subsidy to industry.

“The government definitely needs to make an attempt to try to align its support in Alberta with its broader climate and environmental measures,” he said about the fund. “There is a lot that you could criticize around that, but in this particular moment, with the pandemic, I think it’s overall a decent result.”

Lee said given the broader scope of potential environmental liabilities in the hundreds of billions of dollars for Alberta, the $1.7 billion announced by Trudeau on Friday seemed small.

But he noted that, “in the current context, where unemployment is a concern, and there needs to be another level of regional and industry-level support, it’s not the worst thing in the world.”

Part of the government’s commitment includes a $200-million loan to the Orphan Well Association. Late last month, Alberta moved to expand the organization’s powers, for example allowing it to take ownership of orphan pipelines and wells that can still produce petroleum.

Levin said it was key that inactive wells don’t become orphans. She has called for legislated timelines for wells to be cleaned up, and for security deposits to be made up front. Without details on that, she said, there is uncertainty over whether the funds could be used to “let companies off the hook.”

She also wants to see funds administered by First Nations representatives, municipal governments and landowners so the decision of which well to clean up and when does not become politicized.

Following Trudeau's announcement, Alberta Premier Jason Kenney said he was “grateful” and thanked Trudeau for an “important first step.” He said the funding to address inactive wells “will immediately save or create thousands of jobs.”

“Reducing environmental liabilities is a priority for the oil and natural gas industry and this initiative will allow important work to accelerate, while supporting thousands of jobs,” McMillan wrote.

Editor's note: This story was updated on April 20, 2020 at 9:50 a.m. Eastern to clarify that the description of the $260-billion estimate as a "worst-case" scenario came after a private presentation had stated the figure was likely less than the actual cost.

It goes without saying but I

It goes without saying but I will say it anyway......... It is shameful and outrageous that we the taxpayers must use up billions of dollars cleaning up for the oil industry while it currently is attempting to get billions more in subsidies from government while at the same time arrogantly requesting the removal of hard won environmental laws (restrictions).

This is being presented as a

This is being presented as a climate win. Does Ottawa say how much climate pollution will be cut by this $1.7b?

This appears to be yet

This appears to be yet another gigantic contribution of our tax dollars towards the coffers of the Oil Giants. To appease these unselfish and undemanding (non-profit) law abiding Corporations. Having read the demands to defer regulations, expressed, in a 13-page secret memo, by CAPP, dated March 27, 2020, addressed to The Honourable Seamus O’Regan, P.C., M.P., House of Commons, Ottawa. The Subject of which is entitled: COVID-19 Crisis Response – Actions required regarding Federal Policy and Regulations. I am curious as to what else our government has implemented or legislated aside from this $1.7 billion gift "loan". Note that their demands to defer regulations - some indefinitely - are all due to the present pandemic.

If oil and gas is so

If oil and gas is so profitable, why are billions of taxpayer dollars required at every step of the way (exploration, transportation, refining, clean-up)?
Wake up Canada! We are being used and lied to.

It's about time someone got

It's about time someone got working on these derelict an dangerous wells. Thank you, JT.

Amazing to hear these

Amazing to hear these champion whiners complain today that the $1.7 billion Ottawa handed over yesterday isn't enough.
For decades the industry rejected all measures to ensure well clean-up (up-front bonds and strict timelines). After decades of milking govts for subsidies, obstructing climate action, and rolling back environmental protections, they now have the gall to demand that the govt step up with more support.
"Oil lobby group asks Trudeau government to suspend environmental, lobbying laws due to COVID-19" (Global News, Apr 17, 2020)
https://globalnews.ca/news/6830754/capp-justin-trudeau-laws-coronavirus/
These 19th century robber barons made a killing pillaging our resources, while downloading the environmental and health costs onto taxpayers, future generations, and the environment. They somehow forgot to put money aside for a rainy day. Now they are sticking taxpayers with the bill for cleanup too.
Oil & gas companies can't or won't pay municipal property taxes. AB's oil & gas industry has barely started to fund its clean-up liabilities: north of $260 billion.
What happened to polluter-pay?

"Orphan wells cleanup funding 'a subsidy to industry,' says Alberta farmer" (CBC, Apr 17, 2020)
"A lot of these sites have sat there for 30, 40 years. Our landowner associations have been telling govt that this was a problem waiting to happen for 20 years. And so they didn't enforce any timelines on when these wells should be reclaimed.
"So these companies now have learned that they can abuse a system. They don't have to pay the landowner. They don't have to pay the property tax. And now it appears they don't have to pay to reclaim the land either.
"That's a pretty good business model when you're allowed to suck the resources out and not have to pay any of the environmental or social liability costs for doing so."
https://www.cbc.ca/radio/asithappens/orphan-wells-cleanup-funding-a-subs...

I am infuriated by the bail

I am infuriated by the bail-out of the oil companies with MY tax dollars. Let Alberta do like every other province in Canada and creat a provincial sales tax that could be used for cleaning up the petroleum spills and old wells. Alberta should be frozen out of ANY federal financial support until it does its part by creating a provincial sales tax. Canadians in the rest of Canada should not have to subsidize the financial mismanagement of the Alberta government.