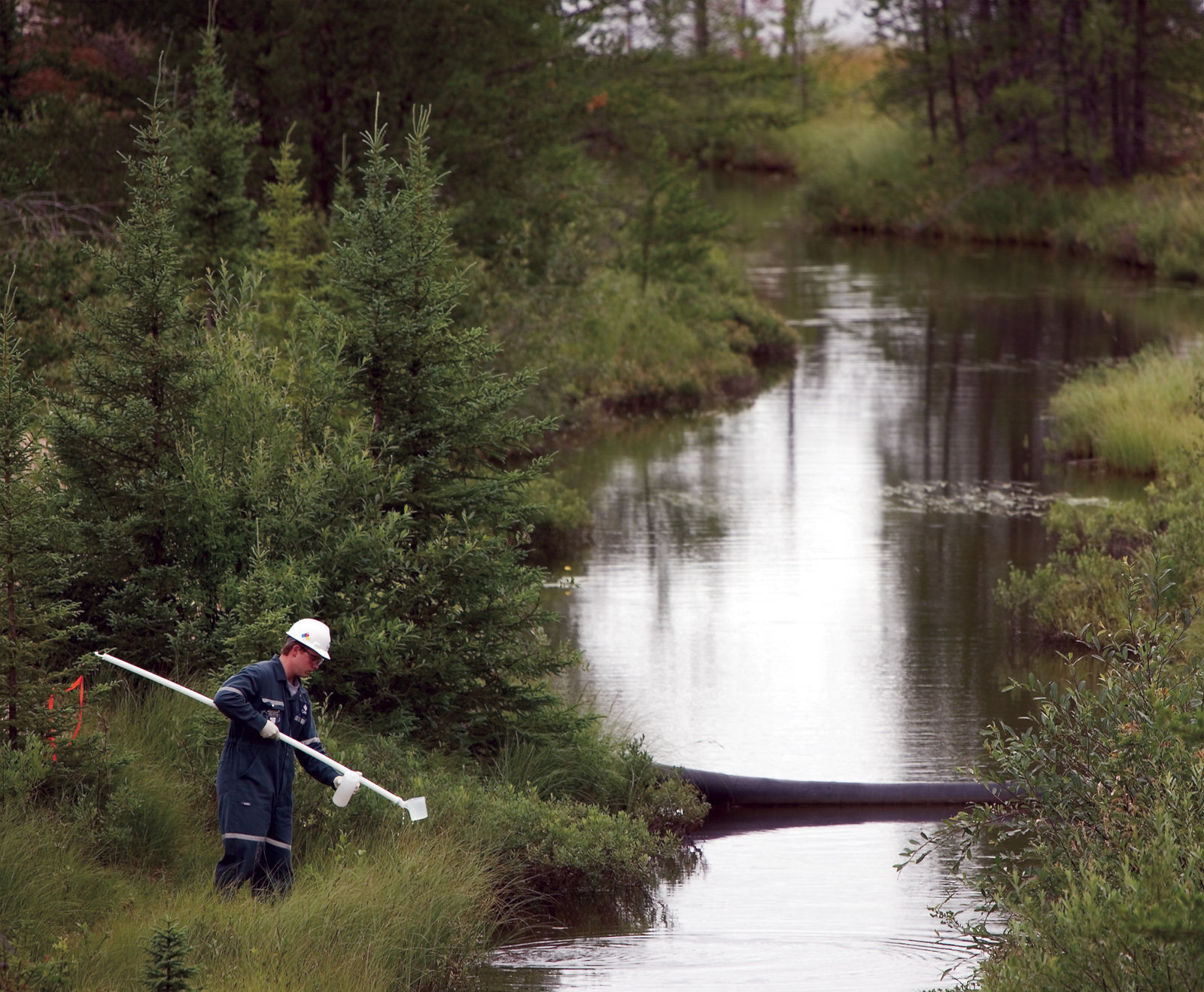 Water sampling at the Key Lake/McArthur River operation that went into care and maintenance in 2017. In 2018 the shutdown became indefinite. Photograph courtesy of Cameco.
Previous story
Next story

Hundreds of workers in northern Saskatchewan will be hit with a 25 per cent pay cut in May, as Cameco Corporation’s Cigar Lake mine and Orano Canada Inc.’s McClean Lake mill extend their production suspension past the four week period that was announced on March 23.

“The global challenges posed by this pandemic are not abating — in fact, they are deepening,” Cameco’s president and CEO Tim Gitzel said in a written statement.

Cameco Corporation is the world’s largest publicly traded producer of uranium and Orano Canada Inc. operates the mill where ore from Cigar Lake mine is processed.

“We thought since things were still evolving pretty rapidly, we’d give it four weeks and see how that duration unfolded, and as we saw, not a lot changed for the positive,” Jeff Hryhoriw, director of government relations and communications at Cameco Corporation told National Observer.

Cameco employees who were at Cigar Lake are continuing to be paid their full pay and benefits for the four-week period since care and maintenance — an upkeep period where production goes on hold at the mine site — began about a week after the announcement in March.

In May, that will drop to 75 per cent of their regular pay, plus full benefits. The 75-per-cent arrangement is in place for May and June, but Hryhoriw said that the company can’t project beyond that as to how things will unfold.

“There’s still a lot of uncertainty out there and restrictions remain in place. We’re going to continue to monitor the situation around COVID-19 and some of the precautions that have been put in place by government and public health authorities,” Hryhoriw said.

Care and maintenance crews who are remaining to work and travelling to the site will continue to be paid their full pay and benefits, and an additional 10 per cent temporary recognition pay.

“Just to recognize them going above and beyond to keep our facilities safe and in good condition during this period of pretty sizable uncertainty around there,” Hryhoriw said.

“The idea of not knowing when you’re going to go back to work and how things are going to change has to have a massive impact on the mental well-being of a person,” Ron Woytowich, mayor of La Ronge, Sask.

According to Hryhoriw, approximately 50 per cent of the roughly 320 employees and another 240 contractors at Cigar Lake are from communities in northern Saskatchewan. The number of employees dropped to 75 during care and maintenance. The workforce at Orano’s McClean Lake mill was reduced from 160 to 50.

“The idea of not knowing when you’re going to go back to work and how things are going to change has to have a massive impact on the mental well-being of a person,” said Ron Woytowich, mayor of La Ronge, Sask., a town in the Far North about five hundred kilometers south of Cigar Lake.

The effect on La Ronge itself is huge. “In economics we call that a multiplier effect, and I don't know what the mine’s effect would be [but] I can guarantee you that the multiplier effect of those mines and the salaries and everything that goes with it is huge. There is that massive effect on a community,” Woytowich said.

Global uranium equities have climbed since Cameco shut down Cigar Lake, the last producing mine in Saskatchewan’s Athabasca Basin.

Uranium prices that have suffered recently amid a glut in supply and decreased market value for the product are experiencing a rise in value after the Cigar Lake closure.

​​​​​“Interestingly enough, the uranium industry is having a bit of a turnaround … It’s ironic but the less Cameco does, the better off the company does,” said Brooke Dobni, professor of strategy at the University of Saskatchewan’s Edwards School of Business.

It’s basic supply and demand, according to Dobni.

“Because [uranium is] a commodity in the global market, the market supply is starting to restrict a bit and so the price goes up. Whether or not there’s actually more demand is another story. It could be just less supply, and I think we’ve seen that.”

Dobni speculates that stopping production of uranium at this time will be good for Cameco in the long run from a market perspective.

He said that it can be less expensive to buy uranium from a secondary producer at a lower price and sell it second-hand to clients while preserving their asset, which is uranium in the ground.

“The short-term pain is going to benefit them in the longer term because of the economics of uranium in the world, and to me it isn’t responsible to be mining and selling uranium at a loss. Given that uranium is a non-renewable resource,” Dobni said.

He said that when the price of uranium goes up, Cameco will be able to sell their resource for a better profit.

​​​​​​“That’s the situation we’re in right now, so there’s a bit of a honeymoon now for uranium, but it’s not going to affect production in the next few months, so I think Cameco and others are going to stay shuttered. You know, they’re going to take it a month at a time,” Dobni said.

The future depends on how Cameco makes it through the crisis.

“Despite the current uncertainties as a result of the COVID-19 pandemic, we expect our business to be resilient,” Gitzel said.

“With many governments and communities declaring states of emergency in their jurisdictions, our utility customers’ nuclear power plants are part of the critical infrastructure needed to guarantee the availability of 24-hour electricity to run hospitals, care facilities and essential services,” Gitzel said.

”So our customers are going to need uranium. As a reliable, independent, commercial supplier, we will continue to work with them to help meet their delivery needs.”