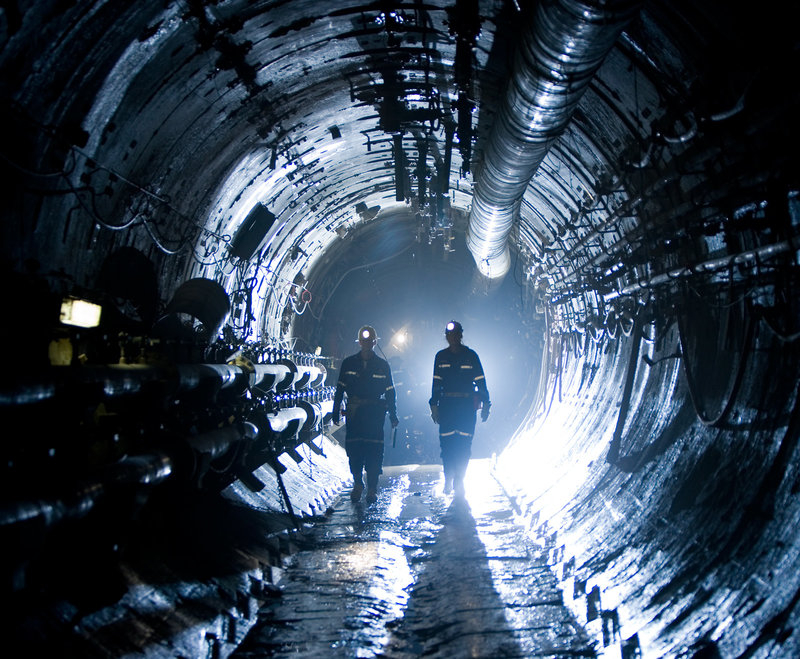 Underground tunnels at Cigar Lake mine are reinforced with concrete. Photograph: Courtesy of Cameco
Previous story
Next story

The economic cost of COVID-19 is hitting northern Saskatchewan — causing closures and lost jobs. Cameco’s shutdown of the Cigar Lake mine, combined with that of partner company Orano Canada’s McClean Lake mill, are now taking place. Real and far-reaching impacts of these closures have started to hit home.

Cameco corporation announced in March that the company is temporarily suspending production at Cigar Lake uranium mine and is placing the facility in care and maintenance mode due to the threat posed by the COVID-19 pandemic. Impact on the ground is starting to play out.

Cameco Corp is the biggest publicly traded uranium company in the world and accounted for 18 per cent of production worldwide in 2015. It is also an economic staple for north Saskatchewan. Cameco’s partner, Orano Canada Inc., simultaneously shuttered its McClean Lake mill where ore from Cigar Lake is processed.

“A large portion (about 50 per cent) of Cigar Lake’s workforce comes from the surrounding communities and First Nations in northern Saskatchewan, which are likewise remote and isolated, with limited health services,” Jeff Hryhoriw, director of government relations and communications at Cameco Corporation told National Observer.

“These realities would greatly compound the problems a COVID-19 outbreak would present, so we need to take every precaution to ensure we don’t inadvertently become a point of transmission into these communities,” Hryhoriw said.

Cameco has ceased commercial ore extraction at Cigar Lake mine. It is moving already extracted material through the remainder of the process.

All impacted Cameco Cigar Lake employees will continue to receive their regular pay and benefits during the four-week care and maintenance period, but Cameco says it can’t speak for the contract workers, since those arrangements would be up to their employers.

The Cameco shutdown also meant closing the partner mill where the ore from Cigar Lake is processed. The workforce at McClean Lake mill is being reduced from 160 to 50 during maintenance. Orano Canada and its partners in the McClean Lake joint venture operation are also shutting down and “will work to determine the restart date and conditions in due course.”

“Unemployment rates are sky high. The number of full-time, decent jobs has been declining anyway, separate from this collapse right now. The full impact on the community as a whole is staggering.” Ken Coates

“This is a difficult time for many and we understand the concerns we are hearing,” Orano Canada Inc. president and CEO Jim Corman said in a statement.

Shutting down and reopening uranium mines is costly and labour intensive. More so than with other kinds of mining operations.

“Closing that [Cigar Lake] mine is not a question of just flicking off the switch,” said Ken Coates, Canada Research Chair in regional innovation at the University of Saskatchewan’s Johnson-Shoyama Graduate School of Public Policy.

“It actually takes a lot of time and effort to close a mine down properly to make sure that the machinery is protected, cleaned up properly and everything like that. Particularly uranium mines more than most. And then you have exactly the same kind of expenses at ramp-up time. You don’t just walk back and push a button and everything gets going again,” Coates said.

“If you’ve got a placer mine or something like that you can turn off the taps pretty easily, but with big mining projects like this with literally hundreds of millions of dollars of sophisticated equipment, every closure is a risky enterprise.”

​​Coates said that his real concern is that these are vulnerable communities at the best of times.

“Unemployment rates are sky high. The number of full-time, decent jobs has been declining anyway, separate from this collapse right now. The full impact on the community as a whole is staggering.”

“For our business entities, the impacts are and will continue to be extremely challenging in the coming months,” LLRIB’s business arm, Kitsaski Managment Limited told National Observer in a statement provided by Chief Tammy Cook-Searson.

“Although the unprecedented loss in economic activity causes us significant concern for ongoing sustainability, we will always prioritize the safety and well being of our employees above all else.”

Coates said that First Nations have been leading the call across the country to have some of these mining projects closed down.

“The First Nations are [concerned] with very good reasons about the possible threat of this virus spreading into their communities and they will take any action to stop that from happening,” he said.

He said the economic downturn has been steep in the region, even before COVID-19, but has flown under the radar.

“That devastation has been largely hidden from national view. Southern Ontario doesn't care too much about what happens in a small series of isolated Indigenous, Métis and First Nations communities in northern Saskatchewan,” Coates said.

Coates called the Cigar Lake shutdown part of a national plan to close down resource extraction operations that could endanger nearby communities during COVID-19.

He said that there is “big concern in the oilsands operations,” because of their proximity to vulnerable communities and that “they’re already talking about steps they can take.”

The Agnico-Eagle Meliadine gold mine, located north of Rankin Inlet in Nunavut, was put into “lockdown mode” after residents blocked an access road. Calgary-based Dominion Diamond Mines ULC shut down its Ekati diamond mine in the Northwest Territories.

In Quebec, the mining sector (with the exception of aluminium manufacturing) ramped down operations to a minimum after Premier François Legault announced the closure of non-essential services.

Ontario Premier Doug Ford listed mining as an essential service. The sector is allowed to continue in full operation, but there have been voluntary closures.

That compounds an ongoing downward trend in Western Canada that has people worried, according to Brooke Dobni, professor of strategy at the University of Saskatchewan’s Edwards School of Business.

“I was always a bit skeptical when our federal government said, ‘Yeah we got an economy on fire.’ I kept saying to people, have you been to Saskatchewan lately? Because we’re not on fire here.”

“Margins are so tight and you can see the wrench that something like this throws into the economy. This is a whole new reality that nobody knows what to do about.”

Dobni said that closures in the mining sector will have a ripple effect because of jobs that depend on servicing companies such as Cameco.

“Most of the people in the North either live off the land or they’re in the service of businesses like Cameco or the Government of Saskatchewan or another mining company. It’s tough even in good times, let alone difficult times,” Dobni said.

He said that part of this relief package that the federal government has come in with is designed to get money into the hands of the people that need it and that recovery all depends on how quickly that can happen.

“It’ll be interesting to see how that works because they’re talking about fiscal policy, monetary policy and they’ve got to get money into the hands of the people, the common folk,” he said.

Dobni doesn't think that renewed interest in nuclear power will be enough to save a company like Cameco.

He does, however, see a bright future for uranium markets, which are currently at mid tier, in the longer term. Mid tier means that a market is neither big nor small by comparison to other industries.

“Uranium’s the cleanest approach to providing power […] It’s very expensive, there’s a lot of infrastructure but […] for the most part uranium’s the answer to cleaning up the environment or nuclear power — but we’re slow to take that up,” Dobni said.

“Because it’s a big expense to build a nuclear power plant, but it’s the long-term. And everybody now thinks short-term. it’s hard to make long-term economic business decisions when you’re in that type of situation.”

Dobni said that as a commodity-based economy in Canada, especially in western provinces and Saskatchewan, we live and die by economic cycles; whether it be grain, oil and gas or uranium.

Usually those commodities follow different cycles. But not this time.

“They bottom out at different times. So grain farming might be up, but oil’s down; or oil’s up and the price of grain’s down. Well, the perfect storm here is everything’s down,” Dobni said.

In the long-term, Dobni said that because of the temporary nature of the economic shutdown due to the virus, there will be an economic “garage sale” when things open up again. This could help Cameco and other industries in the long-run.

“Once we get through this, and we will, my prediction is that you’re gonna see an economy on fire because things are gonna take off. There will be this pent up demand, reduction around the world in inventories whether it be uranium or grain or potash,” Dobni said.

“So this could actually benefit Cameco in the longer term, as much as I hate to say that, because it’s a global pandemic. Not just Cameco, but other business as well.”

Dobni said that a lot of businesses, especially in the U.S., have very strong balance sheets. “They want to do things, but now they’re just gonna hang back again and so they’ve accumulated all this cash and it’s gonna be a garage sale after this.”

According to Cameco, the mining operation at Cigar Lake is being ramped down and placed into care and maintenance for four weeks. During this time, Cameco says it will assess the status of the situation and determine whether to restart the mine or extend the care and maintenance period.

“We’re in full consultation with public health authorities to help develop a logistical plan to safely move workers off site and back to their communities, and for those employees who are still needed to keep the mine in a safe state during care and maintenance,” Hryhoriw said.

Hryhoriw said it’s premature to talk about plans to restart the mine or what that might look like at this time.

“There would be many factors that would play into those kinds of decisions, not the least of which is how long the operation might remain in suspended production and in care and maintenance to begin with, which we can’t predict at the moment.”

He stressed that there have been no confirmed cases of COVID-19 among employees at Cigar Lake to date.

Leaders on the ground are bracing for what’s to come.

“The shutdown of this mine will be an economic blow to the North and my thoughts are with those who now find themselves unemployed during this difficult time,” said Gary Vidal, Conservative MP for the riding of Desnethé—Missinippi—Churchill River.

“This decision, though tough, is important to maintain the health and safety of the employees and their communities.”

Vidal said that his office has been assisting northern residents to access supports and is prepared to help those affected by this shutdown.

“I will tell you that [Cameco] is a very good employer. They treat their staff good and they have been a massive benefit to La Ronge and I hope that they resume services quickly,” said La Ronge Mayor Ron Woytowich.

“I’m hoping that doesn't mean layoffs, but I think common sense says that there is this effect and it’s just gonna be the trickle down effect,” Woytowich said.

“My gut feeling is it’s gonna be longer than a month.”