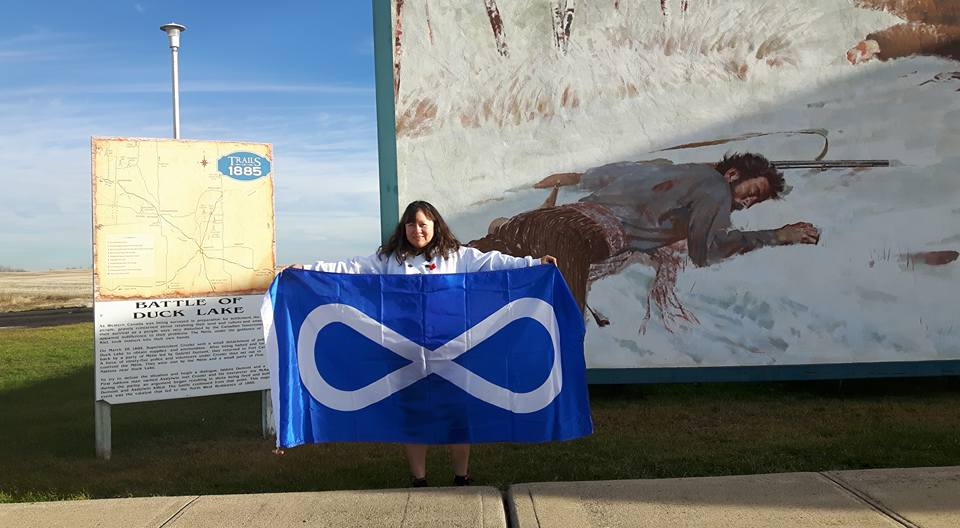 Mary Ann Morin at Batoche historic site holding the Métis flag. Louis Riel's Northwest Rebellion ended with the Battle of Batoche in 1885 followed by the collapse of the Provisional Government of Saskatchewan. Photograph courtesy of Charlene Lavalee.
Previous story
Next story

The elected treasurer for the Métis Nation-Saskatchewan is demanding a seat at the table of the Provincial Métis Council following its court appeal of her role as treasurer.

“Regardless of whether there’s an appeal or not, I am still to sit at the table and be considered a part of the Provincial Métis Council,” Mary Ann Morin told National Observer in an interview Wednesday.

On March 27, the Métis Nation of Saskatchewan appealed a March 9 declaratory judgment by the Queen’s Bench for Saskatchewan in Prince Albert ruling that Morin remain in her role as treasurer, but she said she’s not being allowed to participate.

“I’ve always said … right from the start, that I did not resign. I am still the director. I am still responsible for the duties that are given to me under the constitution and legislation of our Métis people,” Morin said.

Morin said she is still responsible for the actions taken by the executive while the appeal is ongoing.

On April 22, she wrote to Carolyn Bennett, minister of Crown-Indigenous Relations, requesting that Métis Nation of Saskatchewan’s federal funding be put on hold and for the group to be placed under third-party management until it has demonstrated financial responsibility to the people it represents, and until internal governance issues are resolved.

She also asked for copies of all financial correspondence between the federal government and the Métis Nation of Saskatchewan.

“As a duly elected leader … I want to ensure (COVID-19 relief) funding reaches the areas in most need as the nearest hospital is 500 kilometres away and 16 cases in this area have been reported.”

“These people voted for us and they wanted change. They showed that in the votes. There’s only one more year to the elections,” Mary Ann Morin.

She also requested the minister’s support in closing negotiations of the Île-à-la-Crosse residential school on behalf of the survivors. The boarding school was founded in the 1860s and housed children from northern Saskatchewan until it closed in the 1970s.

“There are very few people left and it has left our nation with unfinished business, which continues to hurt the people and their descendants.”

Morin told National Observer that her job is more important than ever right now with communities at risk due to the coronavirus pandemic. She said that COVID-19 relief funding needs to get to the right people quickly.

Four months after Morin was elected treasurer in 2017, she wrote a letter to the executive addressing what she saw to be a lack of transparency.

In that letter, she said she would resign if her concerns were not addressed, but the executive took the letter as a resignation.

Morin thinks the reason they tried to remove her from her position was because there has always been conflict between the treasurer and other executives.

“Why would (the Métis Nation of Saskatchewan) instigate getting rid of a person who has the ability to meet the obligations of the federal government …?

She said that regardless how long the appeal takes, and since she did nothing wrong, she needs to be allowed into the workspace to do her job.

“A declaratory judgment is a binding judgment from a court defining the legal relationship between parties and their rights in a matter before the court. Declaratory judgments are conclusive and legally binding,” Morin said in a statement Wednesday.

Morin said she ran for the position so she could maintain high standards of accountability and transparency within the Métis government.

“I’ve been watching the politics for many years and nobody seems to know what’s going on. We didn’t know what money was coming in, what money was going out and what was being settled on behalf of the Métis people.”

In 2015, Métis Nation of Saskatchewan’s federal funding was put on hold and it had to agree to a third-party funding proposal to continue to operate.

When Morin was elected, she said she set out to ensure that wouldn’t happen again.

“These people voted for us and they wanted change. They showed that in the votes. There’s only one more year to the elections.”

Morin said she will be running again in the next election and suggested Métis citizens should call for a vote of non-confidence on the current leadership’s financial practices if they want the change they voted for to happen.

“It’s up to them to make leadership accountable. It is up to them. Each and every one of them. If leadership (is) not meeting your needs, they don't rule you. You rule them.”