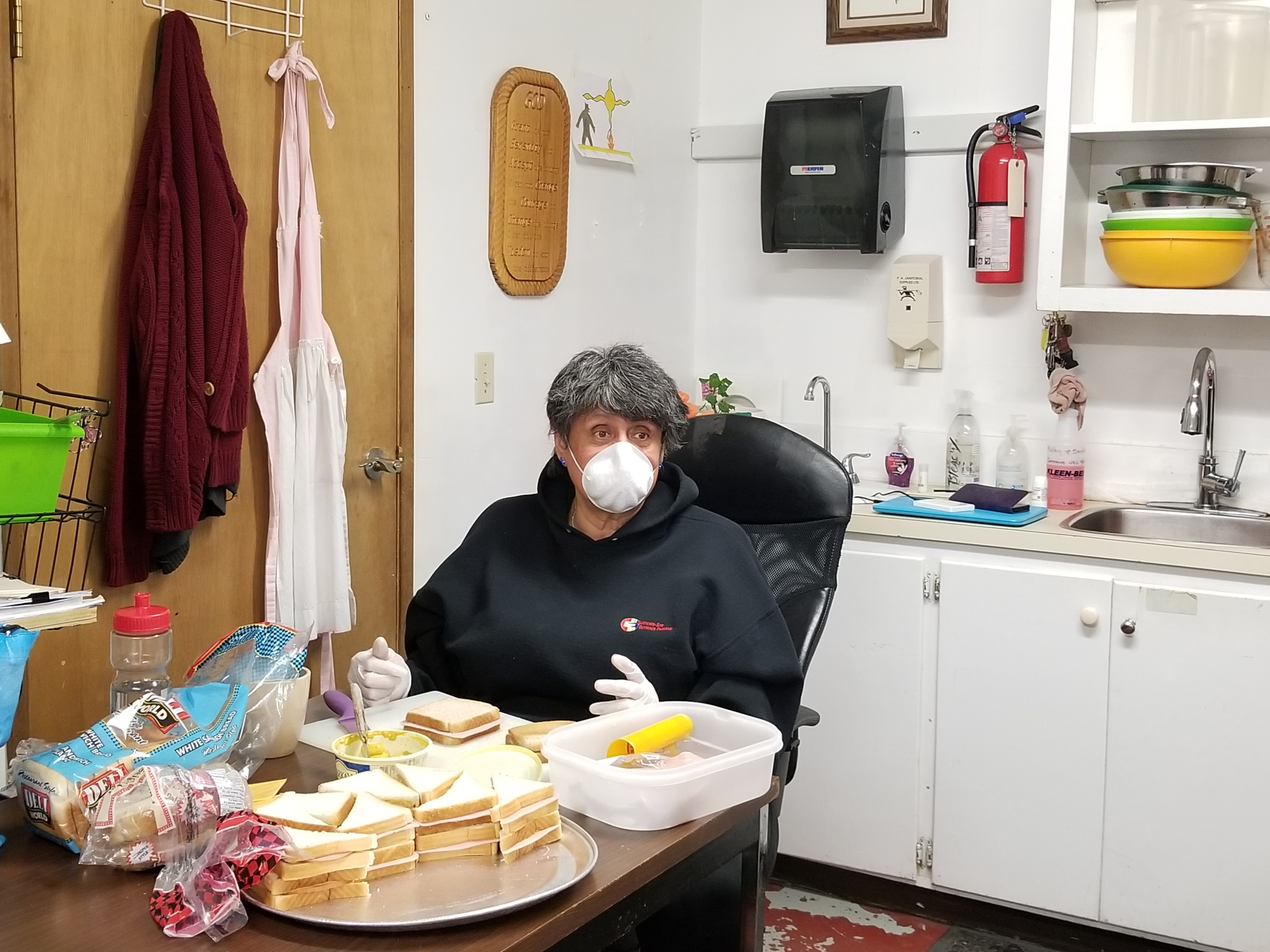 Staff had just finished sanitizing the makeshift emergency homeless shelter in La Ronge, Sask., when it flooded again on Tuesday.

Two outreach workers hurried to make lunch for homeless people in the town who depend on them for a hot meal every day.

“The present virus is causing a state of emergency and a major shortage of lodging for the everyday homeless," said Ron Woytowich, mayor of La Ronge and executive director of Kikinahk Friendship Centre.

“In La Ronge, especially in winter, the problem is real. We have about 20 locals that are consistently homeless the year round, and during winter others come to La Ronge because there are no safe spaces for them in their communities,” Woytowich said.

Woytowich said the present makeshift emergency shelter building, which is run by Kikinahk, suffers from regular flooding in the spring that has caused black mould. There are no beds to speak of, just removable deck chairs converted into cots, or a cement floor to sleep on.

People of all genders staying overnight must sleep in the same room and share the centre’s only washroom. The only thing separating staff in the kitchen from their clients is a piece of thin plastic wrap taped over the counter window.

The Scattered Site outreach program is a co-existent operation at the shelter that provides support programming to address mental health and addiction issues among the homeless.

“We have the HIV HepC surges, and in all of that, we have done that with a budget that would make a program down south cry,” she said.

“The present virus is causing a state of emergency and a major shortage of lodging for the everyday homeless," said Ron Woytowich, mayor of La Ronge and executive director of Kikinahk Friendship Centre.

Ballantyne grew up homeless and is dedicated to helping others in that situation get back on their feet. She’s Indigenous and remembers stories that her grandfather told her about the 1918 influenza pandemic that decimated Indigenous populations in the North. “People are scared,” she said.

“We have the highest-risk population. We are like Downtown Eastside Vancouver, we are like Main Street in Winnipeg, we are like in Toronto where the drag is, and we serve the entire northern population,” Ballantyne said.

“We are trying so damn hard to keep people safe and folks don’t understand that we need a space for folks. A safe place and a decent place. A place that doesn't flood every spring and doesn't fill with black mould,” she said.

In 2016, the body of a homeless woman named Tracey Nicole Bird, of the Montreal Lake Cree Nation, was found dead in a wooded area of La Ronge after temperatures dipped to –30 C.

Bird's was one of many deaths that galvanized debate over the quality of service for homeless people in the La Ronge community that remains ongoing.

“We were averaging two homeless deaths a year until the shelter opened,” Woytowich said. “That’s why it's so important to keep this up and running.”

A handwritten coroner’s jury recommendation at the time had urged the Town of La Ronge and Mamawetan Churchill River health region to develop “an overnight shelter for homeless and alcoholic individuals, who can be supervised under basic medical personnel. To include an outreach program to educate on consequences and places of assistance for those in need.”

Woytowich is appealing to the Provincial Métis Housing Corporation for help through the “Reaching Home” program that is billed as “Canada’s Homelessness Strategy for Non-Designated Indigenous Homelessness” to buy and renovate a new building, which he estimates will cost around $580,000. The plan is supported by La Ronge Housing and the Friendship Centre’s board of directors.

The building is rented on a month-to-month basis from a local businessperson which means that the owner could ask them to leave with 30 days notice. This worries staff, who fear that businesses not wanting a homeless shelter nearby could kick them out.

“One of the problems with being on a lease program is we’re not the most well liked business in this community... If we had our own building we would have that security knowing that they can’t just kick us out because they don’t want us beside their store,” said Tina Johnson, night program manager at Scattered Site.

Johnson added that it's important for the homeless to have a place to go because otherwise they will simply wander around La Ronge, making things worse for themselves and for businesses, potentially spreading COVID-19 in the community instead of remaining in one place where they can be cared for.

“Half of the [Town of La Ronge] council don’t want a shelter at all. They’re not happy with the shelter at all. According to them we import crime into the community," said Woytowich. "By the way not one of our clients is allowed in any bar or in the liquor store or anything, so they are not part of the alcohol problem," he said.

The mayor added that because of the nature of La Ronge as a point of access for services in north Saskatchewan, with the only hospital, medical clinic and RCMP detachment in the area, the need for a shelter is not something that will go away. "We might as well get a decent [shelter] that not only could we be proud of but quite frankly is safe," he said.

Woytowich said that in this situation it's key for the shelter to be close to the downtown business sector because that's where the facilities are. He said that the homeless need to access essentials without having to travel too far. "They will always be in that area because of the drug stores and because of the medical clinic, so we're trying to be super centrally located," he said.

COVID-19 has added urgency to the situation, with some employees saying that they can no longer work for fear of contracting the illness, because there is no physical separation between employees and clients.

Staff fears are not unfounded. It's happened in other homeless shelters in other places. On March 24 public health officials confirmed a second positive test for COVID-19 in Toronto’s shelter system.

“Over the last week, there have been some double shifts while we try to get people properly set up. Because we still have this group of people who have no place to go and it’s even worse now (because of COVID-19),” Woytowich said.

The dilapidated centre is operating over capacity while trying to follow health guidelines and maintain the recommended space between people. This has meant rolling back services and not having enough space to meet demand.

The federal government recommends social distancing, especially from people at higher risk of contracting COVID-19 such as older adults and those in poor health. That describes a large part of the demographic that outreach workers serve.

Keeping the suggested distance of at least two arms lengths from others becomes untenable in a crowded dining area that doubles as a sleeping space.

Meanwhile, the number of people registered to use the facility jumped from 120 to 124 since March of this year. And every additional person makes social distancing more difficult.

“I have 124 people registered for our overnight sleep in. So that’s 124 homeless people that access our services,” Johnson said.

“At the best of times when there’s no crisis and when the world’s not going crazy we can take a maximum of 14 of those people for a night and now we can’t. Now we’ve had to reduce our numbers again because we have to space.”

She said that the overnight shelter program was accessed 230 times in the last four months and is currently averaging eight to ten people per night. Those remaining don’t always have a place to go.

As of December 31st, 2019, the list of extended-hours participants were 20 per cent female to 80 per cent male, with ages ranging from 22 to 66 years old. All but one of them are Indigenous.