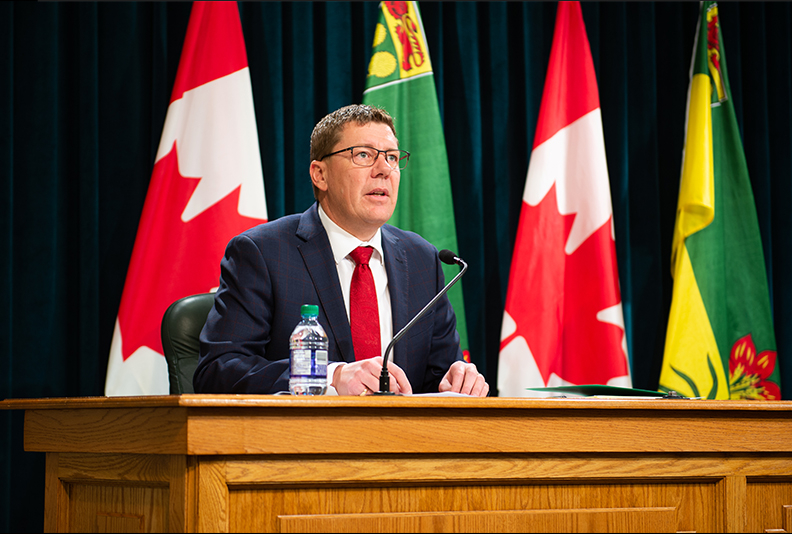 Premier Scott Moe is the first in Canada to announce a plan to reopen the economy amid the COVID-19 pandemic. Photograph courtesy of the Government of Saskatchewan.
Previous story
Next story

“Over the next several weeks, restrictions will be gradually lifted by adding more types of businesses to the allowable businesses list, meaning that they can reopen if they so choose,” Moe said.

With the announcement, Saskatchewan becomes the first province to detail a plan to restart its economy during the COVID-19 pandemic, including set dates for the first two stages.

On May 4, the province will open access to medical services such as dentistry, optometry, physical therapy, podiatry, occupational therapy and chiropractic treatment. And recreational activities and facilities (like fishing, boat launches, golf courses and parks and campgrounds) will be allowed to open with precautionary measures.

“All businesses and public venues will be required to continue following physical distancing and cleaning and disinfection practices to protect both employees and customers. Members of the public will be expected to follow physical-distancing rules and to stay home if they are experiencing any COVID-19 symptoms,” said Moe.

Phase 2 is to start May 19 with the reopening of some retail businesses and personal services, like clothing stores, pawn shops and hairdressers.

A government spokesperson told National Observer the plan will be rolled out the same way across the province, including northern Saskatchewan.

“She continues to be in touch with all municipal leaders across the province and specifically in touch … with those communities where we are working much more closely … from a health-care delivery perspective to ensure that they have the resources from the public safety agency that they may require,” Moe said.

"Where there may be a localized flare-up or anything of that nature, we will be working with those municipalities very closely," Saskatchewan Premier Scott Moe.

“We wouldn’t expect that municipalities would be requesting to move out of step, if you will, with the province. In saying that, where there may be a localized flare-up or anything of that nature, we will be working with those municipalities very closely.”

Moe said he views the move as a collaboration between the province, the chief medical health officer, the Saskatchewan health authority, community leaders and municipalities.

“We had a very open conversation with a number of northern leaders as to (whether we should) shut northern Saskatchewan down,” Moe said.

“The local municipal leadership throughout the north had indicated that they would like to monitor and control the access in and out of their communities from a health-care perspective and we agreed that that is how we would move forward.”

“Whenever you have an outbreak or a cluster, it’s very complex … If there is a localized cluster, it has to be managed in that broad approach,” Shahab said.

“That whole community might need to go under a heightened level of surveillance, which may include increased testing. And … there may have to be some specific regional restrictions that might have to go in effect for a limited period of time that are not in place in the rest of the province, and that I think will be very important as we go forward,” Shahab said.

The premier also addressed the closures of Cameco Corporation's Cigar Lake uranium mine and SSR Mining's Seabee Gold operation among others in the province’s far north.

“We are thankful for the efforts and initiatives that have put in place to keep their employees, whom they value, very much safe. This is another example of the impact this is having on our economy,” said Moe.

“We are an export-based economy. We have uranium, potash, agri-food products, manufactured goods and energy that we provide to the world, and Cameco and others have been very, very proactive in ensuring the safety of their employees in these northern remote camps and locations.”

“It is important to note that the Government of Saskatchewan has been in regular contact with First Nations leaders and northern municipalities to address any concerns raised,” spokesperson Matthew Glover told National Observer in a written response.

“Officials from NITHA, (Northern Inter-Tribal Health Authority), ISC (Indigenous Services Canada) and the Ministry have discussed the needs of First Nations communities, including those in the north, and supply orders. Shipments of supplies to 15 southern First Nations went out April 9 and a delivery to NITHA (Prince Albert office) was scheduled for April 10,” Glover said.

According to the health authority, as of Thursday, the province has five new cases of COVID-19, bringing the total to 331, including one presumptive positive case.

Fifty-seven of the 331 cases are considered active. Nine more people have recovered, bringing the provincial total to 270 recoveries.

There are six COVID-19 patients in hospitals across the province, with one in intensive care.

“In Saskatchewan, our situation is that we have had, for the last couple of weeks, very low infection numbers."

Dates for the third, fourth and fifth stages of the reopening plan have not been announced. Stage 3 will see the gradual reopening of remaining personal services, restaurants, gyms and fitness facilities, licensed establishments and childcare facilities.

The fourth phase will include the reopening of indoor and outdoor recreation and entertainment facilities. Stage 5 involves a gradual return to normal, with restrictions remaining in place in high-risk areas.

The province said reopening access to elective surgeries, diagnostics and other non-essential procedures will be considered separately, with updates on that plan to come.