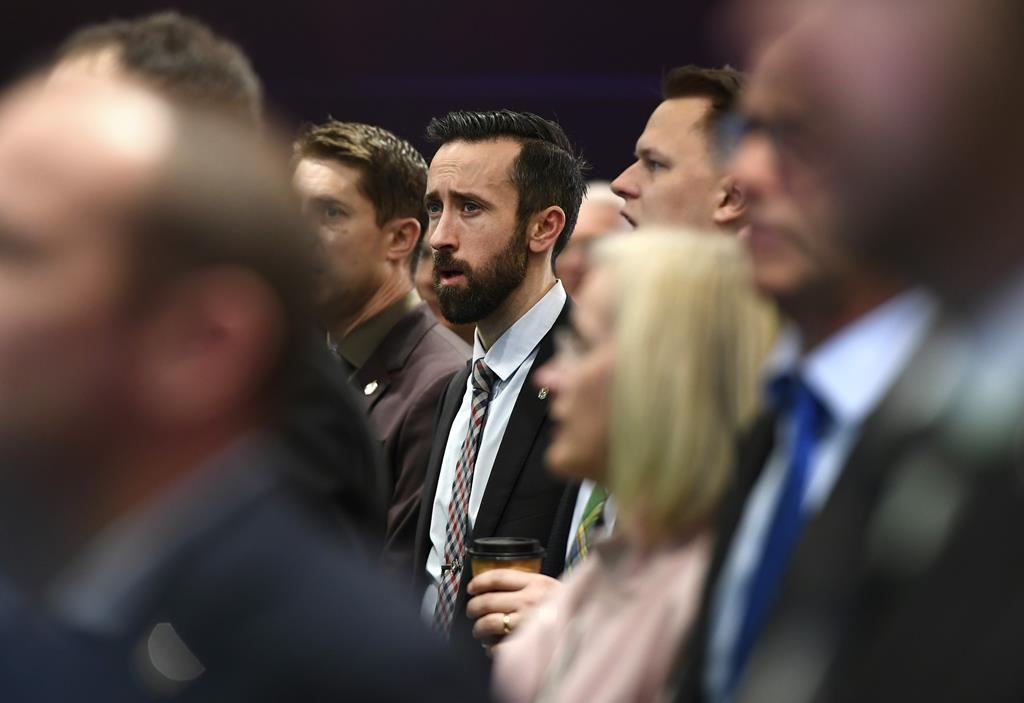 Ontario Conservative MP Derek Sloan held to his leadership campaign slogan of being "Conservative without apology" and refused Wednesday to heed the demands of his fellow MPs to apologize for remarks questioning the loyalty of the country's chief public health officer.

Sloan dug in at the same time as the group organizing the party's leadership race was deciding to resume the contest, but with revisions that will likely see a successor to Andrew Scheer named in late August.

Sloan, the MP for Hastings-Lennox and Addington, is one of four candidates in the race, but his place within the Conservative caucus was challenged this week.

A motion had been put forward by other Conservative MPs from Ontario during a meeting Tuesday afternoon demanding he apologize or retract his comments, two sources told The Canadian Press. Otherwise, some of the very MPs he wants to lead were prepared to try to get him kicked out of caucus, said the sources, who were granted anonymity in order to discuss confidential caucus matters.

But just after the 6 p.m. Eastern time deadline they'd set for him to apologize, Sloan issued a statement suggesting his remarks about Dr. Theresa Tam had been "deliberately" mischaracterized by the Liberals.

Sloan drew national attention late last week when, in an email to supporters, he criticized Tam's handling of the COVID-19 pandemic in Canada, citing her association with and reliance upon data from the World Health Organization.

The WHO has come under scrutiny after it emerged that China, where the outbreak of the novel coronavirus began, potentially underreported the extent of illness in that country, in turn tainting the guidance the UN's health agency was providing to other countries.

Sloan asked whether Tam was working for "China or Canada."

She was born in Hong Kong, and that question prompted accusations that Sloan was being racist in his approach, as challenging someone's loyalty is a historical racist trope.

In his statement Wednesday, Sloan said he never once mentioned Tam's race or sex in his remarks. He said it is obvious she is employed by Canada, not China, and while she is affiliated with the WHO, doesn't work for that agency.

"I am sure that she wants what she thinks is best for Canada," Sloan said.

But Sloan said she is relying on flawed data from the WHO and China, and while ultimately the prime minister is responsible for following her advice, she should still step down for making decisions that have cost Canadian lives.

Sloan was condemned across the political spectrum for his initial remarks, including by some of his fellow MPs who used social media last week to highlight their opposition.

Among them, Conservative Michael Chong. His father immigrated to Canada from Hong Kong.

"While I might not agree with every decision she's made, I've no doubt about her loyalty to Canada," he wrote of Tam on social media.

"We're in this together and each one of us is doing their best."

Chong did not bring forward the motion to kick Sloan out. But it is a piece of legislation that he brought forward several years ago that gives MPs the power to oust one of their own.

The Reform Act, which became law in 2015, gives MPs, and not a party leader, the ability to decide whether a fellow parliamentarian stays or goes.

To remove Sloan, written notice is required from 20 per cent of MPs requesting his membership be reviewed.

Then, a majority must vote to expel him — a vote that must be held by secret ballot.

MPs have been meeting via video or teleconference since the COVID-19 pandemic shut down most in-person gatherings across the country. How a secret ballot could be conducted to oust Sloan is unclear, nor is whether it would pass.

Sloan is one of only two MPs in the running for the leadership. The other is Ontario MP Erin O'Toole. Two sources told The Canadian Press that O'Toole was not in favour of the motion. His campaign did not return a request for comment.

Before the COVID-19 pandemic, the party had planned a convention to declare a new leader on June 27. In March, with the viral outbreak worsening, organizers suspended the official race.

Wednesday night, the group announced the competitors can return to raising funds, and the May 15 deadline to sign up new members remains unchanged.

The balloting is to be conducted by mail, as the Conservative constitution requires, with votes now due by Aug. 21.

"The result will be announced as soon as those ballots can be properly processed and examined by scrutineers while respecting any health guidelines in place at that time," the organizing group said. It hopes to be more specific "in the coming weeks."

Besides Sloan and O'Toole, the other candidates are former MP and cabinet minister Peter MacKay, and Toronto lawyer Leslyn Lewis.

MacKay leads in endorsements from current MPs, and O'Toole and Lewis also have some declared supporters among elected Conservatives.

Sloan and Lewis, however, do both have the backing of the influential socially conservative group Campaign Life Coalition.

The organization circulated an email to its membership Wednesday asking for help to "save" Sloan.

It said a refusal by Scheer, the current leader, to publicly back him, and the fact that other potential leadership candidates were disqualified for controversial comments, does not bode well.