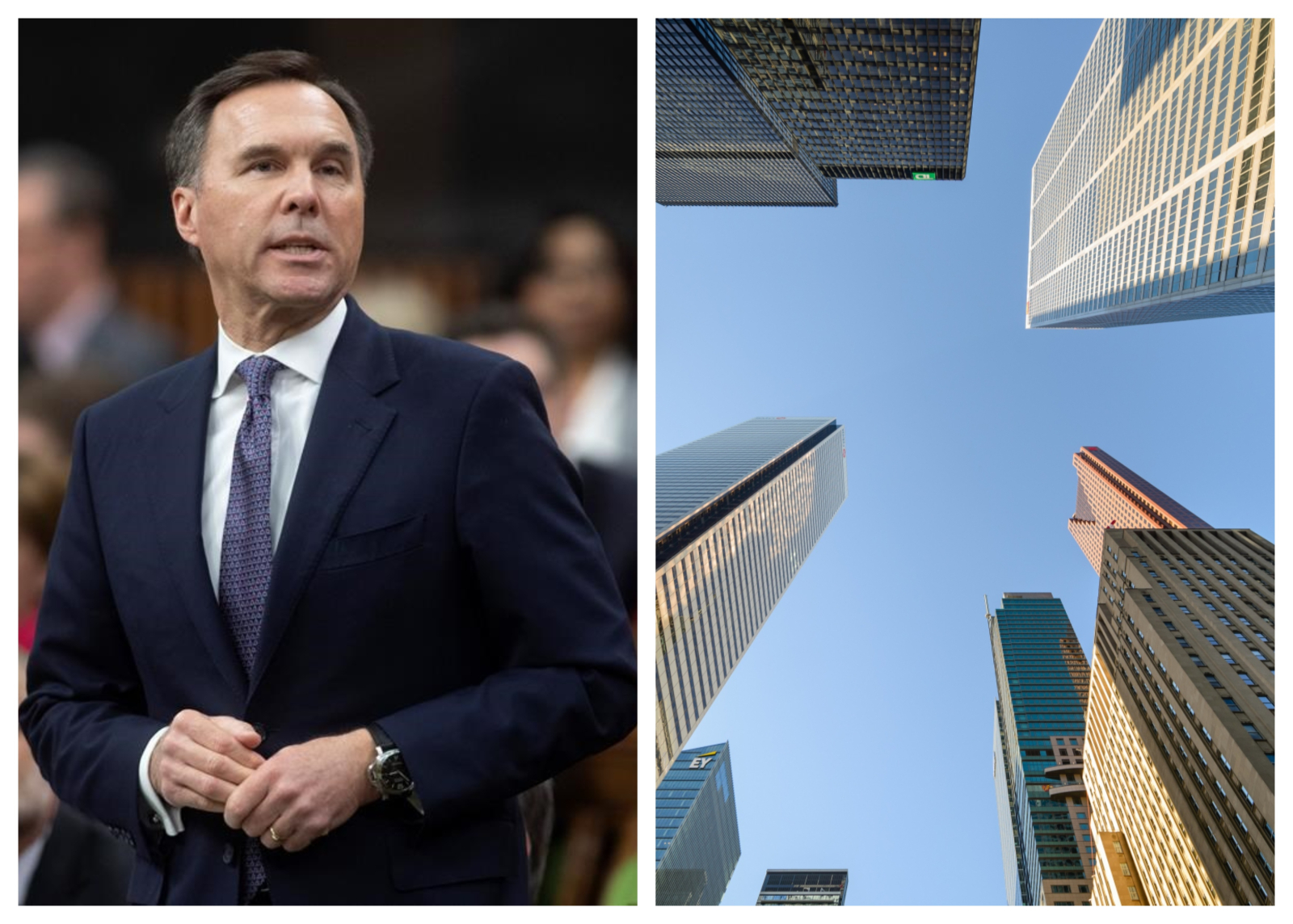 Lobbying of the Federal government was up 60% in March compared to the same month in 2019. File photo of Bill Morneau by The Canadian Press / Adrian Wyld. File photo of Toronto financial buildings
Previous story
Next story

The Trudeau government recently signed an agreement with Amazon to distribute essential medical supplies across Canada in partnership with publicly owned Canada Post and Purolator. Its dependence on Amazon at time of crisis — a corporation with dangerously unsafe workplaces, and an aggressive anti-union history — is troubling. In the last few days, it has fired workers who have spoken out.

Also troubling, Canadian railway giant CP has dragged its feet on the safety of its workers during the crisis. Despite a federal government public health requirement that workers returning from travel abroad self-isolate, CP continued to demand that these workers show up for work. It was only under pressure from the union that CP was forced to "reinterpret" the federal health order and allow its workers to stay home without penalty. Unlike Amazon, CP has a strong union to advocate on behalf of workers.

This revelation coincided with CP’s announcement it paid its six top executives $800,000 in so-called safety bonuses in 2019, despite the fact that six of its employees were killed in accidents in the last two years. Employee cynicism regarding CP’s claim that safety is its number one priority is understandable in the face of such casual greed.

These examples of corporate behaviour reflect an era in which the "free market," or neoliberal paradigm, has dominated the economic policy landscape over the last four decades.

Its essence is captured in former U.S. President Ronald Reagan's famous maxim: "Government is not the solution to our problem, government is the problem." What is the solution: unleash market forces; get government off the back of wealth creators. How to accomplish it: through deregulation, privatization, austerity and untrammeled corporate globalization.

Singularly motivated by costs and shareholder value, devoid of ethical underpinnings, the paradigm has compromised the safety of workers and communities, leading in extreme cases to industrial disasters such as Lac-Mégantic, Westray Mine, listeriosis and Walkerton.

It has funnelled income and wealth upward to the few, spreading insecurity, poverty and suffering amongst the many. It has eroded democracy and thrown the planet into a climate emergency.

The product of corporate hegemony — a corporate coup d’état in slow motion as described by Canadian philosopher John Ralston Saul — government’s countervailing power as custodian of the public good was systematically eroded.

Long-term care facilities — where shocking numbers of residents have died of COVID-19 — were privatized and deregulated by the provinces. Publicly owned Connaught Laboratories, which pioneered treatment for diabetes and played a prominent role in smallpox and polio vaccines, was sold off to a French pharmaceutical multinational, its Canadian remnant deprived of its former research capacity.

The Trudeau government’s recently created Canada Infrastructure Bank has morphed into a public-private partnership with Wall Street financiers, increasing costs to taxpayers and the risk of public infrastructure falling into private hands.

"While the corporate practices have been marginally reined in during this pandemic, their DNA remains unchanged. Corporate power, and the architecture of persuasion that sustains it, will still be in place when the crisis ends."

The pandemic has dramatically shifted the terrain, suspending for now the neoliberal framework. Criticism of massive fiscal stimulus has practically disappeared from policy discourse, as has the Bank of Canada’s unprecedented engagement in quantitative easing. Government is firmly in control, mobilizing resources to stem the spread of the virus; ensuring essential medical equipment for patients and protection for front-line workers; shoring up a tanking economy; and supporting workers and businesses facing financial collapse.

Reagan’s aphorism has been inverted: "Government is not the problem; it is the solution to our problem."

While the corporate practices have been marginally reined in during this pandemic, their DNA remains unchanged. Corporate power, and the architecture of persuasion that sustains it, will still be in place when the crisis ends. Big Business will not cede its place willingly. Contrary to expectations, the dominant paradigm weathered the 2008 financial crisis unscathed.

Already, there is evidence of corporate jockeying to maintain its ideological hegemony going forward. A secret memo to federal government ministers from the Canadian Association of Petroleum Producers — leaked to Environmental Defense — reveals the oil and gas industry is seizing advantage of the crisis to pressure the government to grant it exemptions from safety and environmental laws and regulations. Its proposed rollbacks would put Canadians’ health and safety at risk, and guarantee Canada’s inability to meet its climate change targets. This cynical ploy echoes right-wing economist Milton Friedman’s famous dictum: “Never let a good crisis go to waste.”

There are three possible scenarios going forward: status quo ante, marginal adjustments, or transformation to a new model for managing our economy — one that integrates values of empathy, equality, democracy and sustainability; that rebalances public and corporate power and the ideology that perpetuates it.

The first two scenarios will play out at our peril. In the words of Leonard Cohen: “I've seen the future, brother. It is murder.” The next crisis barrelling down upon us is the climate catastrophe, which unlike coronavirus, will end with either the extinction of the human species, or our collective survival by transitioning to a carbon-free world.

Which of these possible futures will prevail?

The coronavirus crisis is having a profound consciousness-raising effect on our society in terms of the urgency of addressing global threats. The notion of community and collective action has come to the forefront. Canadians have a long history of supporting public enterprise, publicly funded services and regulating markets. Public trust in government leadership, blemished in recent times, is being restored, especially when compared with the disastrous scenario playing out south of the border.

Will Canadian governments take the lead in forging an economic paradigm shift going forward? Not without a major push from its citizenry.

The immediacy of the pandemic — in contrast to a “down the road” climate crisis, which allows deniers to sow doubt and delay — could be the wake-up call that gives rise to broad-based popular movements that will demand our governments rise to the challenge.

"the 'free market,' or neoliberal paradigm"
"The pandemic has dramatically shifted the terrain, suspending for now the neoliberal framework. Criticism of massive fiscal stimulus has practically disappeared from policy discourse."

"Its essence is captured in former U.S. President Ronald Reagan's famous maxim: 'Government is not the solution to our problem, government is the problem.'"
That's not what they say when the market goes south. In 2020, industry and big corporations vociferously demand govt support. The height of hypocrisy.
For Reagan and his ilk, govt for the people is the problem. Govt for corporations is the solution.

Neoliberalism is an extreme form of capitalism wherein "government pursues policies for the benefit of markets not people". Neoliberalism puts government at the service of the market. Under neoliberalism, the main purpose of govt is to enable markets. Neoliberalism compels govts to support the market at all costs.
Basically, hands off corporate power except when the financial wizards mess up and the market fails.

"Already, there is evidence

"Already, there is evidence of corporate jockeying to maintain its ideological hegemony going forward. A secret memo to federal government ministers from the Canadian Association of Petroleum Producers — leaked to Environmental Defense — reveals the oil and gas industry is seizing advantage of the crisis to pressure the government to grant it exemptions from safety and environmental laws and regulations."

Nothing new.
CAPP's environmental agenda is unchanged since the Harper era:
• Cut back on research and information-gathering. What we doesn't know won't hurt us.
• Download the costs of cleanup onto the public purse, future generations, and the environment.
• Privatize the profits, socialize the costs. Let corporations walk away. Stick the public with the cleanup tab.
• Out of sight, out of mind. If people aren't living nearby, no need to clean up contaminated sites. If First Nations are nearby, never mind.
• Leave our children with a massive environmental and public health deficit.

["The Harper govt became its own worst enemy in the energy world in 2012. That’s when it bent over backward to accommodate the oil and gas lobby— who were complaining that too much red tape was tying up approval of pipelines and other energy infrastructure projects. The red tape was costing the oil industry money and they wanted it removed.]
"Happy to oblige, Harper's team introduced two omnibus bills— the so-called "budget bills" C-38 and C-45—that incorporated hundreds of pages of legal changes repealing or amending many federal environmental laws.
"… The changes included replacing the Canadian Environmental Assessment Act with weaker legislation, scrapping over 3,000 environmental reviews in the process; gutting the Fisheries Act by weakening fish habitat protection, removing protection for most non-commercial fish species and broadening the govt’s powers to allow harm to fish and fish habitat.
"Other key changes included handing environmental oversight of major energy and pipeline projects to the National Energy Board (NEB); and lifting legal protection to over 99% of Canada’s lakes and rivers by changing the Navigable Waters Protection Act to, tellingly, the "Navigation Protection Act"— shifting the focus of the law away from protecting water to protecting transport."
Fisheries and Oceans Minister Keith Ashfield (2012): "…the amended Fisheries Act will provide flexibility and establish new tools to authorize deposits of deleterious substances."
"How Big Oil lobbied itself out of its biggest projects" (National Observer, 24 Nov 2015)
• www.nationalobserver.com/2015/11/24/news/how-big-oil-lobbied-itself-out-...

CAAP's contempt for the environment and for Canadians whose health and economic well-being depend on it is shining through.

An author always loses me on

An author always loses me on climate when they speak of "extinction of the human species". End-of-civilization-as-we-know-it, yes. But any species that scraped through the last ice age isn't going to die to the last couple from climate change. Isn't "end of civilization as we know it, including billions dead", ENOUGH for you guys? Dial the rhetoric down from 10 to 9, please...

And as for the "whole new world" wish, it's very unlikely. Tweaks are many times more likely. Even Roosevelt's New Deal was a few very large tweaks, but the same basic economic paradigm. Despite how horrible the first world war was, the Versailles Conference ended it by setting up basically the same kind of international order, the League of Nations was a joke, and we got WW2.

Now if we could get a SECOND pandemic in one lifetime, that one might finally bring about major structural change, the way WW2 and nukes brought about a truly new attitude towards war.