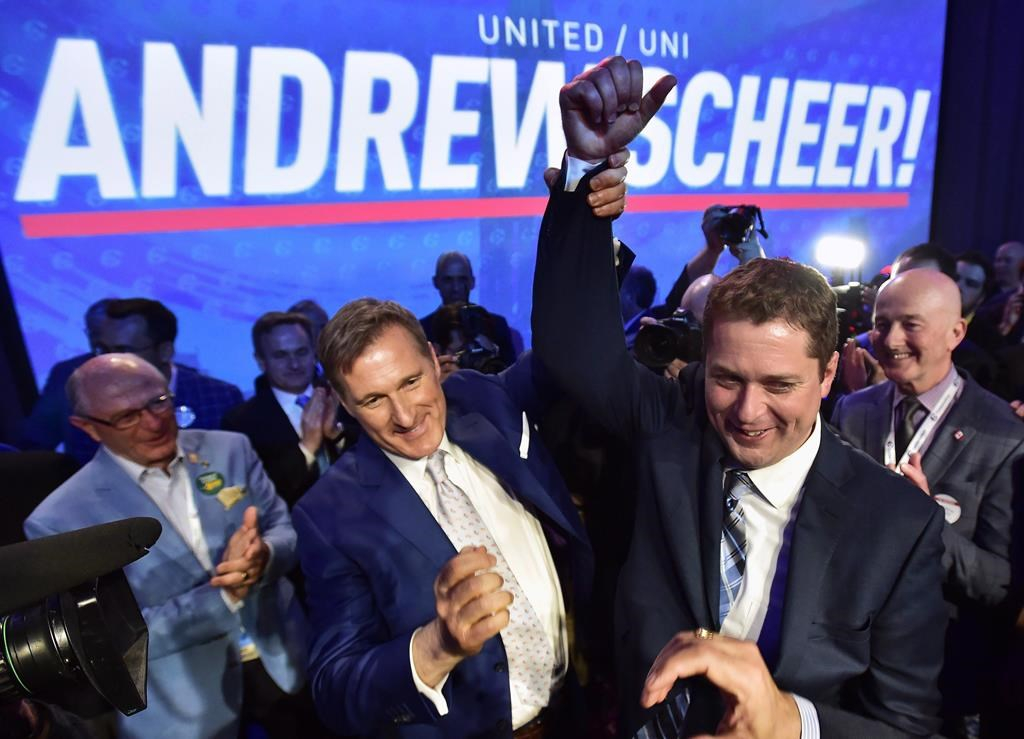 MacKay raised over a million dollars in the first quarter of 2020, but O'Toole had more donors.

MacKay announced on March 5 that he'd hit the million-dollar mark. An analysis of the data published by Elections Canada suggests that as of that date, roughly $838,000 in donations had been received by the party.

He had the wind taken out of his sails that day, however, by an announcement that conservative heavyweight Jason Kenney was endorsing O'Toole.

The endorsement from the Alberta premier and former federal minister seemed to give a financial bump to the O'Toole campaign.

The Conservative party stopped accepting campaign donations at the end of March when it froze the leadership contest due to the COVID-19 pandemic.

O'Toole trumpeted the total in an email to supporters later Thursday, though he said his campaign had raised $361,000 in that time. (The numbers might not match due to reporting delays.) He also suggested MacKay's campaign only raised $45,000 in that period.

Less than hour after he told supporters on a campaign call he was going to continue to take the "high road", he accused O'Toole of being a liar, pointing to the full data in the Elections Canada report about how much he raised in March.

He called O'Toole a good friend in the past and said he used to believe his motivations were positive.

"Erin O'Toole has said a lot of untrue and disappointing things during this leadership race and made a lot of accusations that I think, frankly, are beneath him," MacKay wrote.

The Elections Canada data was released just as the candidates were preparing to dust off their fundraising plans as the race to replace Andrew Scheer officially resumed.

Contest organizers have now set Aug. 21 as the date to have all the ballots back from party members. They must be signed up by May 15 to be eligible to vote.

Leadership organizing committee co-chair Dan Nowlan said no firm date has been set to reveal the winner but he expects it will be a matter of days, not weeks, after the Aug. 21 deadline.

"The majority view on the committee is to have a permanent leader in place as quickly as possible," Nowlan said.

One thing is near certain, he said: the big reveal of the winner won't be in a convention centre packed with hundreds of eager party members, as distancing restrictions to slow the spread of COVID-19 are likely to still be in play.

The party was going to name the new leader on June 27 at a convention in Toronto, but the COVID-19 pandemic forced a delay.

Bans on mass gatherings were one problem, but other issues included how to organize the counting of ballots in person in a way that respected health guidelines, potential backlogs in the mail — the party's constitution requires a mail-in ballot — and how to ensure, given both those things, there was enough time for all the other logistics required to run the vote.

Those challenges remain, Nowlan said, but the Aug. 21 deadline gives the party enough time to figure it all out, especially as some jurisdictions begin to ease up on their COVID-19 restrictions.

When the party froze fundraising, it also asked candidates to refrain from contacting members. However, all four have held virtual town halls, made calls and continued to send out letters, post videos and roll out policy ideas.

All that is expected to ramp up. In an email to supporters Thursday, MacKay also made reference to getting back on the road to meet people in person.

Nowlan said the race organizing committee has not banned candidates from doing so, but trusts they'll comply with local health restrictions on gatherings.

The party is also exploring how to hold virtual debates.

Overall, the Conservatives maintained their long-held position as fundraising champions in the first part of 2020. The party raised just under $1 million more than the governing Liberals, who pulled in nearly $2.9 million in the first three months of the year from 27,224 donors.

The pandemic has forced all parties to cease in-person fundraising events since early to mid-March.