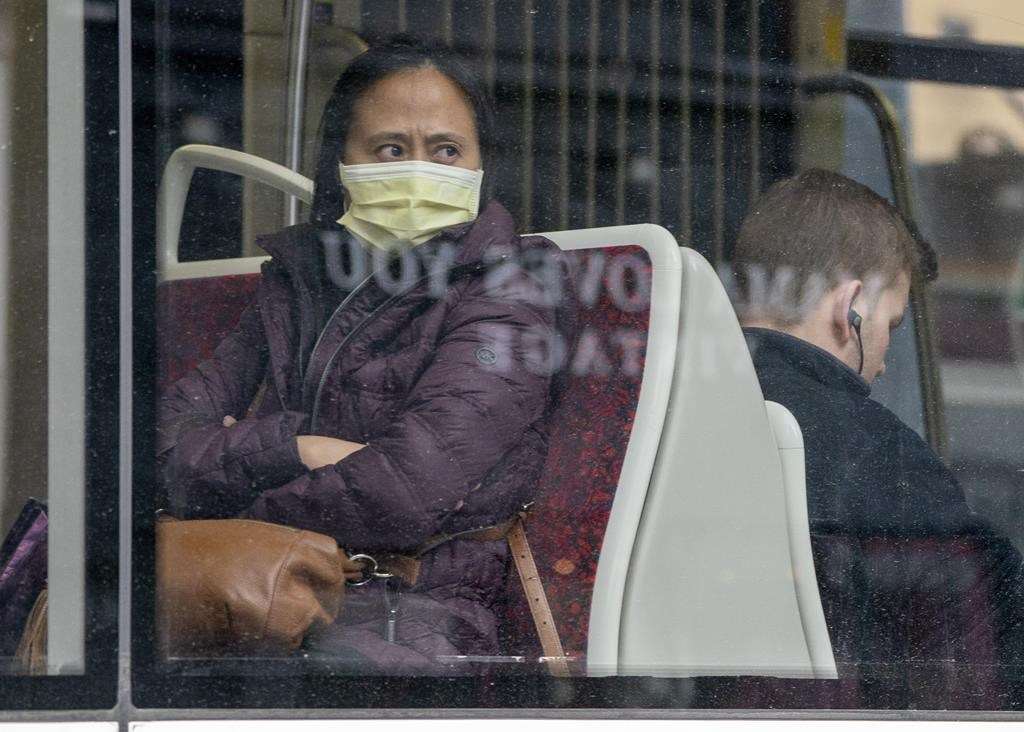 A woman wears a mask as she rides a TTC streetcar in Toronto on March 20, 2020. The gradual reopening of Canada's economy will not mean business as usual for the country's public transit agencies. File photo by The Canadian Press/Frank Gunn
Previous story
Next story

The gradual reopening of Canada's economy will not mean business as usual for the country's public transit agencies.

Despite the fact that a slowly growing number of workers will make their way back to the country's buses, streetcars and subways as they return to workplaces shuttered by the COVID-19 pandemic, the systems that will help get them there say they anticipate maintaining measures that took effect while most of their riders were in lockdown.

Reduced service levels, limited seating and enhanced cleaning protocols will still be in place, several transit agencies said, acknowledging that even more steps may come into play over time but declining to offer details.

Aikins said most of the more than 40 pandemic-related measures implemented since the beginning of the year will remain in effect. Riders returning to Go Transit after their enforced hiatus will find their commutes looking different, she said, noting trains and buses now have hand sanitizer dispensers on board and drivers seated behind protective shields.

Several seats have been blocked off in the interest of both protecting Metrolinx staff and encouraging passengers to maintain the standard physical distancing barrier of two metres, she said.

Those commuters still making use of Go services have not struggled to find seats, Aikins said, noting ridership has plunged 90 per cent since widespread shutdowns took effect in mid-March.

The decline meant Go was forced to scale back its services to 50 per cent of typical capacity, but Aikins said Metrolinx tailored remaining routes to align with hospital shift changes, grocery store hours and other scheduling constraints in play for the essential workers still making a daily commute.

The disparity between ridership and service levels, she said, means Go Transit has room to adjust to the gradual increase of traffic expected when Ontario's economy begins to reopen in the coming weeks.

Similar conversations are taking place at the Toronto Transit Commission, according to spokesman Stuart Green.

The transit provider, which temporarily laid off 1,200 employees amid an 85 per cent drop in ridership, is still running between 70 to 80 per cent of its usual routes in a bid to accommodate essential workers and those reliant on public transit for crucial errands and medical visits.

Green said those workers will start gradually returning as passengers find their way back onto public transit, but said several challenges remain as the TTC tries to find ways of maintaining both operations and public safety.

"It's very much a balancing act," Green said. "It's one of continuing to provide service for people who need it now and being able to accommodate people as they start coming back assuming that there may be certain requirements around physical distancing that we'll have to keep in mind."

Some of those requirements were spelled out in guidelines released earlier this week by Ontario's Health and Safety Association. The recommendations pertaining to transit employers have already been largely implemented at Metrolinx and the TTC, according to their respective spokespeople.

Ottawa's transit provider, OCTranspo, issued a statement saying it would be guided by industry best practices.

"OCTranspo will be ready to adapt the way we provide transit services to meet customer demand and will consult with public health officials as recovery plans evolve in order to provide a safe environment for our customers and employees," transit customer systems and planning director Pat Scrimgeour said, without providing further details.

Similar approaches are unfolding in parts of the country whose return to pre-pandemic norms seems more imminent.

Demands on local transit systems will likely increase in Alberta beginning as early as Monday when most health services in the province are allowed to resume. Retailers and personal services will be allowed to start opening their doors 10 days later on May 14.

In Winnipeg, where some businesses will reopen effective Monday, City Emergency Operation Centre Manager Jay Shaw said buses will continue to run on a reduced schedule, adding more vehicles if physical distancing is becoming too difficult to enforce with existing resources.

Such concerns are on the minds of transit employees, according to the union representing TTC workers.

But he said more proactive steps will be needed to ensure employee health as transit operations gradually ramp up.

"I think what they're going to have to start doing is putting in markers at stations and putting markers on platforms ... just like they have in other cities in the world that have started to reopen," Santos said.

International examples could serve Canada's transit systems well in the months ahead, according to one industry observer.

Amer Shalaby, professor of transportation engineering at the University of Toronto, said countries further ahead in the COVID-19 recovery process have implemented a variety of measures to keep transit safe for all.

He said authorities in South Korea clean and sanitize mass transit vehicles up to five times a day.

In the Netherlands, meanwhile, he said the government is developing a mobile app that will help manage crowds by allowing riders to make reservations on local buses and trains. Such a system, he said, also allows services to be prioritized for essential workers and those without alternative means of transportation.

But regardless of how Canada's transit operators proceed in the post-pandemic world, he said governments should be prepared to help keep them afloat.

"Until a vaccine or treatment for COVID-19 is found, transit agencies will have to run at very high capacity, but ridership will be low and revenues will be low," he said. "That difference really has to be covered by someone."