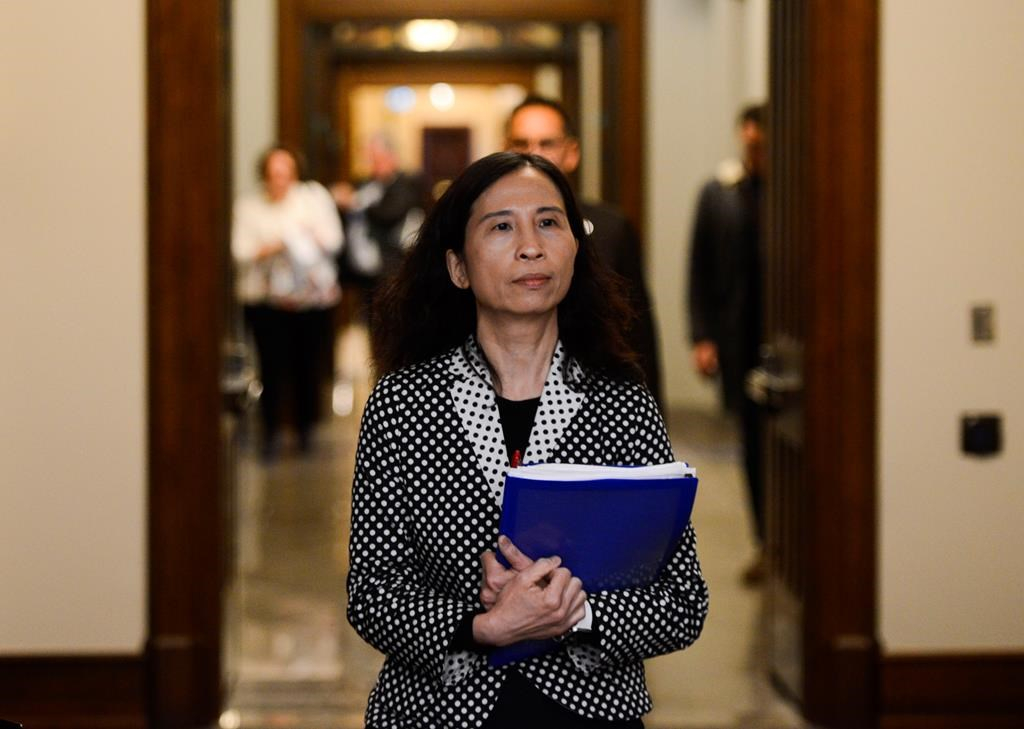 Dr. Theresa Tam, Canada's Chief Public Health Officer, arrives at a press conference on Parliament Hill during the COVID-19 pandemic in Ottawa on Monday, May 4, 2020. Photo by The Canadian Press/Sean Kilpatrick
Previous story
Next story

Canada is keeping a safe distance — for now — from the theory that the COVID-19 outbreak began by accident in a virology laboratory in China — a narrative that's gaining traction by the day, thanks to the White House, American intelligence agencies and media outlets friendly to President Donald Trump.

It will be important to one day learn the true origin story of the global pandemic to defend against similar outbreaks in the future, Health Minister Patty Hajdu acknowledged Monday.

But for now, she said, the federal government is focused the health and safety of its citizens.

"There will be time and a lot of interest and importance (in understanding) how this virus became prevalent in the human species," Hajdu told a news conference.

"Although those questions are important, because they will help us prevent future outbreaks and understand what we can learn from this particular virus, what's even more important right now is to stay focused on Canadians' health and helping Canadians get through the outbreak that we're in now."

The theory — that the virus came from a Level 4 microbiology facility at the Wuhan Institute of Virology, in the same city where the outbreak originated last December — has been making the rounds in blog posts, social-media missives and conspiracy-theory Reddit threads for months, long before COVID-19 became a household name.

But Trump, beset by electoral anxiety and his hot-and-cold relationship with China, has given it new life, aided by credulous media reports and an intelligence community now willing to give it credence, all at a time when clear answers about the worst global health crisis in a century are in maddeningly short supply.

"We're going to be given a very strong report as to exactly what we think happened, and I think it'll be very conclusive," Trump said Sunday during a Fox News town hall from the Lincoln Memorial.

"My opinion is they made a mistake. They tried to cover it. They tried to put it out. It's like a fire. You know, it's really like trying to put out a fire. They couldn't put out the fire."

Earlier in the day, Secretary of State Mike Pompeo was even more direct.

"There's enormous evidence that that's where this began," Pompeo said in an interview on ABC's politics show "This Week." "While the intelligence community continues to do its work, they should continue to do that and verify so that we are certain. I can tell you that there is a significant amount of evidence that this came from that laboratory in Wuhan."

All of that followed a remarkable statement last week from the Office of the Director of National Intelligence, which said U.S. agencies were actively investigating "whether the outbreak began through contact with infected animals or if it was the result of an accident at a laboratory in Wuhan."

It added, importantly: the U.S. agrees with the "wide scientific consensus" that the virus is neither man-made nor genetically modified.

Still, the notion of the lab being the source of the pandemic — a tempting one, given the lab's relative proximity to the so-called "wet markets" for food and animals long presumed to be ground zero — dovetails nicely with Trump's blame-China narrative, which has been buttressed by credible reports that the country waited until it was too late to tell the world about the danger it faced.

Dr. Theresa Tam, Canada's chief public health officer, said she's not seen any specific evidence to point to the lab as the culprit, but she acknowledged the world has more questions than answers at this point about outbreak's true origins.

"I don't think we've seen any specific information to say this is a laboratory accident or release, but at the same time we don't know the exact origins of this virus," Tam said.

Though the novel coronavirus is widely believed to have originated with bats, a different animal would likely have had to be involved as an "intermediate host" to allow the virus to jump to humans, she noted. The identity of a likely host hasn't been confirmed, but preliminary research has pointed to snakes as well as pangolins, scaly, nocturnal creatures that live in Asia and Africa.

"The natural history, the evolution of the virus may be found in the upcoming months, but sometimes you may actually not find that until many months later."

A Fox News report Sunday, citing anonymous senior U.S. officials, pointed to a research dossier by the Five Eyes intelligence alliance — the U.S., Canada, the U.K., Australia and New Zealand — that accuses China of hiding or destroying evidence, and suggests a strong majority of U.S. agencies believe the virus came from a lab.

Prime Minister Justin Trudeau, when asked whether Canada had formed an opinion based on what it has learned through the Five Eyes, demurred.

"At this point," he said Sunday, "we are not drawing any firm conclusions."

This report by The Canadian Press was first published May 4, 2020.