By Nicole Thompson | News, Politics
#483 of 1611 articles from the Special Report: Coronavirus in Canada 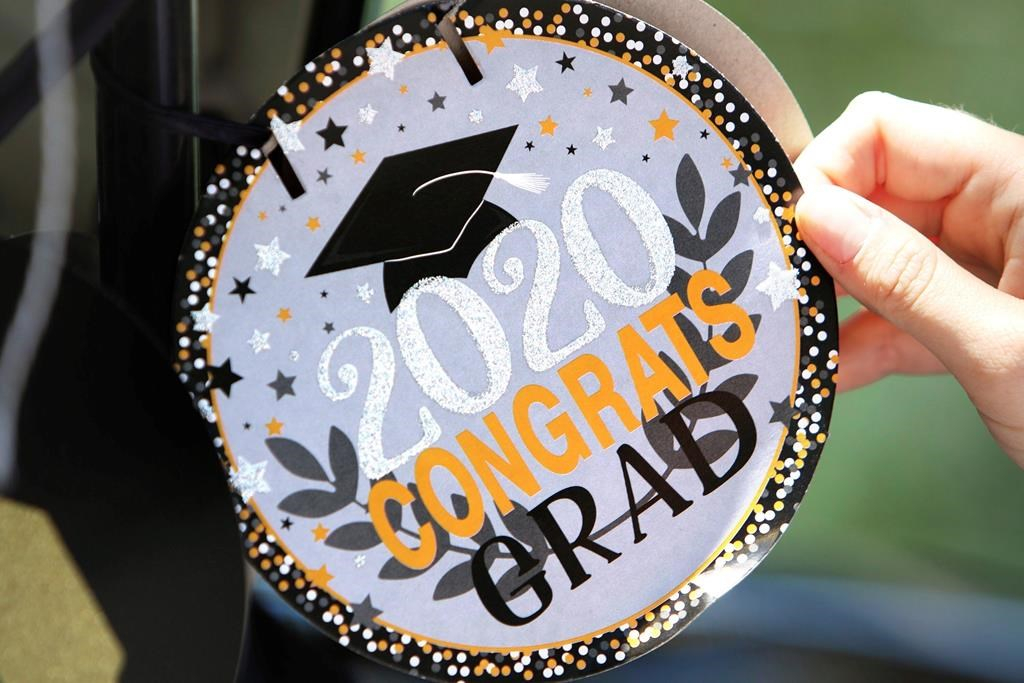 A graduation decoration is shown in Tampa, Fla., on Friday, May 1, 2020. File photo by Douglas R. Clifford/Tampa Bay Times via AP
Previous story
Next story

Urmila Persaud spent months picturing herself walking across a stage to collect her high-school diploma in front of friends and family.

But the COVID-19 pandemic has replaced that vision with a big question mark as schools and boards across Canada grapple with how to handle graduation ceremonies because of COVID-19 restrictions.

For soon-to-be graduates like Persaud, this typically joyous milestone is fraught with uncertainty about whether they'll get a chance to celebrate the end of their high school chapter, and the murky future that lies ahead.

"I imagined and dreamed about my graduation for months," the 17-year-old from Richmond Hill, Ont., said. "And before March break, I had no idea that might be the last time I see my class in person."

It's not just graduation — Persaud had imagined moving into a dorm and starting university come September, but that picture has been supplanted by questions about whether she'll have to take her first post-secondary courses online from her parents' home.

But the ceremony is a particular sore spot — a final hurrah with her tight-knit class of just 17 students.

"We pretty much grew up together," she said. "Our graduation would be our last time together — all together — in person. And now that might not happen."

The French-language board to which Persaud's school belongs cancelled graduation dances but has yet to make a formal decree on graduation ceremonies, a spokeswoman said.

A spokeswoman for Ontario's education minister said a decision on such ceremonies would be left with the school boards, and the province's largest — the Toronto District School Board — announced Friday that all of its graduation ceremonies would be either cancelled or postponed "until at least the end of the school year."

"As there are still many unknowns, the rescheduling of postponed events will be handled at the school level, depending on local circumstances," reads a letter to parents from TDSB director of education John Malloy.

In Prince Edward Island, meanwhile, Education Minister Brad Trivers said graduation ceremonies at the province's 15 secondary schools will be held the week of June 22, along with other end-of-year activities.

And a spokeswoman said that if commencement ceremonies in New Brunswicks go ahead, they will be different than usual as the Department of Education looks for "positive alternatives to traditional graduation ceremonies that would meet the restrictions recommended by Public Health."

So too for 17-year-old Trinity Parchment of Barrie, Ont., who learned on Friday that her school wouldn't be holding a graduation ceremony, but would try to do something to mark the occasion online.

"But it just takes away the whole idea," she said. "My friends and I were planning on decorating our caps and just making it a whole thing. It's really upsetting. It's like one moment, you're just getting an extra long March break. And then the next moment, everything's cancelled."

Parchment said that while her grades have gone up since classes moved online — something she attributes to a lack of distractions — the school experience has gotten far harder.

"I don't get to wake up and have purpose. You know what I mean?" she said. "Like, I don't wake up excited for something new, excited to see my friends. I just wake up to wake up, and it's sad."

This report by The Canadian Press was first published May 3, 2020.