So what does Harvard's ‘net-zero’ pledge mean? 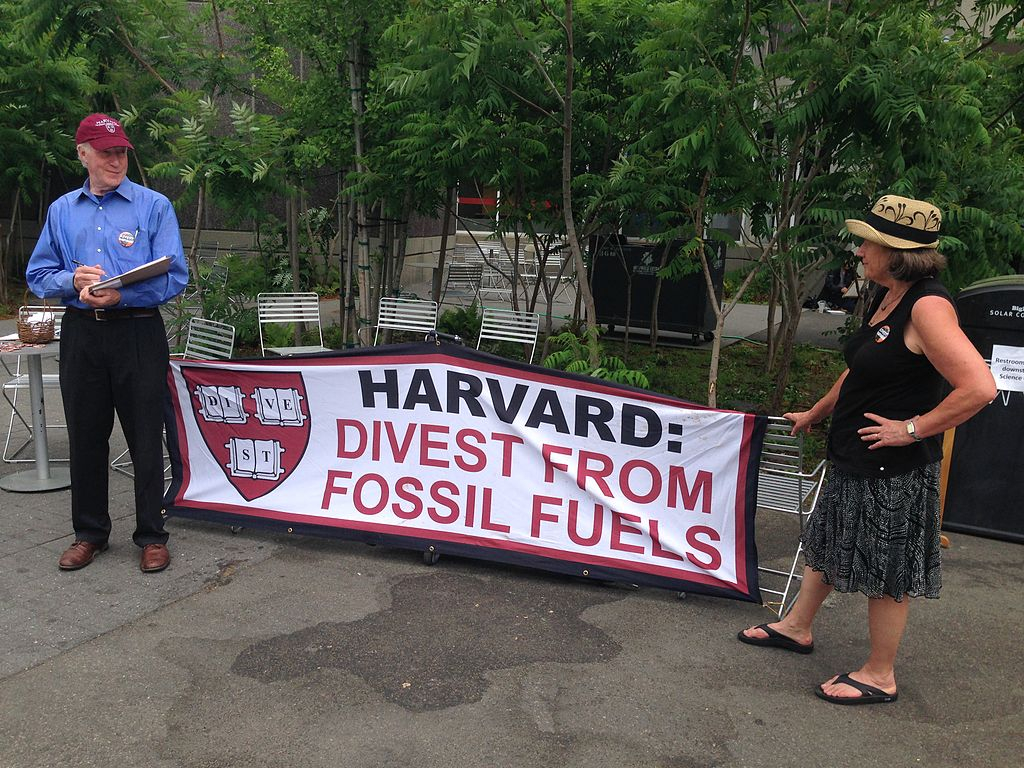 In the lead-up to Earth Day, two wealthy, world-renowned universities made historic decisions about their relationships with fossil fuel companies and commitments to tackling climate change. Oxford passed a motion to divest its endowment from fossil fuels. Harvard, meanwhile, decided to skirt divestment in favor of a plan to “set the Harvard endowment on a path to achieve net-zero greenhouse gas (GHG) emissions by 2050.”

Harvard’s announcement was both mildly celebrated and highly criticized by divestment advocates on campus and beyond, who have put increased pressure on the administration to divest over the last six months. In November, student activists joined their counterparts at Yale to storm the field in protest at the annual Harvard-Yale football game, disrupting the match for more than an hour. In February, the Faculty of Arts and Sciences voted 179-20 in favor of a resolution asking the school to stop investing in companies that are developing new fossil fuel reserves. And a student and alumni climate group collected enough signatures earlier this year to nominate five candidates to the university’s Board of Overseers, which has a say in who manages the endowment, which was valued at $40.9 billion last year.

In a letter explaining the net-zero portfolio plan to faculty, University President Lawrence Bacow said that divestment “paints with too broad a brush” and vowed to work with fossil fuel companies rather than demonize them. “The strategy we plan to pursue focuses on reducing the demand for fossil fuels, not just the supply,” Bacow wrote. The school says its commitment matches the decarbonization timeline set by the Paris Agreement — but it’s not yet clear what it will entail, and whether the school will be able to fulfill it.

Net-zero emissions promises can mean different things, and in many cases, the entities making the promises haven’t figured out how to make good on them. BP’s net-zero pledge accounts for the emissions from some, but not all, of the fossil fuel products it sells to the world, also known as its scope 3 emissions. Repsol, one of the first oil and gas majors to announce a net-zero target, has a plan that relies on technologies like carbon capture that the company has admitted aren’t viable yet. Even entities with more ambitious and transparent plans, like New York State, haven’t stopped letting utilities invest hundreds of millions in new natural gas infrastructure.

Despite these discrepancies, the concept of achieving net-zero for a company that sells products or a state that consumes energy is relatively tangible: They can invest in renewables, incentivize energy efficiency programs and electrification, try to pull carbon out of the atmosphere. But how do you reduce — or even measure — the carbon footprint of an endowment, which in Harvard’s case is made up of more than 13,000 different funds?

“I think the idea is, at the end of the day, all the companies in the portfolio would be net-zero,” said Georges Dyer, executive director of the Intentional Endowments Network, a nonprofit that helps endowed institutions make their investments more sustainable. While he doesn’t advocate for or against divestment or any other specific strategy, Dyer pointed out that Harvard’s net-zero target has the potential to address the climate crisis across the whole economy, including real estate and natural resources, and not just the fossil fuel sector.

A net-zero portfolio won’t be as simple as only investing in companies with net-zero pledges, since different companies have different definitions of net-zero. Indeed, in his letter to faculty, Bacow admitted that Harvard was not yet sure how it would measure or reduce the endowment’s footprint, explaining the plan would require “developing sophisticated new methods” for both. In a statement shared with Grist, the Harvard Management Company, which manages the endowment, said it would work to “understand and influence” each company’s “exposure to, and planned mitigation of, climate-related risks.” It plans to develop interim emissions targets to ensure success.

Harvard isn’t alone in trying to figure this out. The Net-Zero Asset Owner Alliance is a group of institutional investors that was formed at the United Nations Climate Summit last fall. Its members have committed to net-zero investment portfolios by 2050, promising to set interim emissions targets in five-year increments and to issue progress reports along the way. But the group is still looking for answers on how to actually accomplish these goals.

In vowing to work with fossil fuel companies, Harvard’s commitment relies, to a certain degree, on shareholder engagement, a strategy that has seen mixed results thus far. Timothy Smith, director of ESG (environmental, social, and governance) shareowner engagement at Boston Walden Trust, an investing firm, told Grist that investors have made real gains in changing companies’ behavior, attitudes, and policies around climate. He pointed to companies like BP that have not only set net-zero targets but also said they will withdraw from trade associations that have lobbied against climate policy.

Harvard didn’t divest from fossil fuels. So what does its ‘net-zero’ pledge mean?

“I’m not saying we’re moving far enough fast enough,” he said. “We are not.” Smith acknowledged there have been some failures, notably with Exxon, which has lagged far behind its peers in climate action. Last year, Exxon successfully blocked a shareholder resolution that would have forced it to align its greenhouse gas targets with the Paris Agreement.

Shareholder engagement is not a new tack for Harvard: In September, it joined Climate Action 100+, an investor-led initiative pressuring oil and gas companies to curb emissions and disclose climate risk. But most of Harvard’s funds are managed externally, so its ability to participate directly in shareholder initiatives is limited. Instead, it provides “proxy voting guidelines” to its financial managers. Harvard’s voting guidelines for climate change generally instruct managers to vote in support of resolutions that request that companies assess impacts and risks related to climate change. Other institutional investors have taken a more active stance — the Church of England and the New York State public pension fund, for instance, recently said they will vote against reelecting Exxon’s entire board since it has failed to take action on climate change, as well as filed a resolution asking Exxon to disclose its lobbying activities.

To be clear, no one is implying Harvard should engage with Exxon, since it’s actually unclear whether Harvard has any investment in Exxon. The school only discloses its direct investments — about 1 percent of the total endowment — as required by the Securities and Exchange Commission. The rest of the school’s portfolio, as well as how much of it is invested in fossil fuels, remains shrouded in secrecy. An analysis of Harvard’s 2019 SEC filing by the student activist group Divest Harvard found that of the $394 million disclosed, about $5.6 million was invested in companies that extract oil, gas, and coal and utilities that burn these fuels.

The Harvard Management Company told Grist that it will report its progress toward the net-zero goal annually, with the first report to be released toward the end of this year, but it did not say whether it will disclose its fossil fuel investments.

Harvard’s success will depend, to a large extent, on transparent reporting from the companies it invests in. As part of its new commitment, Harvard announced its support for the Task Force on Climate-related Financial Disclosures, a financial industry group that makes recommendations for how companies should report their climate-related risks to investors.

This piece is significant, as navigating the financial risks of the impending energy transition is likely a key motivating factor in Harvard’s decision to go “net-zero.” Bob Litterman, a financial risk expert and carbon tax advocate, said this means distinguishing between companies that are well-positioned for the rapid transition to a low-carbon economy — aka a world where policy decisions make emitting carbon a costly endeavor — and those that are not.

“I have heard a number of investors talk about aligning their portfolios with net-zero emissions by 2050,” said Litterman. “You know, it’s not entirely clear what that means, but if what it means is that they’re trying to position their portfolio to do well in that scenario, that makes sense to me.”

But for divestment advocates, maximizing returns is beside the point. In an op-ed for the Crimson, the campus paper, alumnus Craig S. Altemose criticized Harvard’s net-zero plan for ignoring the question of responsibility for the climate crisis and the fossil fuel industry’s track record of spreading disinformation and lobbying against climate policies. He also argued that the plan is not aggressive enough to meaningfully help the world avoid the worst effects of climate change.

In a Medium post, the group Divest Harvard argued that “a good-faith effort to reach carbon neutrality would have acknowledged that divestment is the logical first step.” Oxford University ran with that concept: After its initial announcement to divest, Oxford instructed its endowment managers work toward net-zero across the rest of its portfolio.

Across the spectrum, divestment advocates and sustainable investing experts agree that Harvard’s net-zero endowment pledge represents a step forward. But how big a step? In an interview with the Harvard Gazette, Bacow framed the entire initiative in dubious terms, saying, “If we are successful, we will reduce the carbon footprint of our entire investment portfolio and achieve net-zero greenhouse-gas emissions.” Harvard has a lot of questions left to answer if it wants to turn that “if” into a “when.”