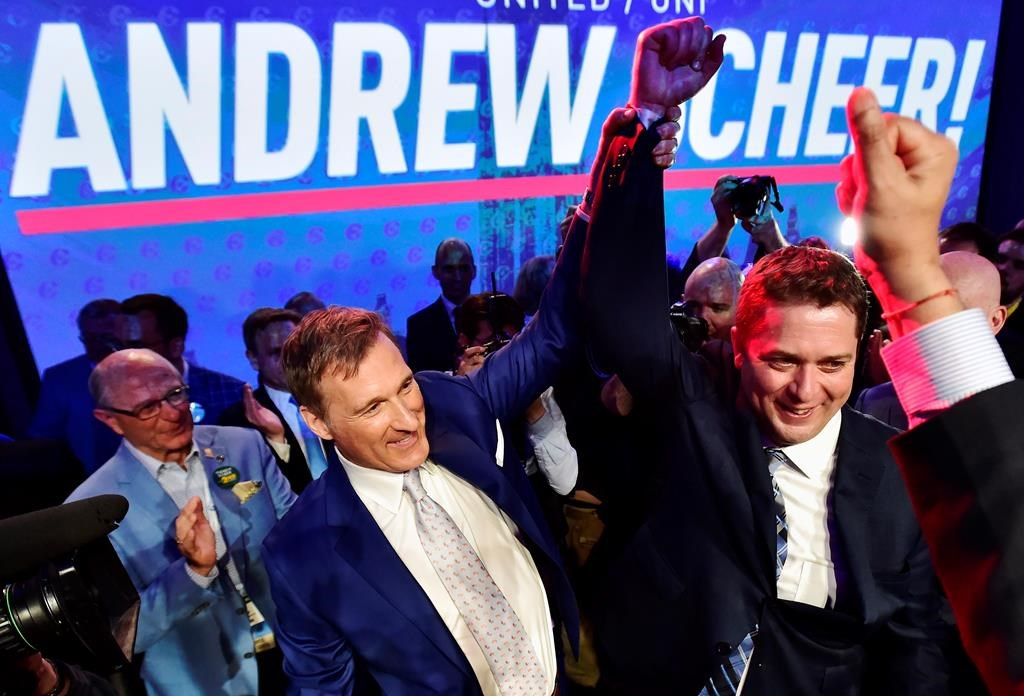 Outgoing Conservative Leader Andrew Scheer chuckled Friday when asked if he wishes he had done anything differently during his time at the party's helm.

Scheer was all but forced out as leader in December, after weeks of criticism of his personal role in the party's failure to unseat the Liberals in the 2019 election.

He said then he was no longer willing to make the personal sacrifices needed for the job and stepped aside. It's not a decision he regrets, he told The Canadian Press in an interview Friday.

"It was the right decision, and staying on as interim leader has provided the caucus with much needed stability during the leadership race without crowding out the space for those candidates," he said.

"I've been tremendously focused on doing all the preparatory work so the next leader has a well-oiled machine on the party side and a cohesive caucus that is firing on all cylinders."

The political landscape has shifted since Scheer stepped back, as the COVID-19 pandemic has upended Canadian life.

Nearly every piece of potential federal legislation or action is on hold, and for a time, Parliament was as well.

That briefly relegated Opposition MPs to the same place most Canadians were in: sitting back and watching the Liberals' back-to-back news conferences each day.

Scheer said getting the government to return to some measure of parliamentary accountability — though he wants more — was a victory, as has been the fact his MPs have forced changes to COVID-19-related emergency aid.

"We're starting to sense that more and more Canadians are really asking tough questions about the government's handling of this crisis," he said.

"I am extremely confident that the next leader is going to be able to highlight those deficiencies in Mr. Trudeau's response in the pandemic as well as explain how a Conservative government will get us through the consequences of the pandemic better."

Before COVID-19, a replacement for Scheer was to be named June 21.

But the party punted that date, and for a time paused the race. What it didn't change was the deadline hitting at midnight Friday for anyone wanting to vote for the new leader to have registered as a member.

The vote will take place over the summer by mail, with all ballots required to be returned by Aug. 21, and a winner announced shortly after.

Lewis and Sloan both emerged from, and are counting on, the same wing of the party: social conservatives.

That cohort was partially responsible for handing Scheer his win in 2017. The ranked ballot the party uses saw supporters of the main social conservative candidate Brad Trost pivot to Scheer instead of the more libertarian-minded Maxime Bernier.

But in turn, it was Scheer's socially conservative views that would be his political undoing.

Before last fall's election, it took him days before he'd share his personal position against abortion, and his promise not to reopen the debate on it if he were prime minister never took hold.

Meanwhile, his inability during the campaign and after to clearly articulate support for LGBTQ rights, including his refusal to march in a gay-pride parade, were among the reasons people said he needed to go.

By contrast, Lewis and Sloan have been clear they intend to put forward policy to curtail access to abortion. Sloan and Lewis have also said they won't march in gay-pride parades, though Lewis has taken a more nuanced position on LGBTQ rights overall.

Scheer acknowledges his own views were a factor in his party's defeat.

He said what he'd tried to do in both the leadership race and the general election was make it clear he saw no value or need to bring forward policies that would divide not only his own caucus but potentially the country.

The next leader needs to be able to keep potential divisions at bay, he said.

"You don't gain more by subtraction," he said.

"For our party is it essential that every type of conservative feels that they have a home in their party, that they are welcome in our party, and that the next leader continue to try to find that common ground and keep everyone focused and united," he said.

There is a potential wild card: longtime Ontario conservative activist Jim Karahalios was in court Friday arguing that his disqualification from the federal leadership race ought to be overturned.

A few weeks before the cutoff for candidates to register in the contest, his campaign sent out an email accusing O'Toole's campaign chair of promoting the implementation of Islamic religious law, known as Shariah, in Canada.

Walied Soliman, a prominent Toronto lawyer, has worked on the legalities of finance arrangements that satisfy Islamic restrictions on charging interest.

Accusing someone of supporting Shariah law is often taken to be an anti-Muslim slur. Complaints against Karahalios were filed with the party, starting a process that led to his dismissal.

A decision in the case is expected soon.

This report by The Canadian Press was first published May 15, 2020.

Good to know that two of them

Good to know that two of them are bound and determined to curtail abortion rights for Canadian women. This tidbit needs to be front and centre from now on — these folks are warriors in the War on Women.

Peter MacKay suggests Magnitsky Act should be used against China

By The Canadian Press | News, Politics | May 8th 2020
Coronavirus in Canada

By Stephanie Levitz | News, Politics | May 1st 2020
Coronavirus in Canada