Some businesses wary about reopening as COVID restrictions ease 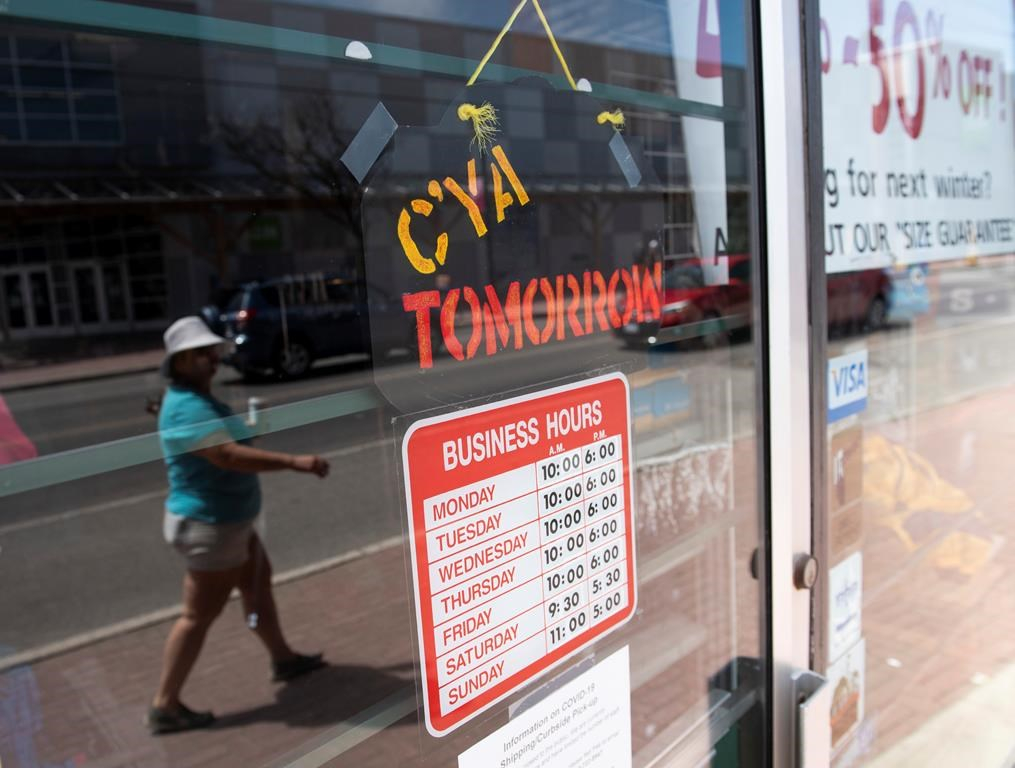 A sign on a closed shop welcomes shoppers to return tomorrow, in Ottawa, on Monday, May 18, 2020. Photo by The Canadian Press/Justin Tang
Previous story
Next story

Businesses in some provinces spent the long weekend preparing to reopen ahead of an easing of restrictions aimed at curbing the COVID-19 pandemic, even as others said they're not yet ready to throw open their doors.

Ontario has given the green light to certain retail stores to open their doors Tuesday as the province enters the first stage of its reopening plan.

The construction industry has also been given the go-ahead to resume operations, and some surgeries will be allowed to proceed.

Some stores, however, said they're holding off on reopening their doors for now despite the provincial permission, citing health and financial concerns.

Peter Birkemoe, who owns The Beguiling comic book shop in Toronto, said the business has been doing well with online orders and, as of last week, curbside pickup. Safely reopening the store would take more resources to serve fewer customers, which would represent "a big step backwards," he said.

While he misses interacting with customers face to face, Birkemoe said it's not worth jeopardizing his health and that of his staff, or the work they're currently doing.

"I would really like to have that back, but not at the risk of the small part of my business that is actually working right now," he said.

Urban Gardener, a plant and garden store in west-end Toronto, said on social media that reopening now would feel "irresponsible" given that customers often spend more than an hour inside and are constantly touching the inventory.

"We need a bit more time to figure out how we can reorganize the shop to provide a safe (yet still browse-worthy!) experience for our customers," it said on Instagram.

Others said they're eager to open up shop again, but may need more time to prepare.

Stephen Yorke, who owns the Toronto record store Dead Dog Records, said he would will reopen his store's two locations as soon as possible, but not until he can equip the cash area with plexiglass screens later this week.

Even then, the stores will only be able to accommodate two to four customers who will be supplied with latex gloves before they can do any browsing, he said. Staff will continue to sanitize common areas, including door pulls and card readers, he said.

A partial reopening is also expected Tuesday in British Columbia, but that hinges on businesses and organizations having plans that comply with provincial pandemic guidelines.

Renee Geraghty, the managing partner of AXIS Hair Salon in Vancouver, said the pandemic has upended the way the salon has operated for 30 years.

"There are some nerves," she said in an interview. "Nerves about team perception, client perception and safety."

Geraghty said the salon is also struggling to deal with a backlog of 800 appointments that had to be cancelled due to COVID-19 restrictions.

"It's like funnelling six lanes of traffic into one," she said, noting the salon will be training staff on Tuesday with a tentative plan for a soft reopening Wednesday and Thursday.

"It is going to be a bit of an anxiety-provoking week for many, many people," Dr. Bonnie Henry said Monday. "Then we'll get used to it."

A May long weekend under the shadow of COVID-19 was further dampened after a Snowbird plane crashed in British Columbia on Sunday while on a cross-country tour meant to impart hope during the pandemic.

Capt. Jenn Casey, a public affairs officer with the Canadian Forces, died in the incident, while Capt. Richard MacDougall, the pilot of the aircraft, was being treated for injuries described as not life-threatening following the incident in Kamloops.

"Canadians look at the Snowbirds as a source of joy and an exhibition of the incredible feats that our people in uniform are capable of," Minister of National Defence Harjit Sajjan said of the crash that occurred in Kamloops.

"Operation Inspiration was intended to lift the spirit of Canadians at this difficult time and the Snowbirds accomplished their mission. I know that all Canadians grieve this tragic loss."

In Quebec, the province removed more police checkpoints that have limited non-essential traffic to some regions, including the one between Ottawa and Gatineau.

Premier Francois Legault said Monday that the situation in the Greater Montreal area has stabilized enough to allow retail stores to open on May 25 as planned.

Daycares will open on June 1, with a limited number of spaces in order to meet distancing requirements, he said.

The 34 deaths due to COVID-19 recorded on Monday is the lowest in several weeks, said Legault. He added that several hundred health-care workers who had been sidelined due to COVID-19 had returned to work, meaning the hospital system is now better prepared to handle an increase in cases if one occurs.

There have been roughly 78,000 cases of the respiratory illness across Canada as of Monday afternoon, including 5,842 deaths and 39,251 resolved.

This report by The Canadian Press was first published on May 18, 2020.

B.C. classes will soon be in session, but parents' reactions are mixed

We need to know how many

We need to know how many people, or what fraction or people, are roaming around as asymptomatic virus carriers and transmitters. Do the health authorities know and do not want to tell us, or do they not know?