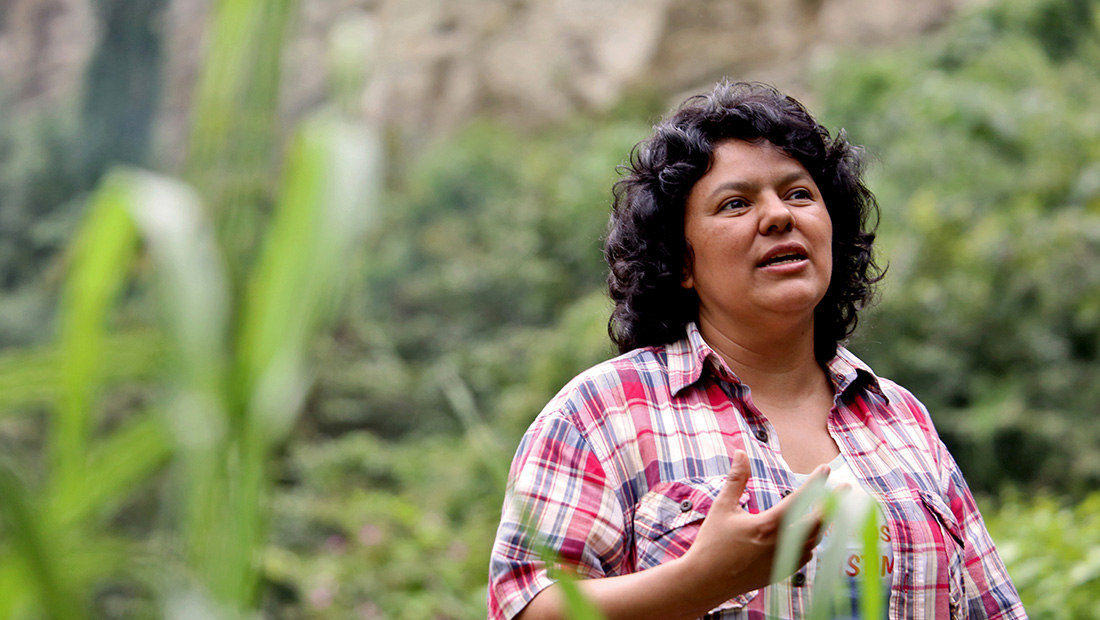 Berta Cáceres, a Honduran environmental activist who was murdered in 2016. Photo supplied by Defend the Defenders campaign
Previous story
Next story

The COVID-19 pandemic has made working on social justice campaigns more difficult, but also more necessary than ever, resulting in creative solutions and closer collaboration.

Young climate activists, their street protests stymied by the pandemic, are taking to the digital realm to highlight the disproportionate impact climate change has on Indigenous communities and environmental defenders around the world in an online campaign using the hashtag #defendthedefenders.

Meanwhile, a wide swath of Canadian civil society groups are making a concerted push for the country to create a 'Just Recovery,' designed around six principles that would enable a more equitable and sustainable future, including the upholding of Indigenous rights.

The moves come as the global pandemic has made it clear that economies can be shifted quickly when urgent needs are identified.

“Throughout the recovery process, Indigenous Peoples must be at the table, as should voices from all structurally oppressed communities,” said Lindsey Bacigal in a statement. Bacigal is communications director of Indigenous Climate Action, one of more than 150 groups involved in the Just Recovery push, which also includes labour unions, student groups and churches.

The other principles of Just Recovery include a paramount focus on people’s health and well-being, a stronger safety net and direct relief, prioritizing the needs of workers and communities, and building resilience to face future crises.

The Just Recovery document has been signed by the Canadian Labour Congress, the Anglican Church of Canada, the Canadian Centre for Policy Alternatives, the Toronto Environmental Alliance, the Canadian Federation of Students and many more. (The full list of signatories is here.)

Like the Just Recovery alliance, the 'Defend the Defenders' coalition is collaborating more closely in order to overcome the daunting challenges of lockdown and social distancing.

“We’ve realized how we can work together as people from different countries to spotlight important issues because we were all forced online, because we couldn’t protest physically, we inevitably became more international,” said Joel Lev-Tov, an 18-year-old student journalist and activist from the suburbs outside Washington, D.C.

He is affiliated with Polluters Out and Fridays for Future Digital, groups that, along with Extinction Rebellion, are in the early stages of an eight-week campaign to shine a spotlight on various regions of the world where Indigenous people and land defenders face persecution.

Young climate activists, their street protests stymied by the pandemic, are taking to the digital realm to highlight the disproportionate impact climate change has on Indigenous communities and environmental defenders around the world.

The groups calculate that Indigenous Peoples protect more than a fifth of the Earth’s surface and 80 per cent of its biodiversity, despite only accounting for 5 per cent of the global population.

Last week their focus was on Latin America, where Colombia and Brazil rank among the deadliest places in the world for people protesting against mining, agribusiness, logging and other activities.

For Aishwarya Puttur, a 14-year-old whose family recently moved back to the Greater Toronto Area after a stint following her father’s job to Saudi Arabia, that has meant helping produce a video about a coal mine being built next to an Indigenous community in Brazil.

“Through this campaign I have learned so much, I have talked to so many people across the globe about Indigenous rights, and this way we are able to bring light to these issues which normally people don’t know about,” she said.

As we know, the climate crisis is becoming a greater and greater challenge for our generation. So help the defenders out by joining our weekly actions to #DefendTheDefenders! Listen to what they have to say!
Video credit: Aishwarya Puttur (IG: @/the_green_gal) pic.twitter.com/1JmmkpnnMg

The campaign, which this week is focused on sub-Saharan Africa, involves live streams and webinars, and organizers are encouraging participants to post on social media in the hopes it will pressure governments and corporations to better protect the rights of those protesting resource extraction and environmental degradation.

More than 160 people were killed in 2018 for defending the environment against destructive industries, according to a July 2019 report from Global Witness, with the largest number of deaths occurring in the Philippines, Colombia, India and Brazil.