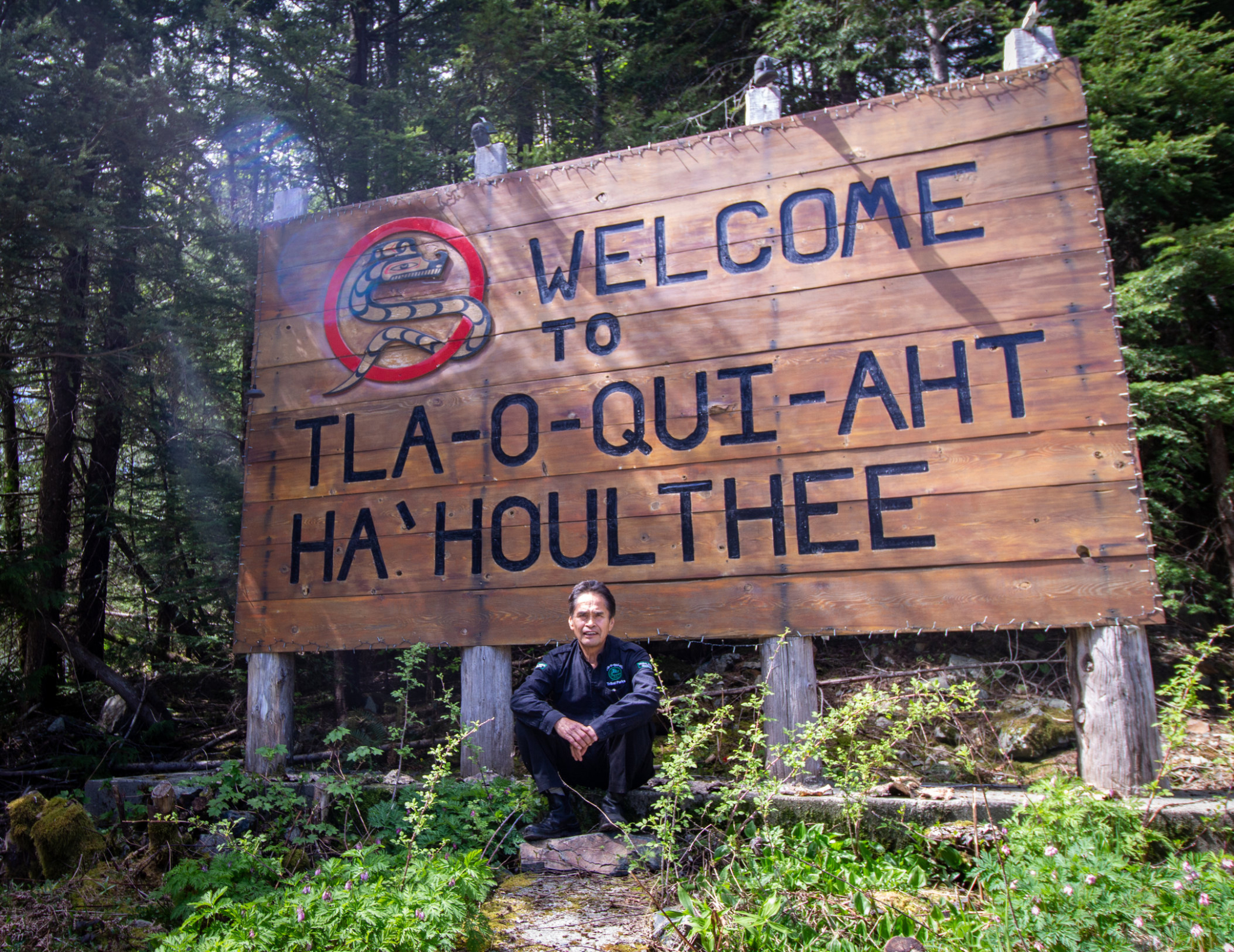 Tla-o-qui-aht master carver Joe Martin told the story of when Nuu-chah-nulth people five generations back quarantined in a cave in a river valley in their territory, to survive the smallpox pandemic of the time. Photo by Emilee Gilpin
Previous story
Next story

COVID-19 isn't the first foreign disease that Indigenous people have had to seek refuge from. Five generations ago, on the west coast of what is today known as the province of British Columbia, a Nuu-chah-nulth woman named Tlaook brought family members to a hidden place in their territory, where they quarantined from diseases that decimated the rest of their nation.

This story is well known among the Tla-o-qui-aht people, and their ancestors' insistence and insight continues to guide the nation's unprecedented Tribal Parks program and conservation work.

“It's not the first time our people have been impacted by diseases that have come from abroad. There is a common understanding that we can return to times of pandemics, and our elders wanted to ensure that our grandchildren and great-grandchildren always have places to access clean water, clean air, our traditional food systems and places we can quarantine,” Eli Enns, from the Tla-o-qui-aht Nation told National Observer in a phone interview.

“That has been a part of any initiative our nation has taken regarding the land — that we need to be sure there is a safe place of refuge.”

Enns is the CEO and president of the Iisaak Olam Foundation, a nonprofit that mobilizes and builds capacity for Indigenous Protected and Conserved Areas (IPCAs). IPCAs are “lands and waters where Indigenous governments have the primary role in protecting and conserving ecosystems through Indigenous laws, governance and knowledge systems,” according to a 2018 report, "We Rise Together," written by an Indigenous Circle of Experts pulled together to help Canada reach its 2020 biodiversity targets.

Iisaak means “to observe, appreciate and act accordingly,” the highest law in the Nuu-chah-nulth constitution, represented at the top of the totem by the sun-moon crest, according to the organization's website. Olam is taken from the Hebrew phrase ‘Tikkun Olam,’ meaning “to repair, heal or perfect the world,” which is a Jewish ethic of responsibility for the health of people and nature.

The IPCA Alliance works with Indigenous knowledge systems and western science to support Indigenous Peoples across Canada to establish, govern and manage their own territories.

The Tla-o-qui-aht nation has been a strong example of successful land and water management, and clean energy development, grounded in Nuu-chah-nulth laws and the wisdom of ancestors like Tlaook, who knew the importance of preserved places of refuge.

This is where Canada has got it wrong, Enns said, and this time of global panic is an opportunity for governments to look at past mistakes and move forward in a better way.

As far as he is concerned, reconciliation has not quite died, but it must move beyond rhetoric and conferences.

Enns pointed toward Canada's national parks to see where conservation efforts lack Indigenous expertise. He used the Pacific Rim National Park Reserve, on the west coast of Vancouver Island, as an example. The park reserve, created in 1970, fell under the responsibility of what was then known as Indian and Northern Affairs Canada, when Jean Chrétien was minister. At the time, the priority of the reserve was protection for visitor experience, Enns explained, which has since changed.

In the early 2000s, Parks Canada adopted the principle of ecological integrity, a management priority that former environment minister Catherine McKenna later elevated as top priority for all parks across Canada. Enns said parks managers struggled to preserve ecological integrity, thinking of the land in square boxes, which is when the Tla-o-qui-aht nation stepped in thirteen years back, to help strategize around protected areas, allowing Indigenous-led tribal parks to interact and support National Parks, and vice versa. The solution they found at the time was a new Indigenous-led Tribal Park called the Ha'uukmin Tribal Park.

“Our watershed governance comes from one of the most powerful teachings, Iisak, which has been explained by elders as observing, appreciating and acting accordingly,” Enns explained.

“We have been taught to observe mother nature's cycles, how the sun and moon interact and influence life at a watershed level, to see how life transforms, changes, and how our own inner worlds are influenced, so that we ourselves are in sync with nature's cycles, and we act accordingly.”

Enns called Indigenous Peoples “elder societies,” considering Indigenous knowledge systems have existed for millennia. Canada, with 150 years, should be considered in its adolescence, he said, which means there is a lot of room for growth, and a lot to learn.

“Initiatives like Indigenous protected and conserved areas are an olive branch from elder societies. We're saying, 'Hey, you're going to destroy yourself, and there's another way to work together.'”

Joe Martin is a Nuu-chah-nulth knowledge carrier and master carver, born and raised in his home territories in Tla-o-qui-aht. His home and wood shop are located in what Canadians call Tofino. Martin grew up hearing stories of when his elders and ancestors lived for life beyond sustainability.

“Our people practiced abundability, not sustainability,” Martin said during a video call, while working on his latest dugout canoe while quarantined in his shop. “Sustainability is about keeping something on a lifeline, until you're done with it, but the way we lived, we worked with the land in a way that would provide for many generations to come.”

COVID-19 is an opportunity to look at how humans have behaved on the earth, especially when it comes to water, Martin said.

Martin carves massive dugout canoes and totem poles, which he said most non-Indigenous people never understand how to read.

“When Europeans came to these shores, they thought we were illiterate if we couldn't read or write, but they were illiterate to our art,” he explained. “Our totem poles, as well as different forms of Indigenous art, are teachings of natural law, and that's what we lived under. We knew and respected it.”

Every crest of a traditional totem pole, as well as talking sticks and other Indigenous art, are infused with teachings — stories about creation, valuable teachings about respect, balance, life, the order of things and beyond. One teaching that Martin has thought of lately, as the world has been connected through a massive health pandemic, is the teaching of fear.

“Our elders used to say, if you are afraid and you want to learn something, you can only learn a little, but if you're not afraid, they would say, opening their arms out wide, you could learn anything,” Martin said. “Today, I see fear everywhere. In the old days, people were told to overcome their fear, before coming back to the village, but it's not the same as it was before.”

Timeless teachings aren't just found in Indigenous art, they live and breathe in Indigenous ceremonies, relationships and rites of passage, he explained, based on natural law.

People learned to deal with fear throughout their upbringing, by being initiated, and by learning discipline and respect, he said, comparing it to a culture of greed he witnesses today.

“Initiation into the wolf clan was the beginning of the teachings for the rest of your life — teaching your roles and responsibilities in community and with nature,” Martin said. “One of the most important teachings was to only take what you need. We were taught that mother nature will provide for our needs, but not our greed.”

When news about COVID-19 and the local, national and international cry to quarantine found Joe on the foggy west coast of the island his people have fought to protect from logging and other industrial development, he was shocked to see the way panic immediately unfolded.

“I went to the grocery store and there were empty shelves. People had taken as much as they could,” Martin said. “Someone asked me if I was stocking up, but I said no, I'm taking only what I need.”

Two years ago, Martin took his two daughters to the place where his ancestor Tlaook had quarantined from the smallpox outbreaks. Today, Martin thinks about that place and the foresight of his people, and he wonders whether Canada is ready to listen.

“I hope we go back to the old ways,” Martin said.

He is currently finishing up two dugout canoes in his shop. He carries many stories about these old ways, about when and how his people hunted whales to feed the community, about how and where to harvest cedar, about sustainable fishing practices, about reading natural law, and about “the important things in life,” and he said he's willing and able to share, for anyone willing to listen and learn.

I'm still wondering and very curious about the quarantine mentioned in the leader. When? Where? What were the circumstances?

Hi Henry, a group quarantined five generations ago, as the oral history goes. They were in their own Tla-o-qui-aht territories, though they continue to keep the exact location between communtiy members. It was when the smallpox pandemic was at its worst, and under the leadership of Tlaook, they remained in the area for four years. When they returned, many of their people had died, but the story of the importance of a preserved place of refuge, lived on.

Thank you Emilee. Keep writing these stories. Settlers like me, who have hiked the West Coast Trail, know the value of locating fresh water sources and we only need them to pass through and continue on our journey for a few days, not generations.

Thanks for reading, Graham.

Thanks for reading, Graham. All of us with a profound connection to the lands and waters we visit, are related or connected to, know how important it is for us to preserve their health and wellbeing. I hope you are keeping well in all of this. Keep your ears and eyes open for more positive stories.