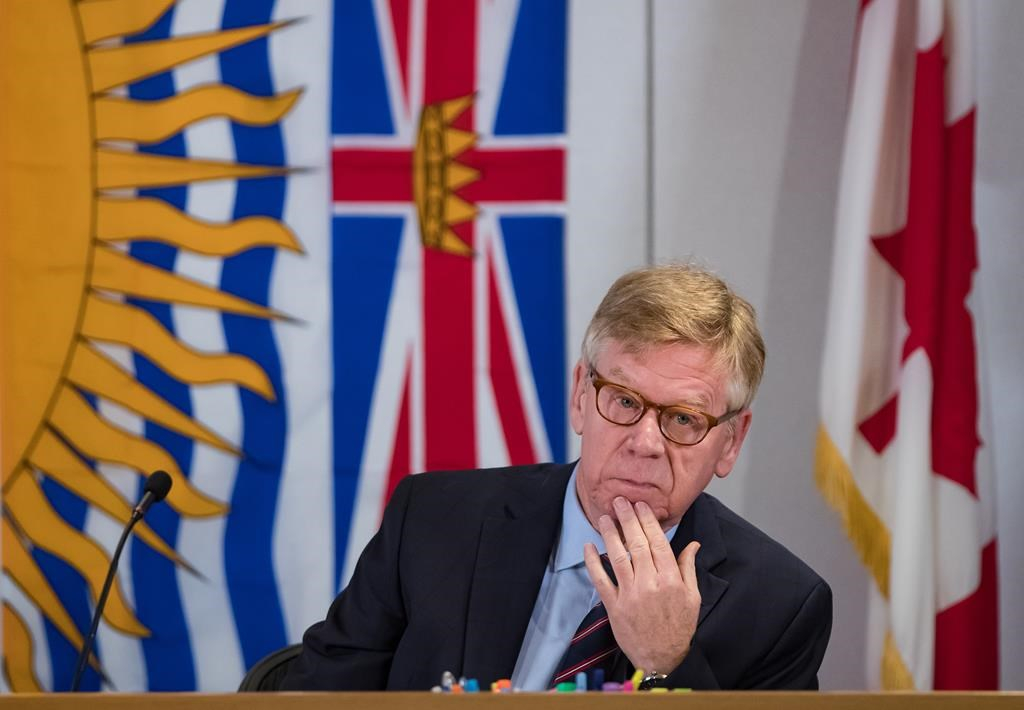 Commissioner Austin Cullen listens to introductions before opening statements at the Cullen Commission of Inquiry into Money Laundering in British Columbia, in Vancouver, on February 24, 2020. File photo by The Canadian Press/Darryl Dyck
Previous story

A senior police officer from the United Kingdom with expertise in money laundering says "underground banking" linked to China has become a significant threat in the U.K. and he believes Canada shares some of the same vulnerabilities.

Simon Lord of the National Crime Agency, who is also part of a Five Eyes group dedicated to international money laundering controls, testified before a public inquiry into money laundering in British Columbia on Thursday.

Money laundering is mirrored in countries like Canada and the U.K. because they have similar legal and economic frameworks, he said.

Aspects in both countries designed to attract investment or "good money," like having a developed financial system and global trade links, often also attracts "bad money," he said.

"I wouldn't say Canada is any more or less vulnerable to money laundering, and certainly British Columbia, than any other large Western country," Lord said.

Generally, he says Canada is "pretty well run" and referenced a 2016 review by the Financial Action Task Force, an international organization founded to combat money laundering, that found some deficiencies in regulation.

However, there has been an apparent "upswing" in underground banking networks connecting the proceeds of crime in the U.K. with capital flight from China, he said.

Investigators began noticing the problem in the U.K. around 2015 and Lord estimated it's in the scale of "hundreds of millions if not billions" of British pounds.

Some of the same examples, such as links to real estate, are happening in major cities around the world including Vancouver and Auckland, he said.

Under the model, underground bankers help wealthy Chinese citizens move their money out of the People's Republic of China, which limits annual export of funds per person to US$50,000 and restricts how it is spent, including a ban on buying property, he said.

Lord repeated several times that not everyone who uses a so-called "informal value transfer system" is criminal and he is not implying this problem was created by members of the broader Chinese community in the United Kingdom. Transferring more than $50,000 out of the country would also not be considered a crime in the U.K., he noted.

But the underground bankers have married the demand from Chinese citizens moving funds with the supply of dirty money from criminals, who are not necessarily Chinese.

Under the model, the Chinese citizen who wants to transfer money out of the country makes a payment into a bank account in China operated by the underground banker, Lord said.

He then receives the equivalent funds in a British bank. That account is fed by cash collected by the banker from U.K. criminals.

The criminals in turn typically want to move their money out of the country, for example, to purchase cocaine in South America. So, the banker makes an equivalent payment less a commission in South America on behalf of the criminal.

The system is "grown as a result of local conditions but abused by criminals," Lord said.

Underground bankers have also recruited "nominees," including students, to volunteer their bank accounts for the transfers in exchange for commissions of around 2,000 to 3,000 British pounds a month, he said.

Lord also warned that there are consequences to being perceived as a country that is vulnerable to money laundering.

"As soon as you are seen as a bad place to do business, if your regulatory structures aren't in place, if there are lots of ways in which your country can be abused, then people simply don't want to put their money there," he said.

When that happens, remittances go down, the cost of borrowing goes up and the amount of money available for public services goes down, he said.

"It really is imperative that countries get on top of this type of thing because they can suffer all kinds of ill effects from it."

B.C. launched the inquiry amid growing concern that illegal cash was helping to fuel its real estate, luxury car and gambling sectors. Prime Minister Justin Trudeau's government is participating and says it is committed to tackling the national problem.

The inquiry heard opening statements in February and will delve into specific industries starting in September.

The inquiry is currently getting an overview of money laundering and the various regulatory models designed to fight it around the globe.

BC money laundering inquiry to examine hotbeds of dirty money