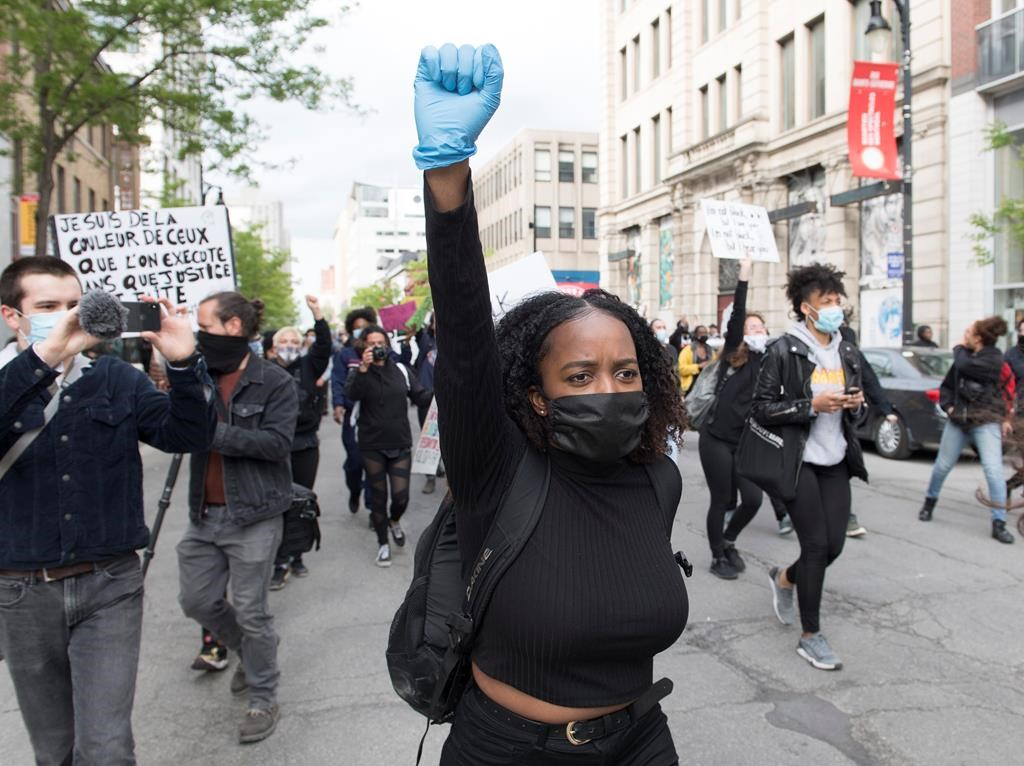 A woman raises her fist during a demonstration calling for justice for George Floyd in Montreal, on Sunday, May 31, 2020. Photo by The Canadian Press/Graham Hughes
Previous story
Next story

A Montreal anti-racism protest demanding justice for a black Minnesota man who died following a police intervention last week degenerated into clashes between police and some demonstrators on Sunday night.

The #MontrealProtest was peaceful for hours until some trouble making white people decided to take advantage of the situation. pic.twitter.com/82sJ0tjv4t

The march had snaked its way through downtown Montreal on Sunday afternoon without incident, but Montreal police declared the gathering illegal about three hours after it began when they say projectiles were thrown at officers who responded with pepper spray and tear gas.

what the #MontrealProtest ACTUALLY looked like before police decided to come in and tear gas for no fucking reason: a thread
PLZ SHARE don’t let the media flip this protest into something it wasn’t #BlackLivesMatter ✊🏽✊🏾✊🏿❤️ pic.twitter.com/5xVRbzUoIJ

Tensions flared after the formal rally had concluded and some demonstrators made their way back to the starting point, in the shadow of Montreal police headquarters downtown.

Windows were smashed, fires were set and the situation slid into a game of cat-and-mouse between pockets of protesters and police trying to disperse them.

Demonstrators had gathered to denounce racist violence and police impunity — both in the U.S. and at home in Montreal.

George Floyd died in Minneapolis on Monday after pleading for air while a white police officer pressed a knee on his neck.

His death has sparked nightly protests in major U.S. cities.

The Montreal rally was a solidarity gathering with American anti-racism activists, but organizers say it is also an opportunity to express their own anger at the treatment of racialized people in Quebec and elsewhere in Canada.

"It's important for everyone to be here today so that we can have a lot of voices to say the George Floyd event is not a singular event," said Marie-Livia Beauge, one of the event organizers in Montreal.

Some of the names invoked included names of black men killed during Montreal police interventions in recent years.

"It's important for everyone to be here today so that we can have a lot of voices to say the George Floyd event is not a singular event," said Marie-Livia Beauge, one of the event organizers. "It keeps happening and it's happening here in Montreal so to be here together is to show solidarity and denounce the injustice."

The gathering drew Montrealers of all stripes and backgrounds, holding posters with slogans. Protesters chanted "Black lives matter" and "I can't breathe" — what Floyd was caught on video saying.

They took a knee in unison several times in solidarity with the movement.

But when Montreal police called on protesters to disperse, some refused.

Leah Blain, 20, chose to continue demonstrating and was part of a group trying to reach police headquarters when she was met with pepper spray.

"We were just standing here, we were showing our support and this is what happens, the police support a system that's against us, so if you support them, you're against us," she said.

On Sunday evening, Steve Haboucha was clearing broken glass from the frame around the front window of his Koodo Mobile store on Montreal's Ste Catherine Street. Security video from his store, he said, shows a stream of people entering the cell phone shop and leaving with accessories over a 30-minute period.

About ten police officers were there, standing over broken glass, keeping guard outside. Haboucha said the police told him there were "hundreds" of stores that suffered the same fate along the route the protesters took.

A few kilometres west on the same downtown street, the loud pops of cracking glass echoed through the neighbourhood, preceding a group of people who turned their destruction onto seemingly random targets.

On one corner, a group used a metal construction sign and its steel stand to smash the front glass of a payday loan branch.

All along Ste Catherine, people smashed windows and looted stores, while trying to evade police.

Before chaos erupted, Vincent Mousseau, a social worker and community organizer, called out Montreal Mayor Valerie Plante, who earlier Sunday had condemned "violence, racism and systemic discrimination" in a series of tweets.

"In fighting this, we need to ensure our movements are not co-opted to stifle our anger with their kind word and simultaneous inaction," Mousseau said.

Due to the COVID-19 pandemic, organizers repeatedly told people to spread out, trying to find a spot where a two-metre distance could be maintained.

The location adjacent to Montreal police headquarters was packed, with police closely guarding the building that houses their brass.

Dr. Horacio Arruda, Quebec's director of public health, told Radio-Canada on Sunday evening that he recognized the importance of the cause but urged hand washing and for anyone exhibiting symptoms to let health authorities know they attended the protest.

Around the start of the demonstration, Montreal police took the unusual step of issuing a tweet saying they were dismayed by the death of George Floyd.

"Both the action taken and the inaction of the witnesses present go against the values of our organization," the force tweeted calling on for a peaceful demonstration.

"We respect the rights and the need of everyone to speak out against this violence and will be by your side to ensure your safety," the police said.

The Montreal rally followed one in Toronto on Saturday, which remained peaceful.

Some of the thousands of people marching in Toronto pic.twitter.com/PkOZX7qFwk

So too did Sunday's rally in Vancouver, where thousands gathered outside the city's art gallery, waving signs and chanting their support of the Black Lives Matter movement and Floyd.

Tristan Miura, who held up a skateboard painted with the words "injustice anywhere is a threat to justice everywhere," said he hopes Vancouver will reflect on the protesters' message.

"Vancouver has always been quite liberal and very open about what they feel is wrong in the community," said Miura. "I think Vancouver, as a whole, is taking this time to reflect on past issues and preventing further issues from occurring."

Others hoped it would spark a larger reaction in Canada.

Vancouver police said there have been no arrests during the event.

Vancouver police now estimate around 3,500 people have gathered around the art gallery. Speakers continue to share stories of oppression. All surrounding streets have been closed @cbcnewsbc pic.twitter.com/sKVO2KEcwO

This report by The Canadian Press was first published May 31, 2020.

— with files by Nick Wells in Vancouver. Media embeds added to the story by Canada's National Observer.

New York City, May 29, 2020, protestors in streets clash with police

On the morning of June 1, former president Barack Obama provided words of encouragement to young activists.

I wrote out some thoughts on how to make this moment a real turning point to bring about real change––and pulled together some resources to help young activists sustain the momentum by channeling their energy into concrete action. https://t.co/jEczrOeFdv