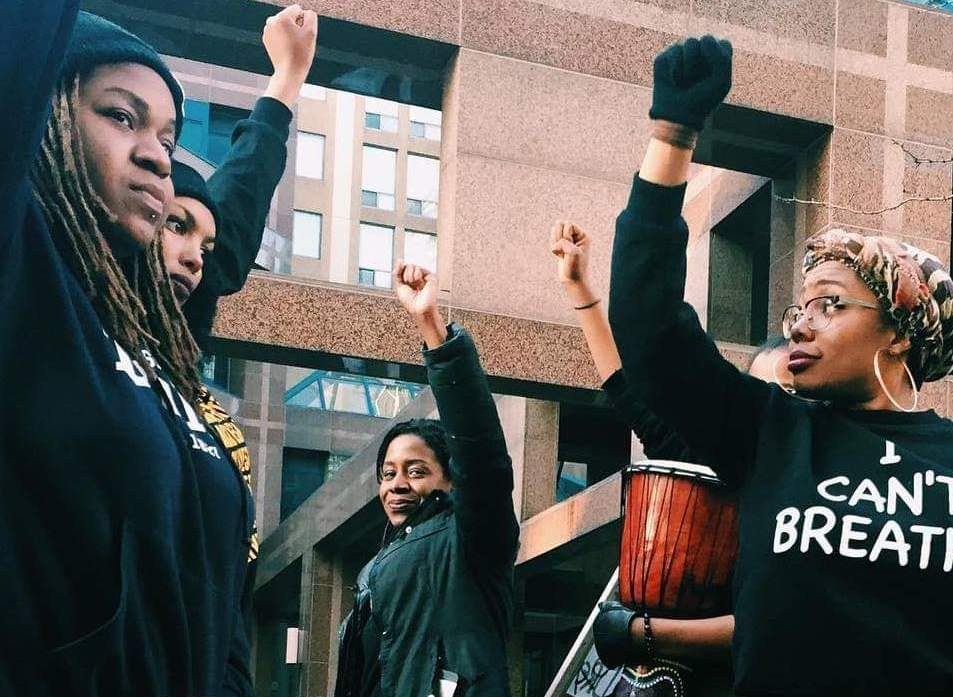 Protests against police brutality spread from the United States to Canada over the weekend, sparked in part by last week’s death of a young Black woman in Toronto, as critics argue that systemic racism festers just as deeply here.

Thousands of people took to Toronto’s streets on Saturday, while similar events took place in Montreal, Vancouver and other Canadian cities this weekend, and more are planned.

The protests come amid a week of tense confrontations in cities across the United States, sparked by the death of George Floyd, who spent the last eight minutes of his life pleading with a Minneapolis police officer to take his knee off Floyd’s neck.

In Toronto, protesters marched to the headquarters of the city’s police force to demand answers after 29-year-old Regis Korchinski-Paquet fell to her death from her 24th storey apartment while alone inside with police officers on Wednesday evening.

A video documenting the anti-racism protest in Toronto on May 30, 2020. Source: Instagram page of mohtohsoh

The catalysts are not unrelated, with images of injustice occurring outside of Canada just as traumatic for those who experience the same challenges here.

“It’s like we sleep in the same water bed,” said Garvia Bailey, an independent journalist. “If they move we feel the ripples of it. And for Black people in our psyche, if you open up social media and see a man dying in front of your eyes, the geography at that point doesn’t matter.”

But Canadian protesters and the Black community here are also calling for a reckoning with race that broader Canadian society has not yet faced.

“We buy into the myth that the 49th parallel creates a widely different racial experience at our own peril,” said Sandy Hudson, a co-founder of the Toronto chapter of the Black Lives Matter protest movement.

Anti-racism protests spread to Canada following the death of a young Black woman in the presence of police last week, as critics call for a broader reckoning with race and racism north of the border

For Hudson, the latest outrages are both exhausting but also an opportunity to move beyond old fights about racial profiling and on to the pointed question of removing police funding.

She questioned why police needed to be the ones to respond to the call Korchinski-Paquet’s mother made, which related to her mental health, and said too many such Canadian cases result in the death of a person of colour.

(In April, police in Brampton shot and killed 26-year-old D'Andre Campbell, whom his family said suffered from mental illness.)

Hudson argued that civilian agencies could take on many of the roles that police are either ill-equipped to handle or that end up with them using excessive force, including noise complaints and fare evasion.

The anger and desire to stand up against the systems designed to keep people of colour down were seemingly exacerbated by the COVID-19 pandemic that has hit their communities particularly hard.

“The coronavirus puts another level of stress on people,” Hudson said. “The economic and institutional anti-Blackness creates an economic divide where Black people are more likely to be working in precarious conditions than others.”

Bailey said the latest round of police violence and resulting outrage seems to have struck a deeper chord with a wider section of society.

“It feels different, because it is bumping up against a confluence of other things...it’s like the stars aligning but not so magical,” she said about the latest protests.

The pandemic, coupled with the rise of hate and of race-baiting in recent years, makes the situation seem more urgent, she said, even if the issues remain the same.

“All of these things together are making it more widely felt, but no different that Andrew Loku or any of the other times power has been wielded in a way that ends with a Black body in the streets,” she said.

Loku was shot dead by Toronto police in 2015. A sweeping 2018 interim report on race and policing from the Ontario Human Rights Commission, written in the wake of his death, found a Black person in Toronto was nearly 20 times more likely than a white person to be shot and killed by police.

Hudson and others said that the stiffest challenge facing those trying to deal with racism in Canada is in convincing the comfortable majority that it exists.

“Canada’s anti-Blackness comes in the form of denial,” she said, pointing out how quickly the scandal of Prime Minister Justin Trudeau smearing himself in blackface and brownface on multiple occasions was forgiven.

For Lekan Olawoye, the coming battle will take place in the boardrooms of corporate Canada.

“It’s difficult to fight the enemy you can’t see, the enemy that doesn’t even believe it is an enemy,” said Olawoye, who founded the Black Professionals in Tech Network and strives to break down barriers for people of colour in the technology industry.

Racism is pernicious, and is difficult to see if you are not the target of it, said Melanee Thomas, an associate professor of political science at the University of Calgary. While a white person likely feels no tension when they visit a store, for example, a person of colour will often find themselves following by security, she said.

“Nobody follows me around the store thinking I’m going to do something nefarious, and it’s because I’m so white I’m translucent,” Thomas said.

She said white supremacy is written into the founding of Canada, pointing to the reserve system set up to house Indigenous communities forced off land that was then given to white settlers, and the historical role of police to maintain a certain type of order.

“We have to get comfortable telling the uncomfortable truths, and knowing what that means for us,” she said, of where white Canadians need to take these conversations.

I hesitate to write the following; I am afraid that it will be considered as racist, and it probably fits the racist definition according to some “non-white” people, but I think that my feelings reflect the feelings of many who are afraid to express them.

I think that the hair style of certain men, the dress of some women, the head gear of ultra- religious people is a trigger for suspicion and even fear for many Canadians of European descent. I am uneasy when I meet a hooded young man, a veiled woman, a long whiskered or strangely hatted man. I do not think that skin colour affects me: I love black athletes or artists showing lots of skin and beautiful persons with shiny brown or completely black faces, but I am not sure that I will get used to other aspects of physical appearance; I am too old to have time to change that much.

Could it be that the feelings that I admit experiencing are also felt by others and cause a negative reaction, particularly among persons of authority such as government officials or members of the police forces?

In this time of pandemic, I am also un-at-ease when I meet a person wearing a mask, even though I myself wear one when appropriate. Perhaps I will have time to get used to masks because they are so prevalent at the moment and masks are worn by all kinds of persons, not just a minority.

There, I have written it! Could dress, unkempt hairdo, unusual physical appearance that can all be changed easily be part of the problem, rather than just skin colour?