Trudeau to speed $2.2 billion in funding for strapped cities 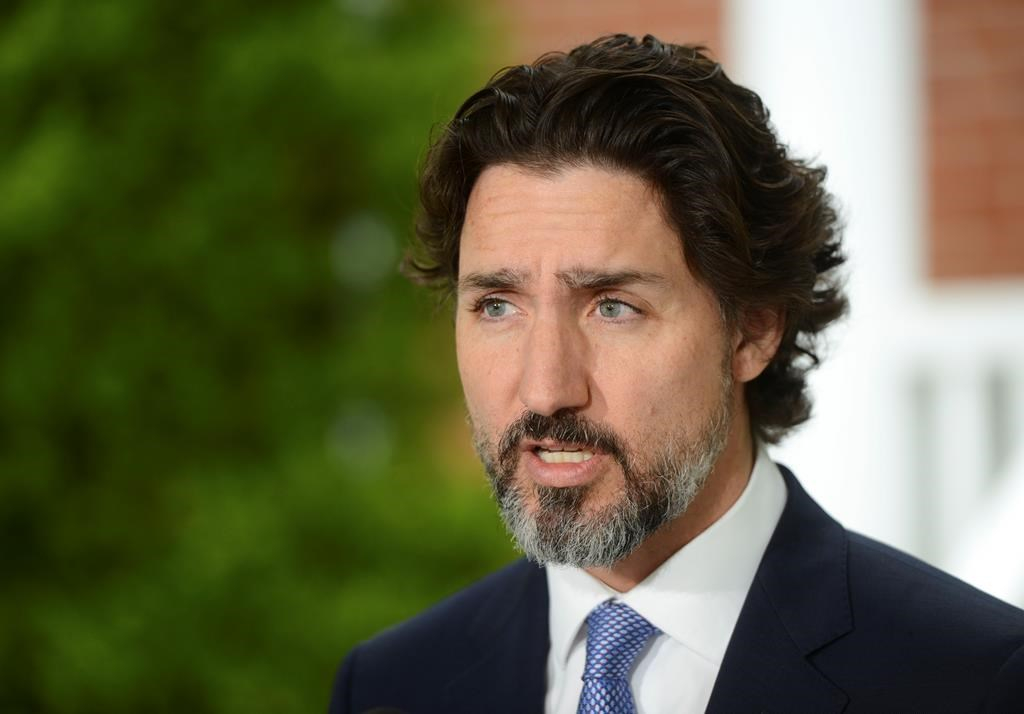 Prime Minister Justin Trudeau holds a press conference at Rideau Cottage during the COVID-19 pandemic in Ottawa on Monday, June 1, 2020. Photo by The Canadian Press/Sean Kilpatrick
Previous story
Next story

The federal government is rushing out $2.2 billion in anticipated infrastructure funding to Canada's cities that municipal leaders say might help with a short-term cash crunch, but does little to fill the budget hole COVID-19 has created.

Normally, funding through the federal gas-tax fund is split between a summer payment and a second instalment later in the year, but the Liberals plan to send all the money this month.

Municipalities have seen steep losses throughout the pandemic as fewer people pay for transit or parking, and recreation centres stay closed without paid programming.

Toronto alone is facing a $1.5-billion shortfall this fiscal year, while the Federation of Canadian Municipalities has estimated the need nationally at between $10 billion and $15 billion, depending on the severity and duration of the shutdown.

FCM president Bill Karstens said the $2.2 billion may help some cities with immediate cash flow issues, but noted the money isn't new, has already been accounted for in municipal budgets and doesn't address the stark choices local leaders face.

"There are municipalities that have certainly indicated to us that, in terms of actual cash flow, they only have another month or so," he said.

"The only true sustainable solution is for the federal government to show leadership, as I believe they want to, but they need the provinces to engage."

Ontario Premier Doug Ford was blunt about the funding, suggesting it doesn't address the key issue for cities: "We need more money." Ford said he was willing to help, but the federal government needed to step up as well.

Prime Minister Justin Trudeau said the fast-track spending was a first step as he holds talks with provinces, which have jurisdiction over municipalities.

"There is a range of services offered by cities that are at danger of disappearing," Trudeau said. "That's why we're doing what we can unilaterally and advancing the money forward, but we need to work with the provinces on this."

The gas-tax fund is one of the few mechanisms the federal government has to flow money directly to cities instead of having to move it through provinces. Last year, the Liberals doubled funding to $4.4 billion as an end-around on provinces they said were holding up project approvals and slowing down the oft-criticized flow of federal construction dollars.

Trudeau promises to speed $2.2 billion in funding for strapped cities

However, the money can only be used for capital spending, not operational costs, which is where shortfalls lie. NDP infrastructure critic Taylor Bachrach called on the government to help cities with operating funding to "avoid deep cuts to the services Canadians rely on."

While local tax increases should be on the table, the current crisis shows the need for a rethink in how cities are funded and raise revenues, said Mitch Kosny, associate director of Ryerson University's urban planning school.

"There may be some interesting willingness for provincial and federal (governments) and even the bigger cities to sit down and talk about where we go," Kosny said. "That's the opportunity."

Infrastructure Minister Catherine McKenna said the federal government needed to see municipalities go ahead with planned projects, citing as an example the need to boost transit capacity as Canadians head back to work.

She said bumping up spending is "an example of how we see infrastructure is critical to the restart of the economy."

Federal infrastructure spending is traditionally seen as a way to stimulate an economic recovery, but experts have noted the unique challenges this crisis has created. The Liberals have been told to put money into things like child care to help women who have been disproportionately affected by job losses.

"In my humble opinion as a taxpayer, stimulating sectors that have been most deeply affected by COVID-19 might be a better way to stimulate the economy."

The Liberals say spending under their $186-billion infrastructure program has created some 52,000 projects, although Giroux said he only has information to account for about 33,000.

"I have faith they do exist, but I don't have proof that they exist," Giroux said last week.

Asked about the discrepancy Monday, McKenna said the projects Giroux couldn't account for are funded through the gas-tax fund and the Canada Mortgage and Housing Corp.

— With files from Allison Jones

As their revenue streams

As their revenue streams collapse, cities and provinces are under increasing financial strain. The federal government should distribute special Covid-19 grants to sustain expenditures on goods, services and wages. The alternative to bailing out provinces and cities is a cascading wave of additional job losses and business failures that will tank the economy.

The federal government can access funds from the Bank of Canada which was established during the Great Depression to deal precisely with systemic events such as we now confront. For example, after the great financial crisis of 2008 when credit markets froze, the federal government created a $200 billion Extraordinary Financing Framework that benefited big banks, insurers, car manufacturers, and the issuers of credit cards.

Cities and provinces certainly deserve their share of robust support until the health crisis is overcome, until the economy improves, and until normal sources of provincial and municipal revenue can recover.