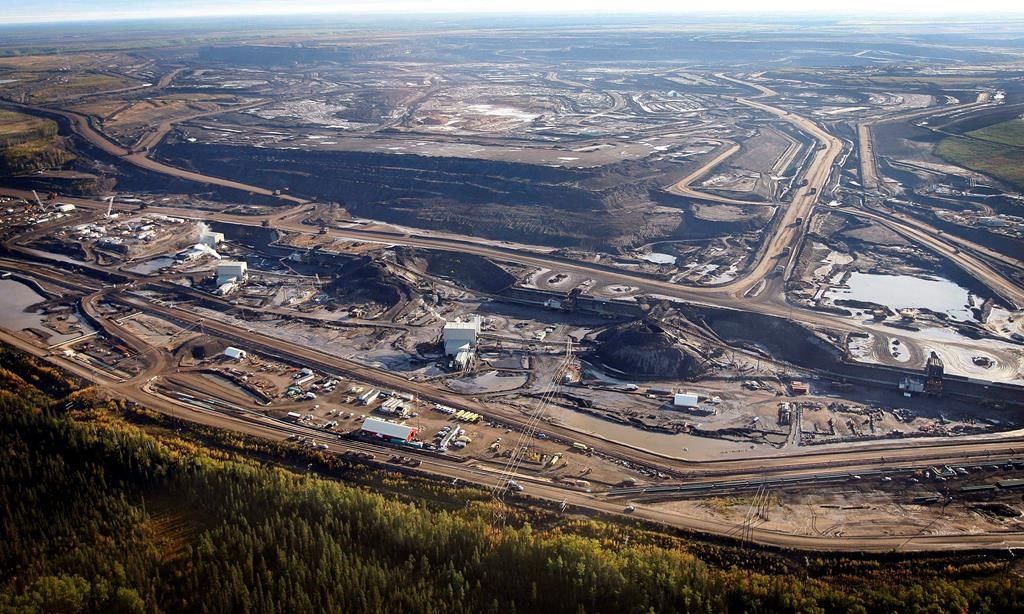 This Sept. 19, 2011 aerial photo shows a tar sands mine facility near Fort McMurray, in Alberta. File photo by The Canadian Press/Jeff McIntosh
Previous story
Next story

Alberta's Opposition leader called on Monday for the head of the province's energy regulator to resign over the suspensions.

"We've gone from having a world-class monitoring agency and we've turned it into a backroom, deal-making agency in the course of just a few months."

The Mikisew Cree First Nation, the Fort McKay First Nation and the Athabasca Chipewyan First Nation have filed their request to the regulator's internal review body. The Alberta Energy Regulator made the decision earlier this spring to suspend monitoring in what it said was an attempt to keep workers and communities safe during the COVID-19 pandemic.

Companies no longer have to monitor fumes released by burning, or look for and repair leaks of methane, a potent greenhouse gas. Surface water need no longer be tested, unless it escapes into the environment.

Most soil and groundwater monitoring is gone. In-situ oilsands operations no longer have to conduct any wildlife monitoring or research. Reclamation and wetland monitoring is also suspended.

Although some operations must resume Sept. 30, most suspensions have no end date.

"There was no consultation. There was no notification of any kind," said Melody Lepine of the Mikisew Cree. "We were all quite shocked and quite upset."

The appeal argues that the suspensions were made without any rationale linking specific activities to COVID-19 risks and despite work continuing at energy facilities. It points out the hold on monitoring came as Alberta was starting to ease its lockdown and weeks after the province declared a state of emergency over the pandemic.

The appeal alleges the move was made at the urging of industry without any attempt to hear from anyone else involved.

"The long-term consequences of this disregard for the separation between the regulator and the regulated are highly troubling," says the appeal.

"(They are) to allow proponents to effectively trigger AER decisions ... in a way that circumvents the AER’s application process (and) undermines the integrity of the entire statutory regime for energy development in the province."

Notley said Pushor, who took over the agency after its previous head left under a cloud of financial wrongdoing, is too close to the Premier Jason Kenney's United Conservative government to be an independent regulator.

"There's no question that Pushor is an extension of Kenney's UCP agenda. They're one and the same."

She said consulting with First Nations affected by a regulatory decision should be "instinctive" by now.

"They walked through the looking glass into a world that's 25 years old."

Lepine said First Nations still haven't been given any explanation of how the province will track environmental impacts during the suspension.

Monitoring is one of the conditions under which companies are granted access to the land, Lepine noted.

As well, Canada has made international promises to increase monitoring of Wood Buffalo National Park downstream of the oilsands, and the government's decision may break those promises, Lepine said.

She said no information has been forthcoming about the impact of the suspensions on the quality of long-term monitoring.

"Was there an assessment done to evaluate this decision?" Lepine asked.

Indigenous and environmental groups ask for restart of oilpatch monitoring

Jason Kenney, the UCP, and

Jason Kenney, the UCP, and their agent the AER have finally succeeded in making “oil” a four letter word.

Why isn’t every Albertan

Why isn’t every Albertan asking for the reform of Alberta’s energy and environmental oversight? This is a classic case of the fox minding the hen house! The O&G industry “funds“ the AER. But thank you, Rachel Notley, for your humorous comments: "We've gone from having a world-class monitoring agency and we've turned it into a backroom, deal-making agency in the course of just a few months”. When was the AER ever world-class? It must have been during the time their CEO was funnelling AER resources to set up his personal nest egg?! I did work for “the New Alberta Energy Regulator” during the transition and saw first hand that vast underfunding significantly hampered that unfortunate effort. Critical environmental oversight processes requiring dozens of people to manage at Alberta Environment were transitioned to a handful of inexperienced AER people (along with a lot of pretty process drawings). Am I alone in thinking that oversight of the environment and development of energy resources by a single entity is a conflict of interest?...and how about the funding of environmental oversight by the energy resource developers? Any possibility of conflict of interest there?

Alberta’s UCP government is using mounting crises as smokescreens to continue the neo-right ideological agenda of beggaring democratic control of private industry in the province and allow unfettered bitumen production at the expense of the public weal.

The tactic had availed a series of global crises since neoliberalism usurped nominal conservative political parties four decades ago, but the notional “business cyclicality”, lauded by the neo-right back in its heyday when it proclaimed the “end of history”, has since fallen out of favour as people have soured on neo-right promises of ‘trickle-down’ prosperity that never happened, save for fewer and fewer multi-billionaires.

Since the vast majority of people perceive, instead of promised prosperity, ever-widening income disparity and mounting environmental degradation, not only has the neo-right’s credibility and electability declined, but crises which no longer seem repetitions but, rather, alarmingly different in kind and degree, no longer afford the same opportunities for neo-right governments to razzle-dazzle their electorates as convincingly as they used to.

Alberta’s premier has become a political dinosaur: perhaps the “shock doctrine” seemed viable to him when his party won the 2019 provincial election and the the collapse of bitumen market price could be presumed just another one of those handy economic crises rationalized to slash more public control over the industry. However the COVID19 pandemic has revealed yet another sign that the neo-right movement, having shown symptoms of moribundity for several years now, is nearing its throes—especially in Albetar, now the redoubt of the Canadian neo-right as the pseudoCon Federal CPC now entertains handing its reins back to slightly more Tory-like, traditional conservatism of its Eastern MPs (who now comprise half of the federal caucus and have never provided a leader since the party was concocted by Stephen Harper).

Jason Kenney’s government might not know it yet, but continuing to slash the public apparatus in these extraordinary times is tantamount to jumping the shark, to rather looking more moribund by attempting to look less.