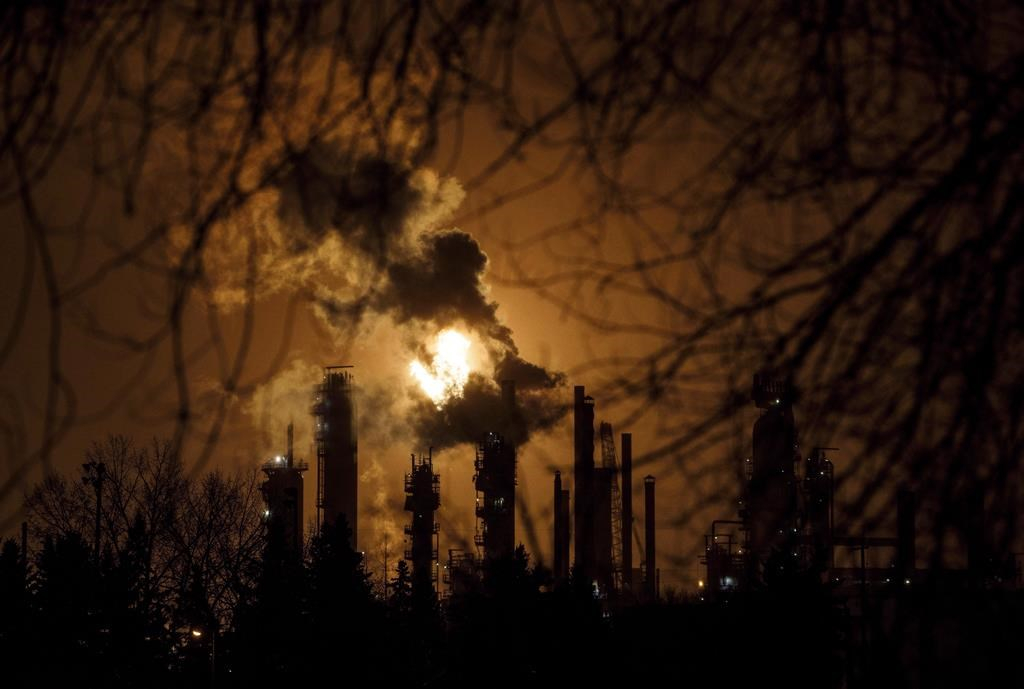 Recent environmental monitoring exemptions for the oilsands have been broadened to include Alberta's entire energy industry.

The Alberta Energy Regulator says the decisions, posted Wednesday on its website, are in response to public-health concerns over the COVID-19 pandemic.

They were made to protect those doing the monitoring and the communities they work in, said the regulator's vice-president, Martin Foy.

"These activities were moving a lot of people from jurisdictions that maybe were a higher risk to smaller communities and potentially putting those communities at risk," he said Thursday.

"We have assessed the risk associated with the suspensions and found it to be very low."

Soil and groundwater monitoring is gone, "with the exception of any monitoring that is necessary to protect human health and ecological receptors," the decisions say.

Those efforts must resume by Sept. 30, the only suspensions with a sunset date.

"We didn't want to create an expectation amongst industry that (the suspensions) couldn't be lifted at any time," said Foy.

In-situ oilsands operations no longer have to conduct any wildlife monitoring, including research programs and population estimates. That includes remotely operated monitoring, although bird deterrents must remain in place.

Reclamation and wetland monitoring is also suspended, as are research requirements.

The Opposition New Democrats suggested the pandemic was being used as a cover for changes the industry has long sought.

"This has nothing to do with COVID-19,” said environment critic Marlin Schmidt. “This is a sneaky and underhanded attempt by Jason Kenney and his UCP government to push their outdated and extreme ideological agenda forward under the shadow of a pandemic.”

Mel Grandjamb, chief of the Fort McKay First Nation, said earlier this month that the oilsands decision was made without consultation, despite his band being in the middle of the region.

The federal and Ontario governments have suspended requirements to report data because of COVID-19, but it must still be collected.

Keith Stewart of Greenpeace Canada has said his group isn't aware of any other jurisdiction in the world that has gone as far as Alberta to roll back environmental protections during the pandemic, including the United States under President Donald Trump.

"We have requirements at the AER that are world-leading. Other jurisdictions might not have the same."

This report by The Canadian Press was first published May 21, 2020

waiting to see how Albertans

waiting to see how Albertans respond to this move. Or is it known outside of this on line progressive news source at all? Cant see the Edmonton sun publishing the enviro costs can you?

unless and until Albertans rebel in a serious way they and all living things in that benighted province are going to die and suffer .....and blame it on the liberals probably.
I feell bad for progressives in that wilderness. But then I live in Barrie, the only place east of Winnipeg that had a reform mp. So I actually know how that feels. Hell local farmers' group LOVES their neo nics. Will have to tear that poison from their cold dead hands. and shut your treehugger mouth girlie

This is extremely disturbing

This is extremely disturbing news. My son lives in Alberta so this is another worry...Yes, what will it take for Albertans to speak up against this?! Shame on Jason Kenney government!

Following the Martin Foy’s (AER) logic that...”These activities were moving a lot of people from jurisdictions that maybe were a higher risk to smaller communities and potentially putting those communities at risk” only makes any kind of sense if you apply the same thinking to the engineers, electricians, pipe fitters and everyone else coming and going to these worksites. The AER’s Logic is mind-boggling. Their logic defies logic.

The AER simply granted the balance of the wish-list Tim McMillan and CAPP were petitioning the federal government for and were denied. Any federal stimulus funding should be tied to proven environmental performance and compliance with the Approvals to operate and the legislation that underpins those authorizations, not default to “trust us, we can police ourselves”. You can’t report on data you haven’t gathered. Any more noise about how robust Alberta’s environmental requirements are is laughable, notwithstanding the laws exist. The UCP merely chooses to use them selectively.

Once again Kenney, the UCP, and the AER have shit the bed while they continue to sell Alberta by the pound.