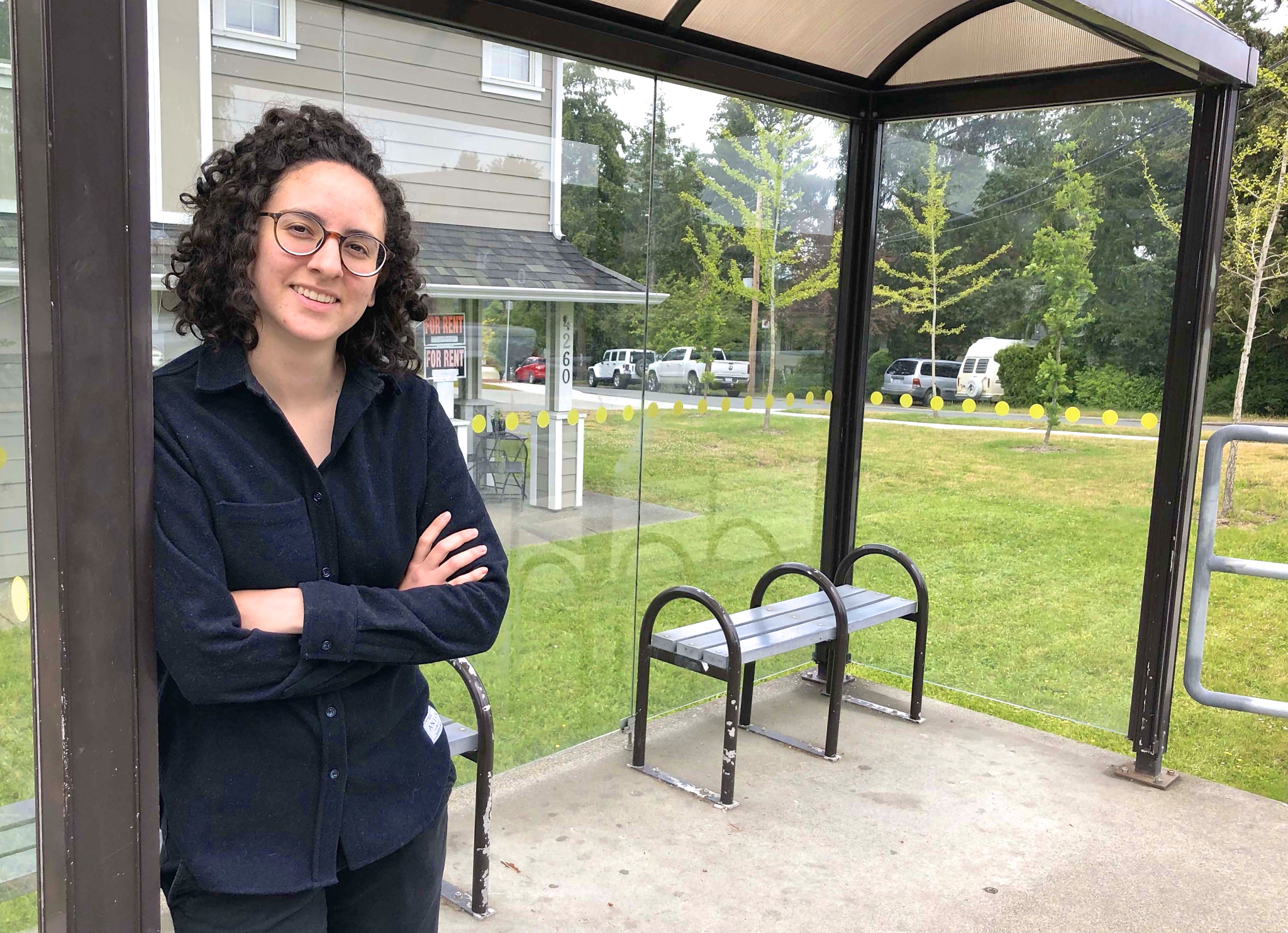 Community planner Ericka Amador researched the feasibility of a community-led bus on Quadra Island as one possible way to address the public transit gap in the rural community. Photo courtesy Ericka Amador
Previous story
Next story

Residents living in isolated communities without public transit and no access to or desire to own cars always face challenges getting to medical appointments, work, essential services and in maintaining social connections.

But the COVID-19 crisis is driving up the risks while simultaneously curbing traditional workarounds that rural residents rely on to navigate the lack of transit.

“I don’t have a car, and it’s never been an issue because hitchhiking was such an easy way to get around,” says Cortes Island resident Kristina Purcell.

“But now with COVID, I don’t know how to get to the ferry or across Quadra (Island),” Purcell said, adding she typically used to hitch rides across the neighbouring island to get to town.

Purcell has lived eight years on Cortes Island, located off B.C.’s west coast and two ferry rides away from the nearest city of Campbell River on Vancouver Island.

“I’m finding it much more challenging to go Campbell River for medical appointments or to pick up stuff,” she said.

“Now, I try to co-ordinate with someone who is going who is comfortable with me in their car.”

Purcell doesn’t own a vehicle because she grew up in a city with public transit, but managed on Cortes in the past through a combination of biking, walking and flagging rides.

“I just never had a car or felt the need for one,” she said. “But, I’m feeling the need more now.”

“I don’t have a car, and it’s never been an issue because hitchhiking was such an easy way to get around,” Cortes islander Kristina Purcell on how lack of transit and Covid-19 is making getting to "town" for critical services or goods a challenge.

Longtime Quadra resident Mike Windrim used to regularly transport people across the island. But not anymore.

“Since the day I became a resident, I would never pass a hitchhiker on Quadra if I had any room for them. It was a point of pride for me,” Windrim said.

“Since the pandemic arose, I have not once risked picking anyone up. I simply have too many pre-existing conditions.

“I do feel bad about it, but I just can't afford to make a mistake.”

Quadra and Cortes, like other ferry-dependent island communities or many isolated rural populations, fall outside the traditional public transit model typically based in cities.

“Lots of small communities might not fall under the BC Transit umbrella due to a combination of politics and community priorities,” said community planner Ericka Amador.

“So, alternative transit options are often born of necessity and by grassroots movements because the community can’t convince local government that transit will be successful or sustainable locally.”

Amador researched the feasibility of establishing a community bus on Quadra Island for her thesis for her master's degree at Vancouver Island University (VIU).

The study examined the social and economic factors and transit needs on Quadra, and in part on Cortes, and looked at how other island communities successfully developed a community bus service.

In particular, Amador explored the Gabriola Island community bus system, known as GERTIE, as both islands have similar populations, demographics and both are just a short ferry ride away from a city with public transit.

As a result, Amador suggested Quadra Island explore the idea of running a small 20-passenger bus on a circular weekday route five times a day and have it connect to busy BC Ferries commuter sailings at the two terminals.

The proposed route would do a loop along West Road and Heriot Bay Road between Quathiaski Cove and Heriot Bay and be timed to connect with Campbell River and Cortes Island ferry sailings.

The net cost of running the service would be $53,600 annually, not including the one-time cost of $40,000 to purchase the bus, according to the study.

The fares would be $2 for one-way ticket, with an anticipated ridership of 4,500 rides annually based on five passengers per hour as demonstrated on similar systems. Based on these figures, its annual revenue is estimated to be $8,600.

The costs of initiating and running a community bus are significant, but other island communities have succeeded in overcoming the financial challenges, Amador said.

A number of B.C. Gulf Islands (Galiano, Mayne, Saturna, Pender and Gabriola) have established some form of micro-transit to address gaps, Amador said.

“Most public transit is heavily subsidized,” she said.

“Each community needs to determine what level of subsidy it's comfortable with.”

In other community bus systems, grants and donations make up large part of the operating revenue, she said.

Gabriola’s community bus fare revenue is approximately 15 to 20 per cent of total revenue since its inception in 2013, her study found.

The system had significant community support and after three years, held a referendum to partially fund the system through community taxes.

A community based micro-transit system often considers the environmental and social value, as well as the economics, noted Amador.

Seniors who can’t (or don’t wish) to drive, youth, people with low incomes, as well as folks who want to get out of their cars for environmental reasons, are potential riders of a Quadra system, she said.

Not to mention tourists, cross-island passengers to Cortes, or commuters on Quadra going to Campbell River.

Should Quadra want to explore a community bus model, the next step is to do broad form consultation to gauge local support and confirm the results of her study, Amador said.

The success of local micro-transit projects depends on community drive, she said.

“From my research, it looks like the deciding factor is an interested group ... usually a community organization, or a group of folks who either want to reduce carbon emissions or have a greater purpose to get behind the cause and make it happen.”

Claire Trevena, North Island MLA and B.C.'s Transportation and Infrastructure minister, agreed community initiative is key to securing funding either under the BC Transit model or to establish a community bus.

Trevena said she recognized there was a lot of frustration on the islands about the lack of public transit.

“But the community needs to show that there is the passenger base, the commercial base … before BC Transit will look at it.”

The B.C. government has supported the establishment of some micro-transit options to connect small Indigenous communities to Highway 16 in northern B.C. ­­— infamously known as the Highway of Tears due to the high numbers of disappearances and murders of Indigenous women along the route.

However, there is no dedicated provincial funding to help rural communities with the costs it takes to get a community-led transit project underway, she said.

“We don’t have a pot of money anywhere saying this is going to small communities to help them develop a public or micro-transit system,” Trevena said.

But pointing to the GERTIE system and other initiatives on north Vancouver Island, she noted community agencies, groups and service providers often launch an initiative that later evolves into a more formalized publically funded transit system.

“As government, we look at smaller community needs, but our main focus is the broader public transit (system)” said Trevena.

Regardless, smaller rural communities can still seek support from local government or the province, she said.

“There’s always the opportunity of conversation through the ministry of Transport or Municipal Affairs or the regional district about how best to support the community,” Trevena said.

B.C. rural communities like Quadra and Cortes islands are not exceptional in their struggle with lack of public transit.

Even critical private modes of transport for rural communities find it tough to survive. The only coach company operating on Vancouver Island north of Campbell River wants to shutter the route.

Citing insufficient revenue and ridership, Wilson’s Group, which took over the Tofino Bus Service route to Port Hardy, is applying to the Provincial Transportation Board (PTB) for permission to drop the route.

Plus, many northern B.C. communities lost service from Greyhound Canada in 2018. Covid-19 dealt Greyhound another blow with the company announcing mid-May that it was suspending all intercity service across Canada.

To stem some of the isolation felt by small communities not connected to one another, the province launched BC Bus North, which offered less frequent transport between some of the larger community centres, such as Prince George and Prince Rupert.

With the exception of BC Bus North, the province doesn’t typically fund intercity buses and the PTB will examine how to best to keep North Island communities connected to Campbell River, Trevena said.

“It’s up to the PTB ... to decide whether it will accept the (Wilson’s) application or not,” she said.

“I know it’s a huge issue to get from Port Hardy down, and the PTB is aware of that gap in service. And they’ll obviously be looking at options for people when they make that decision.”

Cortes resident Romina Jones gets around the island on her electric bike.

“I’ve never had a car in my life. It’s not a lifestyle I want to partake in,” Jones said.

However, when she moved to Cortes a decade ago, there was a private company running a shuttle across Quadra Island to Campbell River that she could take to medical appointments and to pick up items that couldn’t be delivered.

But the shuttle ceased service about three years ago, and no other private operator has emerged to fill the gap.

“Without the Cortes connection, it’s very challenging,” said Jones, adding now she shops online more when she can.

“It’s restrictive and I have to find ways to get a ride, and that’s not as easy with COVID.”

She would love to see some sort of regular transit return, she said.

“Any type of return would be helpful,” Jones said, adding it would be useful if governments offered subsidies to small companies to make a transportation service more viable.

“It’s odd that it doesn’t exist with climate change, and so many initiatives to get people out of their vehicles,” said Jones.

By Colin Perkel | News, Politics | May 8th 2020
Coronavirus in Canada

Green New Deal must include a transportation transformation