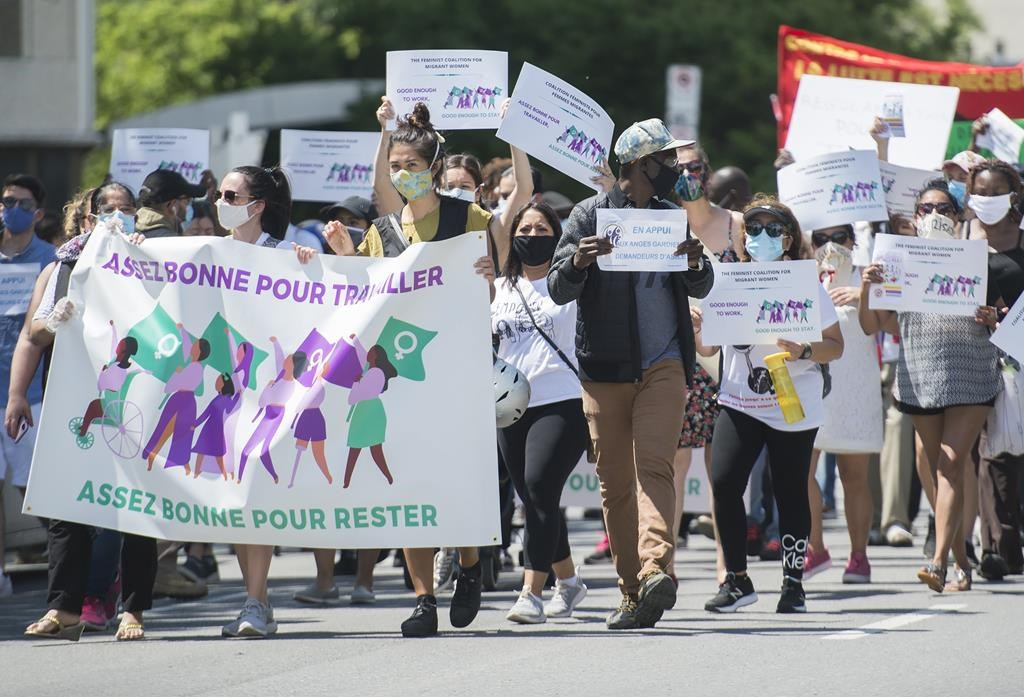 People hold up signs during a demonstration outside Prime Minister Justin Trudeau's constituency office in Montreal, on Saturday, June 6, 2020.File photo by The Canadian Press/Graham Hughes
Previous story
Next story

The event, sponsored by the Migrant Rights Network, featured a series of farm workers, caregivers, construction workers and others who expressed the difficulties of living through the COVID-19 pandemic without the government support given to Canadians.

"We are raising our voice because the COVID-19 virus has laid bare the crisis caused by capitalism, racism, climate change and war," spokeswoman Sarom Rho said during the one-hour event.

Rho said the majority of migrants are paid low wages, and face many other challenges.

"Canada's corporations profit off of the intentional temporariness caused by a two-tiered immigration system," Rho said, adding that the novel coronavirus has hit migrants and poor the hardest.

"Without access to emergency income supports, migrants have been working through the crisis without basic labour rights or health and safety protections. We are going hungry, we are homeless, we have lost our lives."

Without emergency income supports provided to Canadian workers, she says, migrants are going hungry as they struggle to survive.

Rho said migrants are calling on Trudeau to live up to his promise to do better to fight racism.

"So today we say to him, Prime Minister Trudeau do better by ensuring full immigration status for all."

That would provide health services including hospitalization and access to doctors, worker protections against discrimination and abuse along with access to permanent wage increases and paid emergency leave.

It wants access to community supports such as food banks, emergency shelters and other services and an immediate moratorium on detentions and deportations.

The activist group launched the one-day event by supporting efforts to defund, disarm and dismantle police over racist policies following recent deaths at the hands of police, including George Floyd and several Canadians, such as Rodney Levi, an Indigenous man in New Brunswick.

"We are in the midst of a massive anti-racist uprising against police and anti-Black police violence, a groundshifting rebellion led by Black women and youth."