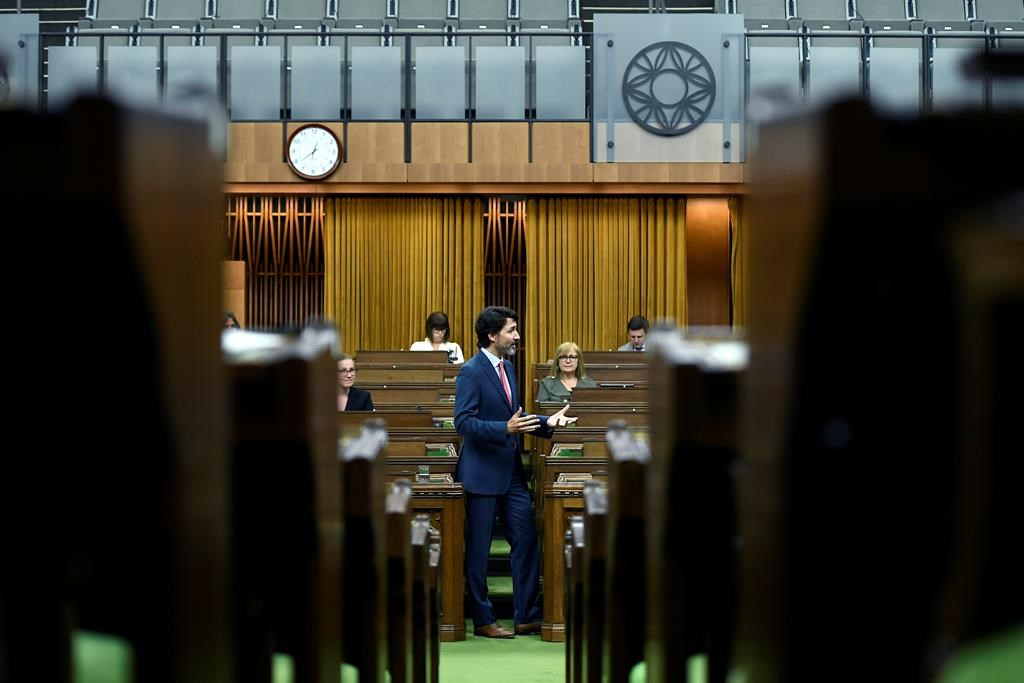 Prime Minister Justin Trudeau rises during a meeting of the Special Committee on the COVID-19 Pandemic in the House of Commons on Parliament Hill in Ottawa, on Tuesday, June 16, 2020. Photo by The Canadian Press/Justin Tang
Previous story
Next story

Prime Minister Justin Trudeau faces a confidence vote today but there's little chance his minority Liberal government will fall in the midst of the COVID-19 pandemic.

Trudeau assured the support of New Democrat MPs by announcing Tuesday that his government is extending the $2,000-a-month Canada Emergency Response Benefit for another eight weeks.

In return for extending the CERB, a spokeswoman for the NDP, Melanie Richer, said New Democrat MPs will vote in favour this evening of the supplementary spending estimates — some $87 billion in planned, primarily pandemic-related, government spending.

Only about $6 billion actually involves new spending; the other $81 billion has already been approved by Parliament.

Because the Liberals hold only a minority of seats in the House of Commons, they need the support of at least one of the main opposition parties to pass legislation and avoid defeat on confidence votes.

Any bill involving government spending is typically considered a confidence matter. A government that fails to win a vote of confidence in the Commons is deemed defeated, which would plunge the country into an election.

The NDP's support for the supplementary estimates precludes that scenario for today at least.

"The prime minister says he has heard us and is extending support through CERB through the summer," NDP Leader Jagmeet Singh said in a statement.

"This is what we were calling for in the short term. We'll keep working to make sure help is there for Canadians who need it in the long term."

Bloc Quebecois Leader Yves-Francois Blanchet also sounded Tuesday like his party would not vote against the spending estimates, although the Bloc has recently joined the Conservatives in demanding a full resumption of the Commons, among other demands, before supporting any government initiative.

"No one wants to send 20 million Canadians to line up to vote while we are still in the midst of a pandemic," he said.

Trudeau announced Tuesday that the CERB will be extended to a maximum of 24 weeks instead of 16 weeks for people who lost their jobs or saw their hours slashed due to the pandemic.

The extension means the first cohort of applicants who signed up in April and were set to max out their payment periods in early July, won't have to worry if they have no jobs to go back to over the summer or are unable to work because their health is precarious.

While the supplementary estimates seem poised to pass, there is still no resolution to an emergency aid bill that stalled last week without sufficient opposition support.

That bill included measures to deliver a one-time, tax-free benefit of up to $600 to Canadians with disabilities. It would also expand the wage subsidy program to include more seasonal workers and businesses and would impose fines or jail time on Canadians who deliberately defraud the CERB program.

The government needed unanimous consent to quickly pass the bill in a matter of hours last Wednesday but none of the opposition parties would support it. It then offered to deal with the disability benefit separately, which was supported by the NDP and the Bloc but the Conservatives blocked that idea.

The bill is still on the order paper and the government could theoretically try again today but officials say that isn't in the cards.

Instead, the government is now trying to work out other ways to deliver the disability benefit and other measures without needing legislation.

So the minority government's

So the minority government's spending continues unabated and unchallenged while the economy limps and liberty is curtailed.

For a coronavirus with the exact same mortality as the traditional seasonal flu.