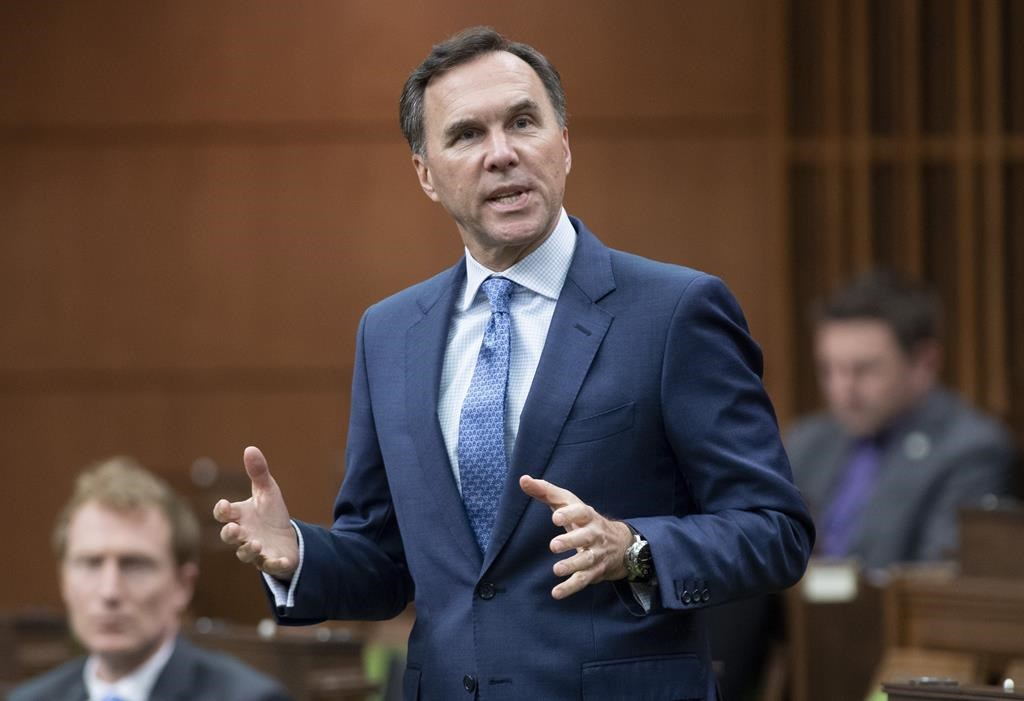 Finance Minister Bill Morneau rises during Question Period in the House of Commons in Ottawa on May 26, 2020. File photo by The Canadian Press/Adrian Wyld
Previous story
Next story

The Canadian Association of Petroleum Producers says if bridge loans for smaller oil and gas companies aren't ready to flow soon some companies will have to turn to less-safe options to survive the COVID-19 slowdown.

It has been more than two months since the Business Development Bank of Canada and Export Development Canada began working on bridge loan programs to help hundreds of Canada's oil patch companies but there is still no certainty as to when the money can flow.

"We understand the importance of liquidity," said Natural Resources Minister Seamus O'Regan in an interview with The Canadian Press. "We want to get it out the door."

Ben Brunnen, CAPP's vice-president of fiscal and economic policy, said as of right now not even one company has been approved for a bridge loan. Officially they aren't even able to apply yet, with the agencies telling companies expressing interest to wait for more details.

Brunnen said he knows the two agencies are working hard to get the terms of the loans finalized but that it is taking a very long time. Both agencies are looking at programs that backstop loans from a company's normal bank or lending company, which Brunnen says is making the design a little more complex.

"And as a result companies are increasingly concerned that liquidity won't come in time," he said.

Nerves are so frayed, and information about the programs so scarce, that last week, Conservative natural-resources critic Shannon Stubbs briefly couldn't find even the two-paragraph note on the BDC website about its program and took to Twitter to ask if the government had decided to cancel them.

It turned out the information had just been moved to a different spot, but Stubbs is inundated with calls and emails from nervous constituents in her Alberta riding, some of whom are barely hanging on while they wait for help.

"It's mind-boggling that this is just allowed to drag on and on and on," said Stubbs. "Every day that passes without financing being available is a huge risk and a huge threat to the future of these companies and to the whole sector."

Global demand for oil plummeted by more than 16 million barrels a day this spring, as planes were grounded, cruise ships moored and freeways emptied of commuters who were suddenly forced to work at home, if they still had jobs at all.

The Canadian Association of Petroleum Producers says if bridge loans for smaller oil and gas companies aren't ready to flow soon some companies will have to turn to less-safe options to survive the COVID-19 slowdown.

At the same time, a production war between Saudi Arabia and Russia saw supplies increase, which sent market prices for oil into a tailspin. For brief periods in April, some oil futures were trading in the negative, meaning the people normally selling oil were paying others to take it away.

The toll on Canada's fossil-fuel sector has been drastic. Companies reduced oil output by more than one-sixth, exploratory drilling plummeted 92 per cent, and capital spending, predicted in January to grow for the first time in years in 2020, is now being reduced by billions of dollars.

Stubbs is particularly angry that Finance Minister Bill Morneau said on March 25 that help was coming in "hours, potentially days" but that 84 days later help is still hypothetical.

O'Regan cringes a little as he remembers Morneau's words, and says he doesn't think it will be long now until the programs are ready but "I'm not going to say days or weeks or anything."

O'Regan also said it's not accurate to say no money has gone to help the industry because a number of fossil-fuel companies did take advantage of the federal wage subsidy, which covers up to 75 per cent of workers' pay (up to $847 a week) for companies that saw revenues fall more than 30 per cent because of COVID-19.

Brunnen agreed with O'Regan on that point, saying the subsidy has helped oil and gas companies keep people on their payrolls, estimating about $300 million has been made available to the industry through that program.

He also said banks have been helpful by deferring the usual May renewal period for reserve loans by at least one month, as companies wait for the federal aid programs.