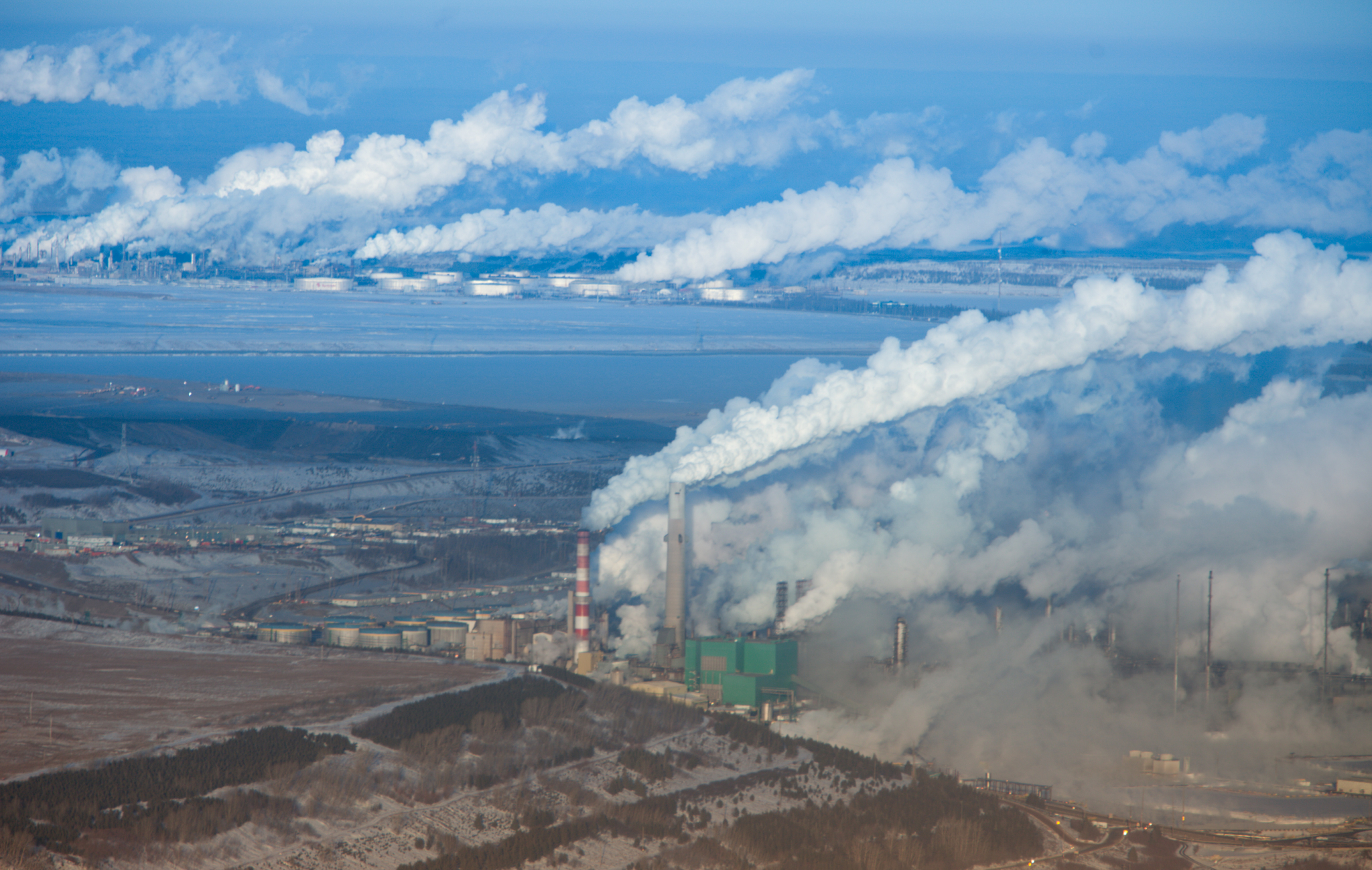 Pollution from oilsands facilities near Fort McMurray wafts into the skyline on Feb. 11, 2012. Photo by Kris Krug on Flickr
Previous story
Next story

As the oilpatch awaits a bailout from the federal government, the price of Canadian crude plunged to a new historic low of US$5 per barrel Friday.

The industry has been left staggering in recent weeks thanks to the double whammy of the COVID-19 pandemic, which has sent global markets into a tailspin, and a price war between Saudi Arabia and Russia. Now a barrel of Western Canadian Select (WCS), the Canadian benchmark, is going for roughly the same price as a Big Mac.

“This is really unknown territory,” said Warren Mabee, the director of the Institute for Energy and Environmental Policy at Queen’s University.

The abrupt spiral of the oil and gas sector, which contributed 11 per cent of Canada’s gross domestic product in 2018, has broad and dire consequences ⁠for the federal and Alberta economies. Already, oil producers are cutting spending plans and analysts are forecasting that production will need to be slashed, with WCS closing at US$5.06 per barrel Friday.

The drop blows a hole in Alberta Premier Jason Kenney’s budget, which relied on optimistic forecasts of $58 per barrel. On Friday, Kenney told Albertans to expect "what will likely be the largest single contraction in our economy in history," and recalled the legislature for Tuesday to discuss ways to offset the economic blow.

In Calgary, where many Canadian oil and gas companies are headquartered, the sector is in “survival mode,” said Sandip Lalli, the president and CEO of the city’s chamber of commerce.

“The price per barrel does carry a sentiment in town,” she said in an interview Friday. “Five dollars? Nobody wants that.”

Mabee said he wouldn’t be surprised if Canadian crude prices briefly go negative ⁠— a scenario where producers are paying people to take away product. And there’s likely a long way to go before markets begin to rebound, he added.

“For some companies, unfortunately, it will be a death blow,” Mabee said. “They won’t have the money to continue with their operations … For big companies, it definitely requires major restructuring.”

Industry’s hopes are currently riding on the multibillion-dollar federal funding package, set to be unveiled any day now. Details haven’t yet been released, but Mabee said it’s likely aimed at preserving jobs and helping companies stay afloat until the crisis subsides ⁠— whenever that may be.

"For some companies, unfortunately, it will be a death blow," said Warren Mabee, the director of the Institute for Energy and Environmental Policy at Queen’s University.

Canadian oil already sells at a discount compared to the North American benchmark, West Texas Intermediate. That’s because it’s harder to process, and must be transported much farther by rail or pipeline to reach refineries that can handle it.

And the Alberta oilpatch was already coming off a rough couple of years. In 2012, Canadian crude sold for over US$100 per barrel; since the last price crash in 2015, it has rarely fetched more than $50.

Long-term, carbon-limiting policies meant to address the accelerating climate crisis will mean tremendous change ⁠— and likely decline ⁠— for the oil and gas industry, analysts say. But the oilpatch had also hailed 2020 as a tentatively positive year, forecasting a boost to crude prices.

Then came the price war. With demand for oil falling as economies around the world ground to a halt to battle the COVID-19 pandemic, Saudi Arabia and Russia began a price war earlier this month when they couldn’t agree on production cuts. Both countries are now flooding the market with excess supply, causing prices to take a dramatic dive.

“One (crisis) is playing off the other,” Mabee said. “Prices, which were already low, just collapsed.”

Eventually, Mabee said, countries will resolve the COVID-19 problem within their own borders and begin using petroleum again as their economies kick back up. But it isn’t clear when that will happen ⁠— after months of battling the novel coronavirus, China has only just begun getting back into gear.

The federal government’s bailout package, whatever it contains, will determine much of what happens next. Environmental groups and other critics have asked the government to ensure it isn’t propping up a sunset industry.

To be effective, Mabee said the federal government should ensure the funding comes with strings attached. Officials have a rare opportunity now to ask the oil and gas sector to figure out different uses of petroleum that mesh with our low-carbon future ⁠— something that companies are open to but are sometimes distracted from, as there are still profits to be made right now, he added.

“Let’s not be shortsighted,” he said. “The writing is on the wall. The whole petrochemical industry will change in the coming decades.”

At the very least, the package will give oil and gas producers some level of certainty about how to move forward in the near future, Lalli said. It’s been positive to see the Alberta and federal governments working together, a rare event under current leadership, she added.

But in a bigger sense, Lalli said she wants to hear more about a long-term plan that will give Alberta's and Canada’s economies stability and resiliency. Though other sectors are still faring well, commodity prices have long been an Achilles heel for Alberta, she added.

“We’re hearing stabilization, but I’m not getting a lot of questions about what’s the strategy for Canada to win at this,” she said.

“Our economy has to come back.”

what the feds do to bail out

what the feds do to bail out big oil will be Canada's equivalent to Obama bailing the banks without demands for regulation in 2008 and will be the biggest legacy of Morneau and Trudeau in the post crisis analysis. IF they don't make big requirements for money going to worker retraining, oil well clean up, maybe refinery building for non car related products... they will be in the naughty column of history.
strings attached that give jobs for clean up and vented gas mitigation for instance are critical That is actually helping the industry rather than enabling it. This is where their claim to care about climate change action is going to get proven or more likely exposed.

Instead of using taxpayers'

Instead of using taxpayers' money trying to resurrect a moribund industry we should spend it helping the people that have lost their livelihoods. Projects like fixing our orphaned and abandoned wells could employ many of those people for decades. Switching our economy to sustainable energy could employ many more people.

This short term price collapse makes the economic case for pipelines that much stronger. We cannot remain dependent solely on the US for access to the world market. We must be able to get our products to market ourselves, to put a bit more Canada out there in the world.

We DO have access to world markets. The existing Trans Mountain pipeline and tanker terminal in Burnaby provides it. The tanker terminal is capable of filling over 100 large tankers a year, or more of the smaller ones. It has never come close to these numbers. In 2019 there were only 12 tankers loaded there.

Give money to the workers

Give money to the workers losing their jobs instead of the companies in a dying industry. Our people and our planet will be better off.

When the Canada Crude price

When the Canada Crude price hits $0, is it possible to go into negative numbers? Like, could we extract $ from company profits (sort of a "tax") and use that money to remediate at least some of the on-going damage Canadian Crude extraction has done to Canada, our people and the world?

Betsy, it probably already is

Betsy, it probably already is negative, when you do an honest accounting of expenses.

Keep in mind that so-called "dilbit" is bitumen that has been diluted enough to be able to flow. Otherwise, it is more like asphalt.

The "diluent" that is used probably already costs more than the market price for dilbit.

There was a report at

There was a report at Oilprice.com that theorized that even 'good' oil, conventional oil as opposed to bitumen, might hit $0. The reasoning is that demand is cratering, down about 20 million barrels per day. At the same time there's a glut of conventional oil, so much that oil storage ashore is nearly full and oil producers are hiring supertankers to store the overflow. There are even tankers full of jet fuel sitting at anchor and that's one fuel that does have a 'best before' date, apparently three months. The article suggested that producers might find it necessary to give that surplus oil away if only to avoid having to shutter their oil production, a way to keep the rigs and refineries on life support.

What does this mean for high-carbon, low value bitumen? It means that former Bank of Canada governor turned Bank of England governor and soon to be the UN expert on the economic aspects of climate change, Mark Carney, was right when he warned that bitumen and coal would soon be "stranded assets." We're entering a world in which these worst of the worst resources become worthless. It's a reality that our premiers and prime ministers have blindly rejected and we'll pay for their foolishness.