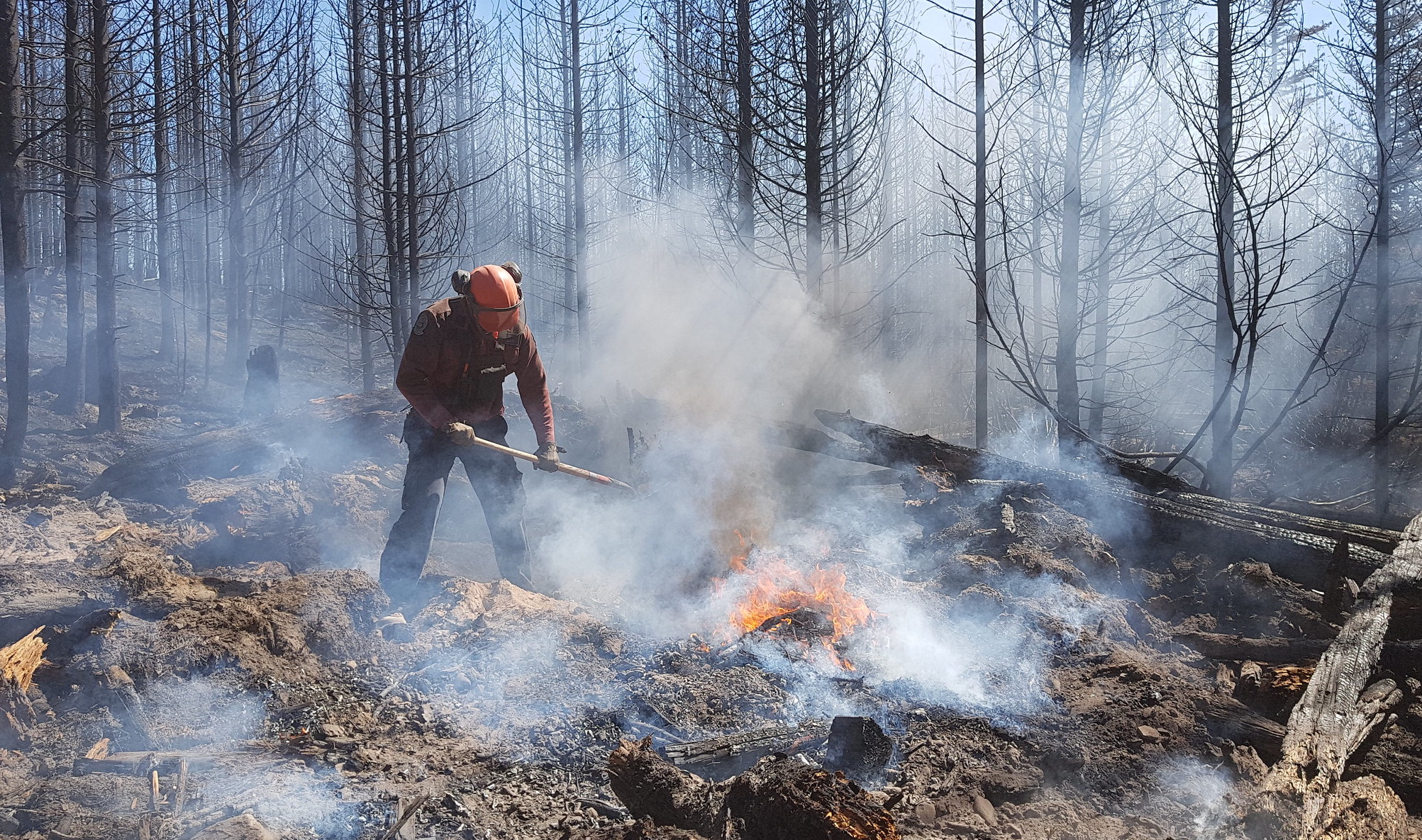 Many communities in northern Quadra Island fall outside the fire department's protection zone, but residents are torn on the best way to safeguard themselves from wildfire, according to a recent survey. Photo: courtesy of BC Wildfire Service.
Previous story
Next story

Dalyce Dogterom recalls the night a neighbouring house in Quadra Island’s remote community of Bold Point caught fire a couple of years ago.

She couldn’t see the blaze from her property, but the night sky glowed red, she said.

Residents’ calls to 911 brought out the police and the ambulance service to treat the residents for smoke inhalation.

But the Quadra Island Fire Department (QIFD) wasn’t called out because fire protection services in the less densely populated and more isolated northern part of the island falls to the BC Wildfire Service, Dogterom said Monday.

The provincial wildfire service does not fight structure or residence fires, but rather forest fires.

As such, the wildfire service did not respond to the blaze and the home burned to the ground, said Dogterom.

“It was lucky nobody was killed,” she said about the December 2017 fire.

“Neighbours had to work on hot spots the next day to prevent it from spreading into the forest underground,” Dogterom said.

It was only luck that conditions were not as dry as they’d been in the summer when B.C. experienced its worst wildfire season on record, she added.

A total of 1,300 fires tore through the province, displacing 65,000 people and burning more than 1.2 million hectares of land that season.

“We live on a small island and fire travels real fast," Quadra Island resident Dalyce Dogterom on her desire for new burning regulations to safeguard the island from wildfires.

“If (the house fire) had occurred in summer, we would have been running for our lives,” said Dogterom.

“We live on a small island and fire travels real fast.”

Dogterom believes steps need to be taken to safeguard all of Quadra Island from wildfires.

But the outstanding question is how best to do that.

For the past couple of years, in response to a petition launched by Dogterom that garnered more than 500 signatures, the Strathcona Regional District (SRD) has been exploring the possibility of enacting burning regulations for residents and property owners in the northern part of Quadra Island.

Dogterom argues for open burning regulations that mirror the QIFD rules in place on the south end of Quadra.

Having two sets of regulations on the island is confusing, and they need to be unified for effective fire prevention, she said.

Currently, North Quadra falls under regional burning regulations for things like campfires and debris fires, as determined by the BC Wildfire Service.

But according to results from a recent SRD survey on potential burning bans, and fire suppression in general, north Quadra Island got a limited response rate and mixed results.

The SRD put the survey online and mailed it out to about 240 property owners in northern Quadra Island, but only got 84 responses, along with 20 responses from residents in south Quadra.

Residents of the north communities of Granite Bay, Bold Point, Open Bay, Copper Bluffs, and Village Bay Lake were asked if they were satisfied with the current burning regulation service.

Sixty-four per cent of respondents indicated they were satisfied, while 27 per cent said they were not, according to the survey results.

Most of those surveyed in the communities of Granite Bay and Village Bay Lake were satisfied with the current situation.

But most respondents from Bold Point, Open Bay and Copper Bluffs — farther south on the island in varying degrees — indicated they were not.

Some residents who were against new SRD burning regulations said they didn’t want new property taxes since they have the provincial service.

Others also suggested there was more rain on the north of the island, and many larger or water access properties have no way to dispose of debris aside from burning, and money for a new service would be better spent on locals to purchase their own fire suppression equipment.

Some respondents who wanted new regulations also said they wanted a fire suppression service funded through the SRD.

While others thought the whole island, including Crown lands, should be under a single regulation because of higher fire risk due to concerns around climate change, adding that cabin owners, tourist and campers were not following fire regulations.

“There was a very wide variety of opinion,” said Koopman.

“We got everything from stay out of our lives … to we want a fire department in the north, and we’ll pay whatever it takes to get that.”

The SRD did not limit survey questions strictly to the burning regulations issue because the district wanted a wider sense of residents’ opinions around fire suppression services in north Quadra, he added.

“We didn’t want anyone to feel anything was off the table,” Koopman said.

But with 27 per cent of those surveyed indicating they aren’t happy with the current fire regulations and service model, staff have recommended the SRD board approve a report outlining next steps for engaging with north island residents on the issue, said Koopman.

That might mean setting up an advisory committee or neighbourhood meetings, he said.

“Our process right now is to determine what is possible and feasible, and probably most important to the residents, what is affordable,” Koopman said.

“Getting together with the communities to try to decide what is that level of service they are looking for.”

It’s a complex issue and opinions around fire regulations and suppression tactics are likely to be different for each community and residence, Copper Bluffs resident and former firefighter Rolf Erdmann said.

“I don’t have a window into everybody’s situation on the north island,” Erdmann said.

However, he thinks harmonized regulations make sense, and he’d like to see residential fire suppression in some form across the island.

“In my own opinion, it’s one island and should have one fire department,” said Erdmann.

“I recognize there is a feasibility problem there … but ideally, there should be some attempt made to work toward that eventuality.”

The SRD continues to permit development outside the south island’s fire protection service zone and the resident population and number of visitors in the north is growing, he said.

To a certain extent, the problem is a planning issue, he said.

“I’m not saying it’s a given that if you get a building permit somewhere outside a traditional (fire) service area that you should expect services to come with it,” Erdmann said.

“But the more you develop an area … the community, regional district and the province can’t just absolve themselves from providing service.”

The onus shouldn’t be on residents telling the district what they’d be willing to pay, he added, noting it’s a community-wide decision.

“It’s should be up to the SRD to develop reasonable and practical improvements on services … rather than polling residents on costs,” Erdmann said.

“Basically, the reality of it is … it would take half an hour for the fire department to drive out to me, and my house would be burned down,” Doherty said.

At best, the fire department might be able to keep the fire from spreading, he said.

Through NEPP, community residents are encouraged to build ponds and get firefighting equipment like piss cans, hoses and pumps.

A phone network is set up so Bold Point residents can rally to put out fires early, Doherty said.

“We have the same size hoses and fittings, so we can work together,” he said.

But prevention and preparedness is what will provide the biggest return, Doherty stressed.

“The best thing we can do at the moment is invest a lot to FireSmart our properties,” he said.

“And really, until people do that, it doesn’t make sense to have a fire engine come up.”