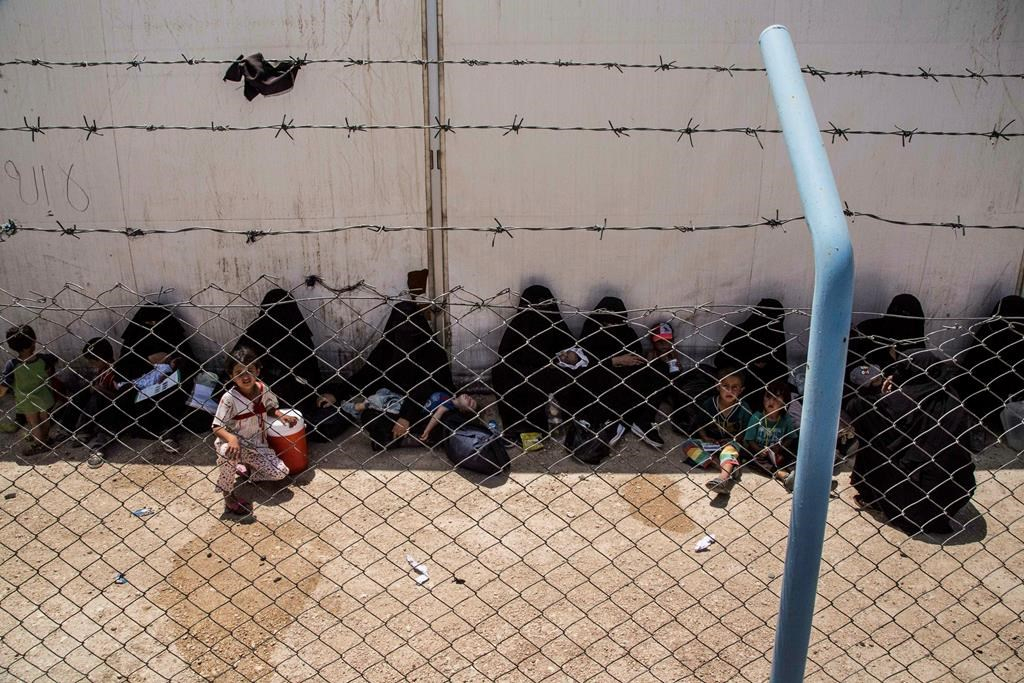 Women and children related to fighters of the Islamic State group wait to board buses and trucks, leaving the overcrowded al-Hol camp to return to their homes on June 3, 2019, in Hasakeh province, Syria. File photo by The Associated Press/Baderkhan Ahmad
Previous story
Next story

The federal government has been accused of violating its international human rights obligations by refusing to help dozens of Canadian men, women and children detained in squalid camps in Syria because of their suspected links to the Islamic State.

The accusation by New York-based Human Rights Watch is contained in a scathing report released Monday that calls on Ottawa to immediately begin bringing the detainees home — starting with the 26 Canadian children known to be in the camps.

One of those children is a five-year-old orphan known as Amira who was found on the side of a road last year after her parents and siblings were killed in an airstrike and whose case has been raised with the federal Liberal government in the past.

"The government of Canada is flouting its international human rights obligations toward Canadians who are arbitrarily detained in northeast Syria," reads the 92-page report, which included interviews with detainees, families and Canadian and foreign officials.

"The obligations that Canada has breached include taking necessary and reasonable steps to assist nationals abroad facing serious abuses including risks to life, torture, and inhuman and degrading treatment."

It went on to paint a disturbing picture of conditions in the camps, with food and clean water in short supply while disease and violence are rife. Children were seen drinking worm-infested water while "morality police" hunted women who criticized ISIL.

The Human Rights Watch report is the latest to take aim at the federal government when it comes to Canadians detained in northeastern Syria following the collapse of the Islamic State of Iraq and the Levant.

Ottawa has previously cited the lack of Canadian diplomats in Syria and safety concerns around sending officials into the camps where around 100,000 suspected ISIL members and their families are being held as reasons for not doing more.

Yet Human Rights Watch noted Britain, Denmark, Finland, France, Germany, Norway and the United States had all repatriated children, and in some cases their mothers, since October. That included 10 French orphans and children in June.

The federal government also recently helped 40,000 Canadians return home due to the COVID-19 pandemic, the organization said, including 29 from Syria. The 47 known Canadians in the Syrian detainee camps include eight men, 13 women and 26 children.

"Although Canadian authorities do not cite potential political fallout as a reason, in 2017 (Prime Minister Justin) Trudeau faced a backlash simply for supporting rehabilitation programs for Canadian (ISIL) suspects who return home," the rights group wrote.

The federal government has been accused of violating its international human rights obligations by refusing to help dozens of Canadian men, women and children detained in squalid camps in Syria because of their suspected links to the Islamic State.

"To be sure, the repatriations are not always popular," it added, noting an attempt to repatriate a Norwegian mother and child led to the collapse of that country's government. "But the vast majority of repatriations have taken place with little or no controversy."

The Canadian detainees in the camps administered by Kurdish-led organization include Mohammed Khalifa, who has been described as an ISIL propagandist, and Jack Letts, a dual British-Canadian national dubbed "Jihadi Jack" by British media.

The British government revoked Letts's citizenship last year. Neither the Liberal government nor the official Opposition Conservatives have expressed enthusiasm for returning him to Canada despite repeated pleas from his family.

Yet Human Rights Watch argued for repatriation as the best — and potentially only — way to hold Canadian ISIL members to account as there is no process in Syria to investigate and prosecute those suspected of crimes.

"None of the Canadians has been charged with any crime," it added. "Nor have the Canadians been brought before a judge to review the legality and necessity of their detention, making their continuing captivity arbitrary and unlawful."

At the same time, the group raised the question of whether Canadian authorities are withholding or limiting consular assistance from those in the camps because of their suspected links to ISIL, which it says would also violate international law.

While Trudeau expressed confidence last year in the RCMP to investigate Canadians who travelled to fight alongside extremists in Iraq and Syria, he said it is difficult to present the information gathered abroad in court as evidence of crimes.

The government is ensuring Canadian agencies have the necessary resources and opportunities to collaborate with foreign allies on such cases, he added.

An annual federal report on extremism last year said some 190 people with connections to Canada are suspected of terrorist activity abroad and, in addition, approximately 60 had returned.

A small number of the 60 returnees had come back from Turkey, Iraq or Syria but many who remain abroad were said to lack valid travel documents, find themselves on a no-fly list or fear being arrested on Canadian soil.

This report by The Canadian Press was first published on June 29, 2020.

Whilst normally supportive of

Whilst normally supportive of respect for human rights, I fear the notion of human rights is being abused here. These people left Canada and went to war for someone else. They chose to marry, to have children, in the midst of the hell on earth they created. Now they have been captured/defeated, they expect respect for the very rights they abused at an unimaginable level when they had power. I do not want them back in Canada. I do believe that if you leave Canada, and go to war for a regime that is at war with Canada, you have no further claim for support from Canada.