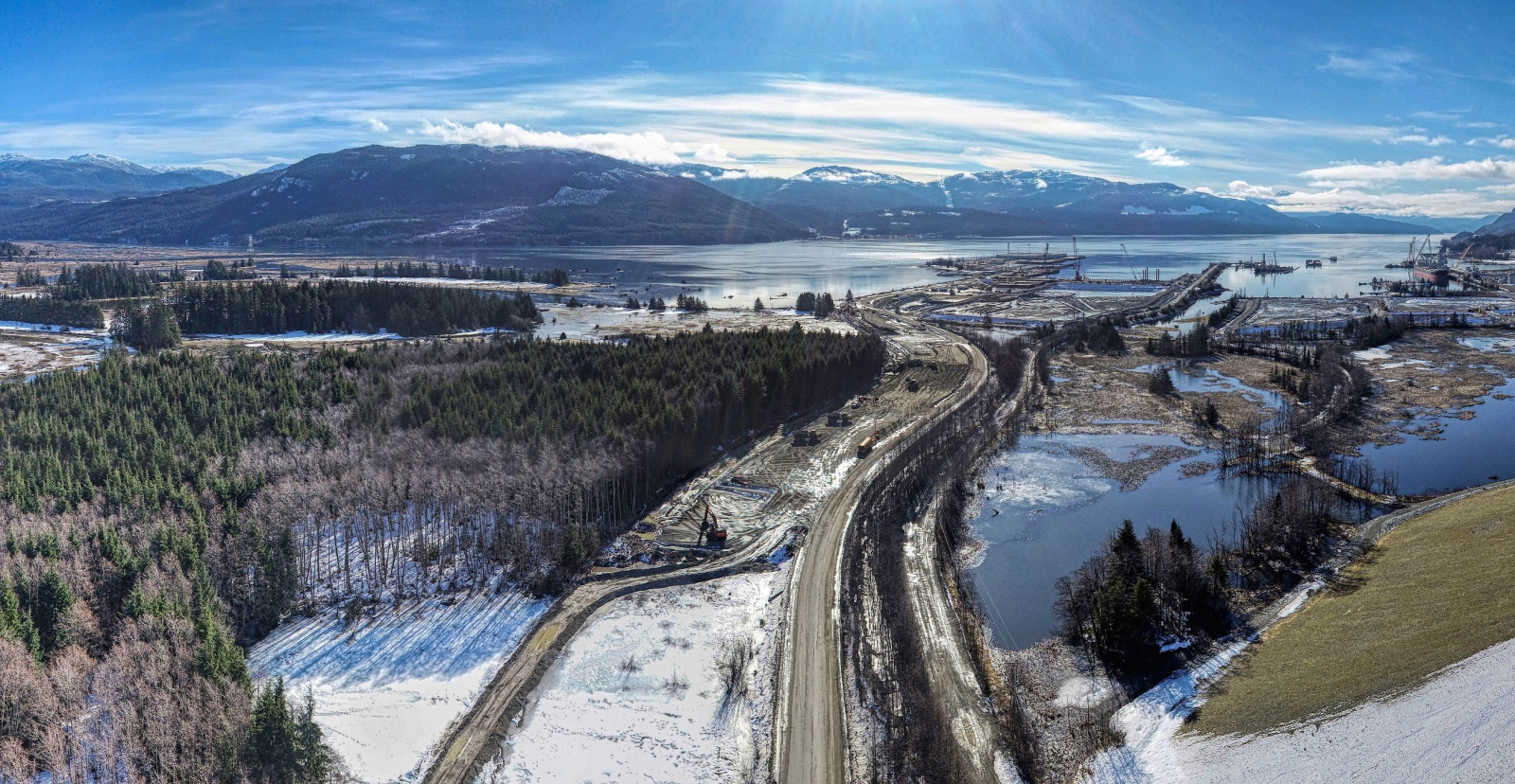 A new report is raising questions about the long-term viability of the liquefied natural gas export industry around the world as the Trudeau government continues to signal support for one such project in British Columbia.

The natural gas industry is facing multiple headwinds, from a collapse in demand due to COVID-19 disruptions, to competition from renewable energy sources, and protests against fossil fuel expansion such as those in support of Wet’suwet’en against the Coastal GasLink pipeline through B.C.

A global survey of LNG terminals released Monday by the San Francisco-based Global Energy Monitor research network outlines the central risk facing the hundreds of billions of dollars in sunk investments in LNG infrastructure: That some of these structures could become underused, or stranded, long before the end of their useful lives.

“LNG was once considered a safe bet for investors,” said research analyst Greig Aitken, one of the report’s five authors. “Suddenly, the industry is beset with problems.”

In media reports, the company backing the project, GNL Québec, cited the “current Canadian political context,” including “instability” from the rail blockades set up in support of Wet’suwet’en, as an explanation.

“The story of Berkshire Hathaway’s change of heart on LNG begins in British Columbia,” reads the survey, titled “Gas Bubble 2020.”

LNG Canada says the commitment by its joint venture participants to the $40-billion facility on B.C.'s coast "has not wavered," after a survey of LNG terminals found the industry is facing multiple headwinds and may no longer be a "safe bet."

The survey also refers to several other LNG terminal projects in Canada that have either been abandoned or are seeing delays, investment pullouts or no obvious progress in years.

This includes the cancellations of the proposed Aurora LNG plant and the Pacific NorthWest LNG plant near Prince Rupert, and the Malahat LNG project in the Saanich Inlet in 2017, as well as the Grassy Point LNG project on the North Coast of B.C. in 2018.

Another five projects have seen “no progress” in years, while three more are either delayed or have seen a work stoppage, the survey found. Globally, it said some projects that haven't yet broke ground for construction are now experiencing a “widespread pullback” in enthusiasm.

The Trudeau government has supported the construction of LNG Canada, a $40-billion LNG facility being built in Kitimat, B.C., to be fed by fracked gas delivered by Coastal GasLink. The project, which would liquefy the gas and then load it on ships to be exported to Asia, received $275 million in federal contributions.

Natural Resources Minister Seamus O'Regan has described that money as a “generational investment” that will help “create the future.” In Parliament, O'Regan said the project would create “hundreds of millions of dollars in construction contracts for Indigenous businesses,” while “helping to reduce coal plant emissions in Asian markets.”

In March, National Observer reported that this claim — that shipping the product to China to displace coal-fired electricity generation there would reduce carbon pollution by “60 to 90 million tonnes annually” — stemmed from a “theoretical” calculation made by an adviser hired by LNG Canada, and that didn’t take real-world factors into account.

A report released last month by sustainable development consulting firm Horizon Advisors argued that a Canadian Crown corporation’s support for the Coastal GasLink pipeline was undermining the country’s own climate goals of cutting carbon pollution 30 per cent below 2005 levels by 2030 and reaching “net-zero” pollution by 2050.

A spokesperson for LNG Canada said its joint venture participants "took a long-term view when they made the decision to proceed with LNG Canada understanding very well long-term LNG demand growth to support decarbonization from coal fired electricity, industrial and residential heating and to provide baseload power for renewable power."

The commitment to the project by the joint venture participants, which are British-Dutch firm Shell, Malaysia’s Petronas, Japan’s Mitsubishi, PetroChina and the Korea Gas Corporation, "has not wavered" said the spokesperson.

National Observer asked O'Regan's office whether the survey's results changed the minister's stance on the industry in Canada. The office could not offer a response before publication.

This is pretty fantastic- 1,000 people are working on the Coastal GasLinnk pipeline right now and employment will grow to 2,500 by the end of the year. #LNG #LNGforCanada #cnpoli https://t.co/ScxTngljkA

Over the last year, the amount of LNG terminal capacity under construction around the world jumped from $82 billion US to $196 billion US, according to the survey. This is due to an anticipated surge in demand for natural gas from places like China, Japan, Europe and Southeast Asia.

But the economic atmosphere that led to these massive investments is running up against “climate and economic reality,” the survey states. “Even before the twin shocks of the COVID-19 pandemic and global gas price collapse, LNG projects were facing an increasingly difficult economic environment,” it said.

Gas markets were becoming oversupplied, prices were falling, and renewables, bolstered by better battery technology, were becoming more competitive. With the added drop in demand and worksite restrictions from COVID-19 this year, not to mention public opposition, some companies have reconsidered investment decisions.

Worldwide, the failure rate for proposed LNG export terminal projects between 2014 and 2020 is 61 per cent, the survey calculated.

Last month LNG Canada and other energy firms launched the Canadian LNG Alliance, to “reflect the critical role LNG has to play in Canada's COVID-19 economic recovery,” as well as “economic reconciliation” with Indigenous peoples and Canada's “clean energy transition.“

The group argued that LNG projects in British Columbia would produce “among the world's lowest-emissions intensity LNG“ as they would be partly powered by hydro-electric power.

But the survey suggests that the reputation of LNG as an “environmentally benign” fuel that is less dirty than coal has been debunked by scientific studies highlighting the serious impact of methane on global warming.

Methane, a greenhouse gas that is the main component of natural gas, is 86 times as powerful as carbon dioxide in trapping heat in the atmosphere over a 20-year period. Scientific studies have connected a rise in global methane levels with the fracking boom, and say this rise in atmospheric methane is undercutting efforts to hold the global temperature rise to 2C above pre-industrial levels.

A 2017 peer-reviewed study in the journal Atmospheric Chemistry and Physics found that methane leaks from B.C.’s oil and gas industry were at least two and a half times higher than provincial estimates.

If only we could count on

If only we could count on government decisions based on rational financial projection ( only green is growing) and science based knowledge on future planet warming never mind ecosystem collapse, I would sleep better and go through each day with less dread.
But T and Trp are both worshipping at the cult of fossil it seems and keep hoping that wishing will make reality go away. I don't have any faith they will chose well in how they invest in the coming months.
Hope I am wrong

Somewhere, there's a guy wearing a priest's robe with a little silver US dollar bill on a chain around his neck, brandishing fistfuls of money and shouting at them, "The power of campaign contributions compels you!"

Thank you for this article. I'm happy to hear the investment outlook for LNG is worsening and I hope it stays that way. It was a bad idea to begin with, but here in BC Christy Clark and her gang grabbed onto the idea, touting it as "climate friendly." Hopefully now the problem of methane emissions will become more well-known. But why isn't more attention drawn to the fact that fracking for shale natural gas causes contamination of huge amounts of water? Then the polluted water is stored in vast toxic ponds in a similar manner to the tar sands. I understand that enormous nets have to be constructed above these ponds to prevent waterfowl from landing in them and dying. What kind of madness has come over a society that does such things?!

I understand why Christy

I understand why Christy Clark was into it. But our NDP premier is pushing it hard. And the NDP are a minority government--the Greens who keep him going are barely grumbling. The NDP aren't a terrible party but we really need to put their feet to the fire on some issues.