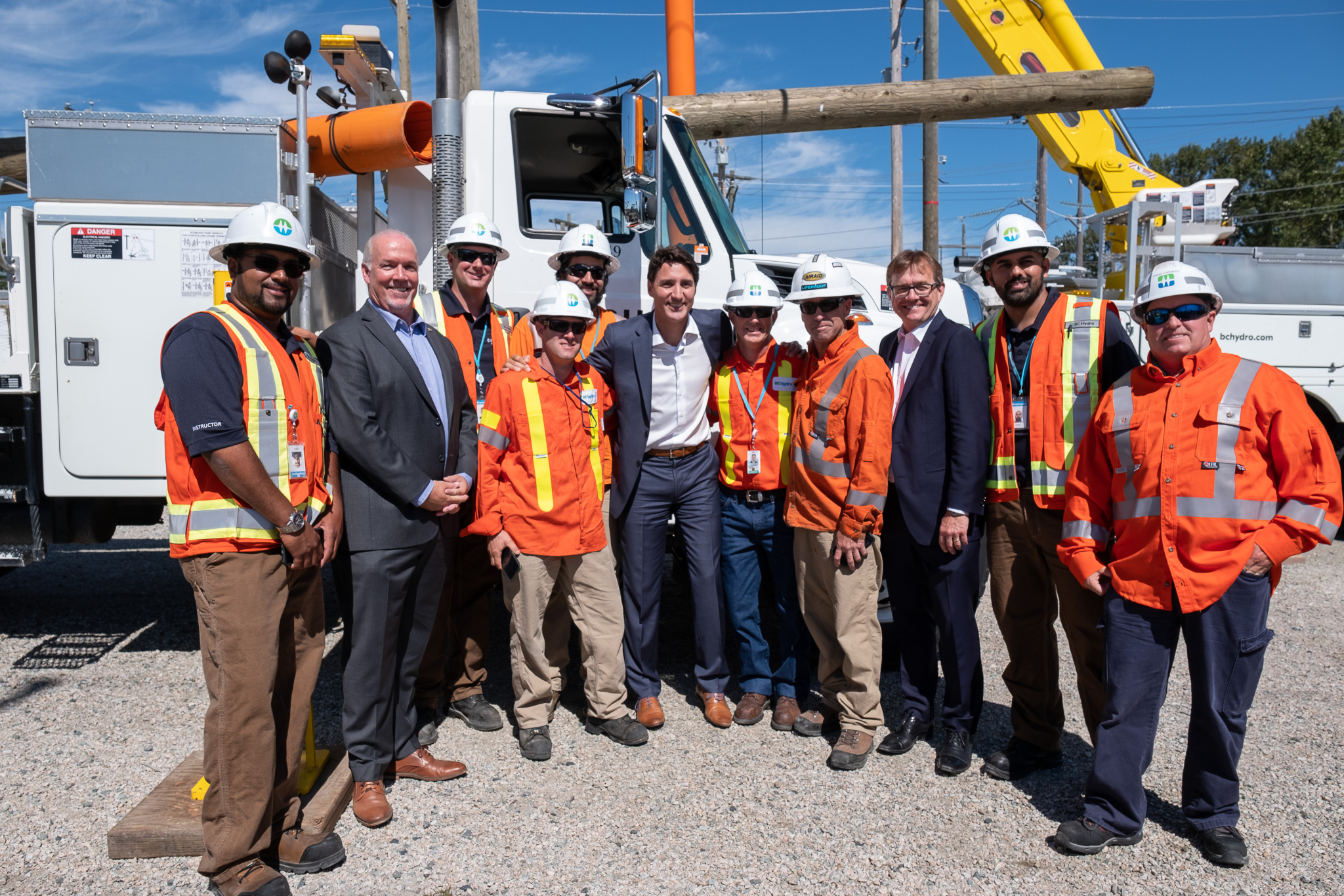 On a sunny day in late August, Justin Trudeau and John Horgan posed for photographs at a hydro-electricity training site in Surrey, B.C., just outside of Vancouver.

The prime minister of Canada and the premier of British Columbia were there to congratulate each other on an agreement to provide a combined $680 million to help the province’s natural gas industry switch to using electricity to power its operations.

The two leaders made their best efforts to present the funding as a step toward a greener future — one in which clean electricity, rather than fossil fuels, powers everything from cars to space and water heating.

But while the electrification of industry is a broadly positive step to reduce our carbon footprint, public money spent extending the scope and life expectancy of natural gas production in British Columbia is greenwashing at its worst, critics say.

The problem is that electrifying the activities of the province’s oil and gas industry “is like putting lipstick on a pig,” said Andrew Weaver, the leader of the BC Greens and one of three Green legislators whose confidence vote maintains Horgan’s minority NDP government.

Most of the province’s existing wells lean heavily on hydraulic fracturing, a.k.a. fracking, to extract oil and gas from massive shale deposits in the Montney basin in northeastern B.C.

The process of producing and transporting gas releases methane, the main constituent of natural gas, which is 34 times as potent as carbon dioxide over a 100-year scale at trapping heat in the atmosphere, according to the Intergovernmental Panel on Climate Change.

Recent scientific studies (including one released earlier this year by the David Suzuki Foundation, another from Cornell University and this one (PDF) commissioned by the B.C. government) show far more of these so-called “fugitive” emissions are being released than previously thought.

None of this was mentioned in the memorandum of understanding the two governments signed last month.

“It was so Orwellian. They do not even mention it is fracking,” Jens Wieting, a senior forest and climate campaigner with conservation group Sierra Club BC, said of the dual news releases that accompanied the memo. 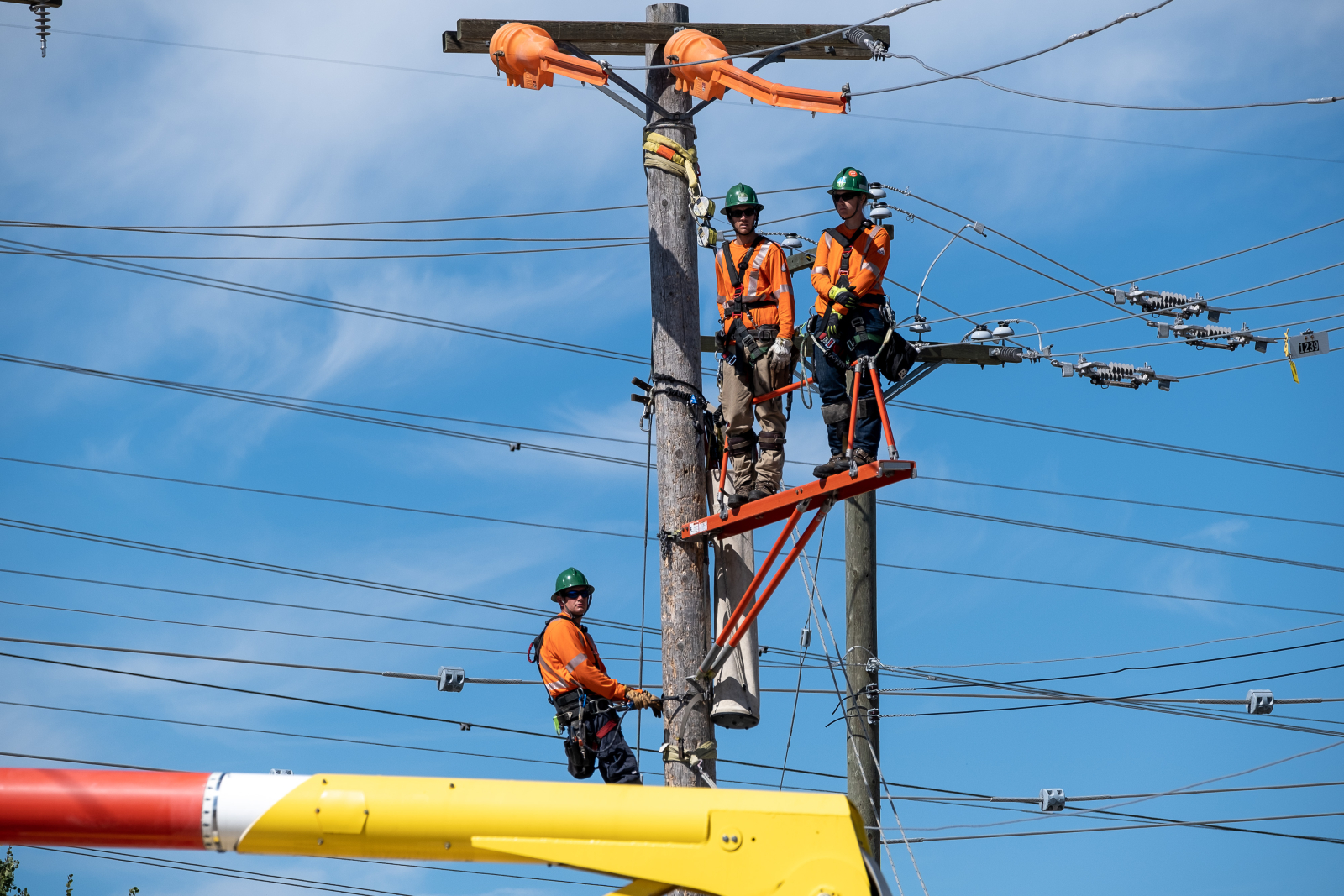 Workers watch a policy announcement from afar at a hydro-electricity training centre in Surrey B.C. on Aug. 29, 2019. B.C. Government Photo

Instead, government and industry present liquefied natural gas (LNG), which is gas that has been cooled to liquid form for storage and transport, as a suitable transition fuel between the dirty coal of the past and the clean renewables of the future.

The federal government itself has kicked in $275 million towards the giant, $40-billion LNG Canada project, in Kitimat, B.C., for example.

“By moving to clean power — a process referred to as electrification — we will avoid emissions and position Canada as a supplier of the world’s cleanest natural gas,” Trudeau’s office said in its statement on Aug. 29.

Later this month, a delegation will visit Tokyo to pitch the compelling economics of Canada’s LNG infrastructure projects and supply agreements, as well as brief business and government officials about Asian import and investment opportunities.

Coming into an election campaign that is likely to be fought at least in part on issues relating to climate and the environment, the Liberal government's actions are not entirely different from the environmental platform of Conservative Leader Andrew Scheer.

That plan reads in part that natural gas is a "cleaner" source of energy and that "exporting Canadian LNG to replace coal can lower global emissions."

The federal NDP leader, Jagmeet Singh, came out in opposition to fracking earlier this year, putting him at odds with the provincial NDP, after losing a Vancouver-area by-election to the Greens.

Asked why the federal government was allocating funds to support the construction of new natural gas projects in B.C., a spokesperson for Natural Resources Minister Amarjeet Sohi said that the global transition to completely decarbonized energy will take time.

"Countries are looking for the cleanest natural gas to displace coal, and Canada can be that choice — all while reducing emissions and creating well-paying jobs at home," Alana Kiteley said.

She said Canadian resource development was being addressed in connection with a national plan to fight climate change, including by creating methane regulations, a clean fuel standard, a price on carbon pollution and other measures.

"Canadians expect our resources to be developed in a way that ensures economic growth and environmental protections go hand-in-hand," she said.

The government passed regulations that aim to cut methane emissions from the oil and gas sector 40 to 45 per cent below 2012 levels by 2025. That will cut 232 megatonnes of carbon pollution through 2035, it estimated. But the rules are being phased in over several years.

Kiteley did not directly respond to questions about actions being taken to determine the true emissions profile of the province's existing LNG and fracking industries, or ensure issues with leakage are not repeated in new projects, saying that was a provincial responsibility.

A spokesperson for the provincial Ministry of Energy, Mines and Petroleum Resources did not respond to questions before publication.

'Not a single dollar can be misused'

The new funds will initially advance electrification of projects including the Bear Mountain to Dawson Creek voltage conversion and the North Montney Power Supply project.

But Wieting argued LNG will prove to be “very likely as bad as coal” for a heating planet, and there is no room to boost its expansion if humanity is to avert the worst effects of the global climate crisis.

“Making no mistakes means that every public dollar spent on energy projects must be in the context of efficiency, renewable energy,” he said in a phone interview. “And not a single dollar can be misused to continue to expand fossil fuels production.”

“There is no reason why taxpayer dollars should be used to accomplish what could be done through regulating the industry,” said Julia Levin, the climate and energy program manager at Environmental Defence.

"With this move, the governments are once again throwing public dollars towards supporting the very industry that is quickly putting the province’s climate targets out of reach," she said.

The shift to a low-carbon economy is already "underway" and sectors like oil and gas, as well as the banks that loan money to them, are exposed to risks from climate change that could spill over into destabilizing "fire sales," the Bank of Canada concluded in May.

Wieting also said the Green-supported NDP government would be at risk if Horgan does not “listen to climate scientists and understand the escalating warning signs of our planet.”

Weaver, meanwhile, isn’t yet prepared to pull his party’s confidence from the government, which could prompt a snap election.

“My job as leader of BC Green Party is to act as the adult in room," he said.

"Right now, we’re pushing policy in a direction we think it should go.”

A footnote to the LNG

A footnote to the LNG industry is that ships carrying it are floating bombs, massive bombs. Getting them to explode will take something like a missile strike -- we hope they won't blow from grounding, ramming, unsuspected stress points, poor construction, etc. -- but in our nutty world, it's easy to imagine various scenarios by which such great fireworks can happen.

If B.C. were building bombs, by that name, it seems likely there would be a lot more safeguards in place than are put on the shipping industry.

The same problem exists in

The same problem exists in Alberta, where fracking is a word seldom heard, but is everywhere.

Anyone who believes that we

Anyone who believes that we live in a democracy needs to wake up. All of our democratic institutions were captured long ago. The government, the civil service, the media, universities, the courts - all work for corporations. We have to take our power back or perish at their hands.