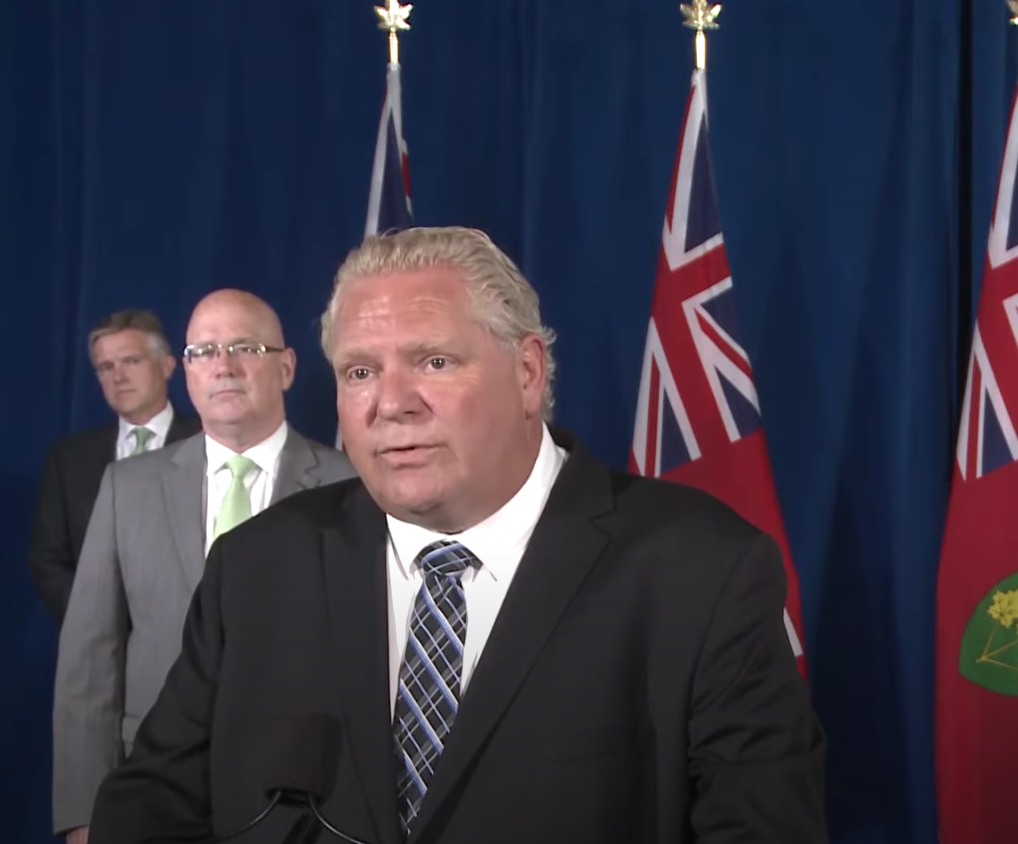 Premier Doug Ford said “clean air” and “clean lakes” are a priority for his government, but said Ontario’s 50-year-old environmental assessment process is too slow.

If passed, the changes would mean projects only need an environmental assessment if the Progressive Conservative government decides they should — the current law applies to most projects by default. For those that do need environmental oversight, the government is proposing a “streamlined” process.

“We’re losing jobs,” Ford said. “We aren’t going to dodge (environmental assessments) or anything. We’re going to make sure we strengthen them, but we’re going to do them quicker and smarter.”

“We are taking the lens of looking at major projects and their impact on the environment versus smaller projects that may have little or no impact,” he added.

“We have to deal with, obviously, big projects, but should the environmental assessment for a landfill site be the same as replacing a box culvert in a rural community?”

The full impact of the 188-page recovery bill — which would alter 20 pieces of legislation, touching on everything from education to the judicial system — wasn’t immediately clear Wednesday. The Ford government also weakened the current environmental assessment process last year.

Sarah Buchanan of the green non-profit Environmental Defence said she doesn’t see how the environmental assessment changes could be made without compromising the health of the environment. It’s “rash” to rewrite such a significant policy during a pandemic when the public’s attention is elsewhere, she added.

“There’s a reason these regulations were put in place,” Buchanan said. “Changing the entire environmental assessment process and significantly loosening it will have a huge environmental impact.”

“Protecting forests, farmland and drinking water is not red tape,” he said in a statement.

“The premier wants us to believe that we need to destroy the places we love to get the economy moving. He’s wrong.”

Environment Minister Jeff Yurek was not at the daily briefing where Ford and key cabinet ministers announced the bill. His office did not immediately respond to questions about why he wasn’t there, and didn’t respond to a request for an interview about the environmental changes.

In Ontario, the Environmental Bill of Rights mandates that governments consult and notify the public about legislative changes that affect the environment through the Environmental Registry. The government did not post a bulletin about the changes in the omnibus bill before tabling it Wednesday.

Chelsea Dolan, a spokesperson for the Ministry of the Environment, Conservation and Parks, told National Observer the government included a measure in the bill that exempts it from the duty to consult and notify the public in advance.

“To ensure that these proposed changes and subsequent regulations can be implemented quickly to support recovery efforts, the proposed legislative amendments include a provision making the amendments not subject to the minimum 30-day posting requirement under the Environmental Bill of Rights,” she said in a statement.

The government will post a notice on the registry for the sake of “public awareness” later Wednesday, Dolan added. The government also consulted the public on broad plans to change environmental assessment rules earlier last year, she added.

It’s troubling that the government wouldn’t consult the public before pushing through the bill, Buchanan said.

“People should have the opportunity to have their say.”

Here’s what @fordnation and @SteveClarkPC had to say today about proposed changes to how Ontario conducts environmental assessments, part of the omnibus economic recovery bill introduced today. #onpoli pic.twitter.com/vb9Qk8w3QG

‘We can do this without giving a free pass to polluters’

On Wednesday, Ford said the bill is only the beginning of the province’s recovery from COVID-19, which caused widespread economic shutdowns this spring.

“It lays the foundation for a strong recovery for Ontario,” he said. “We’re already working to get shovels in the ground faster.”

One major cornerstone of the bill was the province’s plan to fast-track transit projects and nearby affordable housing, announced earlier this week.

Though opposition leaders said parts of the bill had nothing to do with the global pandemic — education measures, for example — and called it an overreach, Ford said “everything’s related to COVID recovery.”

“Schools are part of the COVID recovery. Again, the justice system, the backlog is staggering, is part of COVID recovery,” he added.

The bill is about “getting the government out of the way,” Ford said.

But in other ways, the bill also grants expanded powers to the government.

If passed, it would expand the government’s powers to use Ministerial Zoning Orders (MZOs), a mechanism that allows Clark to override the normal land use planning process — and any potential opposition — to make decisions about how land should be used.

Halfway into its mandate, the Ford government has already used more MZOs than the previous Liberal government did during a decade in power.

Clark and Ford stressed Wednesday that the bill contains measures that stop the expanded powers around MZOs from being used in the protected Greenbelt area of southern Ontario. The proposed changes to the orders could be used to fast track contentious developments and contribute to urban sprawl, Environmental Defence said in a statement.

“You can destroy natural spaces without touching the Greenbelt,” Buchanan said. “There's a lot of other places developers want to build.”

Environmental Defence also sounded alarms about a measure in the bill that would require the government to offset any new regulatory burden on industry with slimmed-down rules elsewhere. Viewing environmental rules as “red tape” that needs to be cut is what led to issues like the Walkerton crisis, when lax water guidelines contributed to a public health disaster in 2000.

“It’s not a good way to make policy,” Buchanan said.

Schreiner said there are other ways to boost the economy post-COVID.

“I support better regulations to build affordable housing and transit faster and smarter,” he said in the statement.

“But we can do this without giving a free pass to polluters or giving away farmland to land speculators.”

In other countries such as Denmark, Germany and the United Kingdom, leaders have outlined intentions for a green economic recovery that would boost clean technologies. That kind of vision is missing from Ontario’s plan, Buchanan said, which means it’s not a good long-term strategy as the world shifts towards a lower-carbon future.

"It just seems like there hasn’t been thought put into how we position ourselves to be a place that’s a leader in the future," she said. "It’s just, 'How can we get shovels in the ground for the same old projects?'"

This story was updated to include additional reaction from Environmental Defence and Ontario Green Party Leader Mike Schreiner, along with additional context about the contents of the bill.

"... strengthen them, but we’re going to do them quicker and smarter.”

Doug knows from his Toronto City Hall days being the puppet-meister that what keeps projects down is his own standing in the way. Toronto's projects were planned and ready to go, and they had funding. Till Fords.

Problem seems to have been his favored "winners" wouldn't likely be provided for under the plans that were ready to go.

In Fordese that means we know we're not getting elected in Toronto ever, so we'll take what we want before getting ridden out of town.

There is only one thing in this premier's announcement I agree with. Ontario's 50 year old environmental assessment process is "too slow". We've had 50 years of experience, the growth of scientific knowledge, the exponential growth of environmental understanding and it should by now be obvious to every one except the exploiters and extractors and polluters what is environmentally sound and what is not.

Our assessment process should start with some fixed principles that cannot be breached, and with some where mitigation (enforced) can be tolerated, and others where already destroyed land must be recycled, reclaimed before we "bust sod" on virgin, wild, unsullied, sensitive terrain.

It is not really the assessment process that is at fault here, it is the savage, irredeemable destruction the developers, the extractors, the polluters wreak through their scofflaw refusal to honour agreements, to clean up their unholy messes, to refrain from bribery and corruption to achieve their profits. The assessment process would proceed rather more smoothly, were it not for the intransigent mind set of capitalist profit.

Humanity's doctrine of Capitalism, as practiced by every society, democratic or totalitarian is the planet's most destructive force. That and human overpopulation and grossly inequitable over consumption places us squarely where we are now - in dire straits.

The apologists for continued capitalist destruction, masquerading as political leadership, are afflicted with the same old, same old, zero sum mentality requiring humanity to grab as much "wealth" as quickly as possible before it all runs out.

There are other models of leadership - societies that value stewardship and living in harmony with the natural world. Human greed, our original sin, is still doing its very best to exterminate these societies using the four horsemen of the apocalypse.