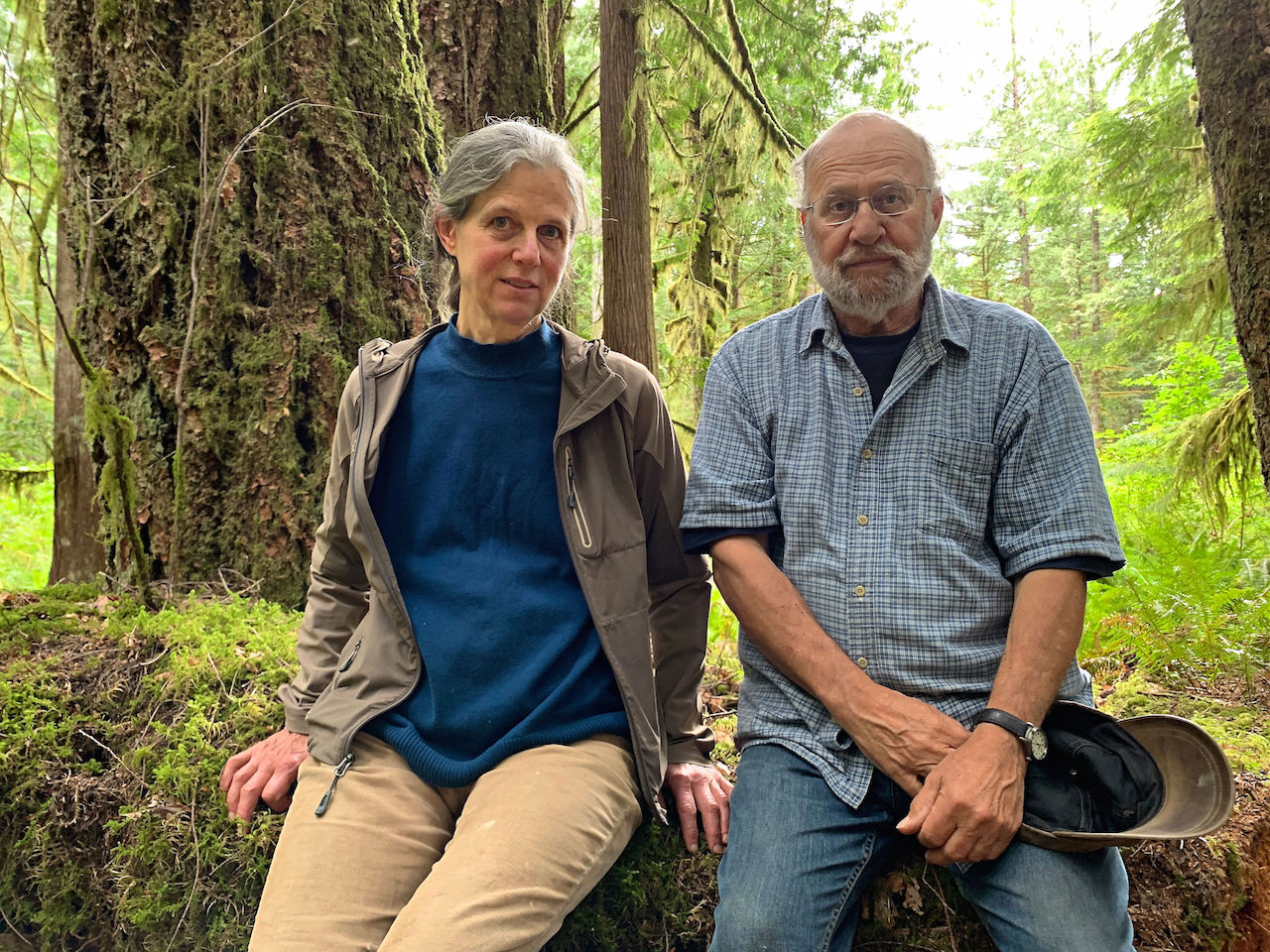 Lannie and Ralph Keller sit in the forest in Lot 302 on Read Island that was saved from being clearcut by their tiny coastal community. Photo: Rochelle Baker
Previous story
Next story

Yet the 20-acre parcel of timber symbolizes the achievement and ongoing battle by a tiny coastal community to protect as much mature forest as they can on their remote B.C. island.

“We just couldn’t bear to see yet another clearcut,” said Read Island resident Lannie Keller of the Surge Narrows community, which managed to raise $150,000 inside of four months to protect 20 acres of forest earlier this year.

And the community is working to buy another parcel with an important riparian zone to complement their recent acquisition and further protect Read Island’s ecologically sensitive areas. This time it's a spot where the forest intersects with streams and swampy areas critical to salmon and amphibian habitat.

“There is a remaining 128 acres of wetland and mature trees in middle of the island, which would extend our protected area in a lovely and significant way,” said Lannie, who along with husband Ralph, sparked the community’s most recent efforts to conserve their forests.

Approximately 80 residents live full time on Read Island — one of several “outer islands” wedged between Vancouver Island and the B.C. coast in the northern reaches of the Straight of Georgia — which is only accessible by boat or float plane.

And the community of Surge Narrows — which boasts not much more than a public dock, a small post office, a small school, a community hall, and an abandoned, ramshackle clapboard store — is tucked into the Read Island’s northwest flank.

Despite its small stature, Surge Narrows acts as a community hub for Read Island, as well as for residents of surrounding Maurelle, North and South Rendezvous, and Sonora islands.

“This environment is so incredible...It’s special, and it deserves protection," Read Island resident Lannie Keller says of her tiny B.C. coastal community's efforts to purchase and preserve its rainforest habitat.

So when nearby Lot 302 went up for sale last summer, and the Kellers heard the mixed mature forest was drawing the interest of a logging company, the couple knew they had to act fast.

“It was a beautiful piece of treed land along the main road where people travel to get mail, to the school or the dock,” said Lannie.

The parcel was also adjacent to the island’s John Kim Ecological Sanctuary and would create a green corridor from the Surge Narrows dock to the boundary of the island’s existing Fish and Forest Reserve at the headwaters of two important salmon streams, Ralph added.

“We thought, ‘Oh man, we better do something right now,’” so we went back and wrote them a cheque,” Lannie said.

Lot 302’s owners, long-term residents, were willing to sell the land to the community at a reduced price.

So the Kellers, through their local kayaking business, Coast Mountain Expeditions, offered a $50,000 downpayment and guaranteed the entire $150,000 purchase price if the community decided not to come on board.

But the community was all in.

The Kellers presented the idea to the Surge Narrows Community Association (SNCA), representing about 130 permanent residents on the surrounding isles.

“The response was super enthusiastic,” said Lannie, who wasn’t surprised by the tight-knit community’s response, but rather by the speed at which the remaining funds were raised.

“We were astounded. It just happened so fast,” Lannie said, adding the community, which doesn’t have deep pockets, gave generously.

“Sometimes it was to the point where we said, ‘You can’t do that. You don’t have that much to give,’” said Lannie, noting one resident was donating half her limited pension to the project.

But what really shocked the community was the response from the outside world, the Kellers said.

“The funding came from near and far,” said Lannie, adding people donated from across Canada and even internationally.

“Some had distant links to Read Island, but some had absolutely no connection at all, but said (forest conservation) resonated with them.”

“Most people today love living forests. The wilderness and the feeling they exude,” he said.

“As soon as you clearcut it, lay it all to waste and destroy the wildlife habitat, nesting sites and the wetlands, it threatens us personally. Whether it’s British Columbia or Brazil, a clearcut has become the international symbol of the destruction of the environment.”

Read Island, like most of British Columbia, has a long, history with clearcut logging, Ralph added, noting the practice is ongoing on the island's woodlots.

In the mid-1980s, just a couple of years after the couple arrived on the island, 1,200 acres of mature low-elevation rainforest was razed to the ground, he said.

“To be able look across the island for several kilometres and not see a single tree was pretty impactful for all of us” Ralph said.

It led to the community working together for the first time in 1992 to purchase a lot from Raven Forest Products to create the island’s first reserve to try to protect the salmon streams.

But in that instance, the effort took three years to raise $78,000 for the 20-acre lot, Lannie said, adding people had relatives' kids knocking on doors in Vancouver for spare change.

“We were exhausted afterwards,” she said.

But this last time around, an international conservation organization arrived on Read in February to explore whether it would back the purchase of Lot 302, only to find the fundraising was already done, said Lannie.

Now the German-based Wildness International is partnering with the Surge Narrows community to provide the bulk of the funds to try to purchase the wetland Lot 309, Ralph said.

“We’re waiting on the decision of the landowner, after which, we’ll draw up a co-operative agreement,” he said.

German society is passionate about protecting the world’s forests because they have so little of their own wilderness left, MacDonald added.

Aside from occasional visits from biologists or student groups to study the ecosystems at their sites, not much else will happen other than the foundation pays taxes in perpetuity, he said.

“Essentially, the concept is: We buy the forests and leave them alone.”

The Kellers said the Surge Narrows community is also waiting to hear from the landowner to move forward.

With the experience gained through their kayaking company, they know the wilderness on and around Read Island is precious, the Kellers said.

“This environment is so incredible, and we’ve had thousands of people visit from all over the world over the years. And they’ve said they’ve never been anywhere so beautiful,” Lannie said.

“It’s special, and it deserves protection.”

the other question lurking is

the other question lurking is ,"why is this rare rainforest not protected by the BC government as heritage, as critical habitat? as green economy gold? as. as. ?"
It boggles the mind that at this juncture , short term rip and ship is not an EMBARRASSMENT to the BC government.

It's absolutely mind-boggling, to me, that citizens, ENGOs, and lawsuits are required to accomplish what our governments ought to be doing for the long-term health of our biosphere -- to stop the large-scale destruction of what supports the health of us all, economically, socially and biologically. Governments are ignoring science and acting in their own very short-term self-interest at the expense of life on earth. It's tragic and stupid.