Conservatives don't want to bring down Liberal government over WE 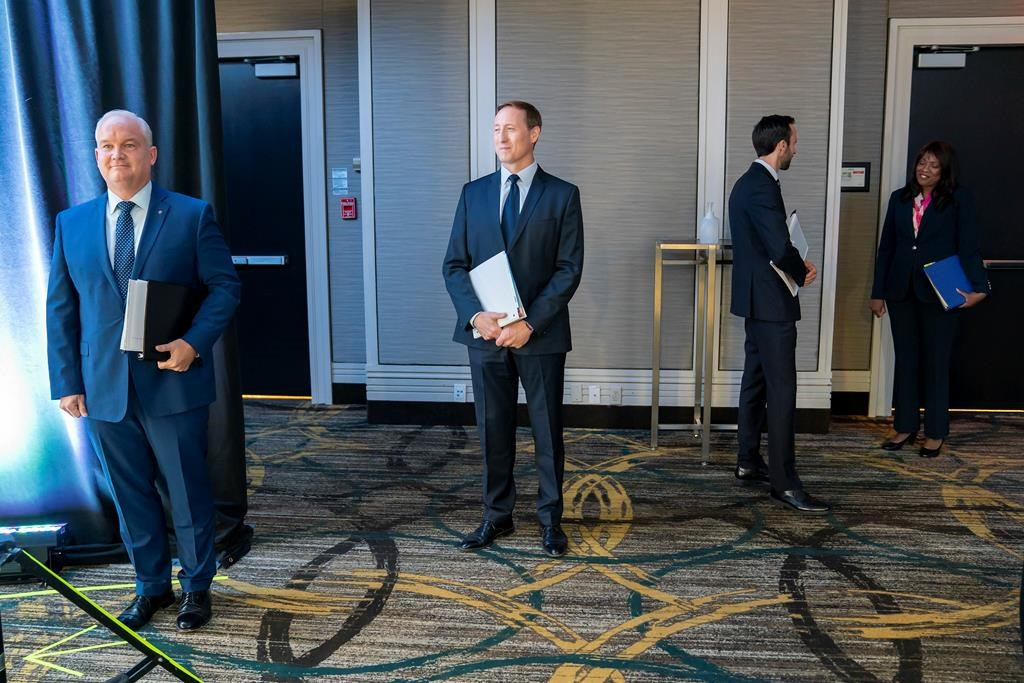 Current leader Andrew Scheer is in his final weeks in the job.

Party members are now voting for his replacement with the winner to be announced in late August.

Meanwhile, the issue is not going away.

The ethics commissioner has been called in to see if Trudeau broke conflict-of-interest law in awarding a multimillion-dollar contract to the WE organization, given Trudeau's long-standing family ties to the organization.

The commissioner is also being asked to probe Finance Minister Bill Morneau's ties as well — one of the minister's daughters works for the organization.

The Liberals, and WE, have said there is no direct link between the awarding of the contract to run the $900 million Canada Student Services Grant program and the organization's connections to the Trudeaus.

The Conservatives also say that revelations Trudeau family members have been paid by WE for speaking engagements in the past elevates the seriousness of the matter. The party says the police should investigate for possible fraud.

Trudeau himself was never paid.

The investigation by the ethics commissioner into the SNC-Lavalin affair was requested in February 2019 and completed in August of that year.

The Senate expenses scandal first broke in 2012 and it took two years for criminal charges related to fraud to surface in that case. Former Conservative senator Mike Duffy was acquitted on all of them in April 2016.

So, given that the Opposition Conservatives will have a new boss while the WE story likely continues to percolate, how will Scheer's replacement seek to proceed?

The Canadian Press asked all four leadership candidates how they would deal with the scandal.

The Toronto lawyer said the ethics commissioner has proven himself capable in the past of getting to the bottom of Trudeau's scandals and she trusts him to do that job here as well.

"The problem is that every time the ethics commissioner proves Trudeau has broken the rules, he just shrugs and moves on," Lewis said in a statement.

"The only way to hold Justin Trudeau accountable is for voters to vote him out. I look forward to leading the charge and replacing him with an honest and ethical government."

Lewis does not have a seat in the House of Commons. If she wins, she would have to appoint someone to be the parliamentary leader until she could get elected.

MacKay's wife, Nazanin Afshin Jam, a human rights activist, has spoken at WE events. His campaign says she has never taken money from the organization.

In an interview, MacKay said the WE controversy raises questions about the need to broaden and strengthen the power of the ethics commissioner, so if there's a finding a politician broke conflict of interest law, they could actually be penalized.

He also suggested that a stronger ethics screen might be required for whomever is prime minister to ensure there can be no blurring of lines between a prime minister's private life and public role.

In the meantime, MacKay, a former justice minister, said he thinks a criminal investigation into the WE contract could be warranted under Section 122 of the Criminal Code, which is breach of trust involving government officials.

The purpose of the section is to ensure government officials do not abuse their authority or their office, MacKay said.

By being in the cabinet room when the decision was made, knowing their family connection to WE, is a very serious thing, MacKay said.

"It's essential we keep confidence in public office holders," MacKay said. "This undermines that."

While it is the kind of issue that could result in a motion of non-confidence in the Liberal government, it's not that simple, MacKay said.

"We can't lose sight of the bigger picture here which is the economic and health crisis that still rages on as a result of COVID-19," he said.

"This is going to undermine severely the prime minister's legitimacy and ability to govern throughout this period."

MacKay also does not have a seat in the House of Commons. What levers of parliamentary power he might want pulled would have to be done by someone else.

O'Toole has suggested the scandal brings with it the threat of a fall election.

When his campaign was asked whether he would seek to topple the government over it, a spokesperson did not directly answer the question, repeating only that they think the chances of a fall election are higher.

O'Toole supports his party's call for a criminal investigation. In an email, campaign spokesperson Melanie Paradis said that given O'Toole already has a seat in the House of Commons, he would be ready take on Trudeau on this issue from "day one."

"As leader, Erin will stand up for Canadians and get to the bottom of this corruption," she said. His campaign did not say how he would do that.

O'Toole's children have also attended WE events and he has spoken at one in his riding. His campaign said his family has never financially benefited from WE.

Sloan is also a sitting MP. His campaign did not return two requests for comment on what he would do to address the issue.

Tories ask watchdog to review contracts between Ottawa, WE Charity